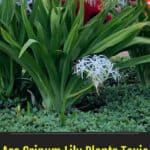 Many, such as Crinum asiaticum, have become popular fixtures in gardens, where their large size and attractive, star-shaped flowers can steal the show.

Able to tolerate cooler climates while thriving in warmer ones, mature plants of crinum lilies are common in the southern States where Crinum americanum tends to be king.

These perennials are perfect for water gardens or near water features but do equally well in a garden spot that has consistently moist soil.

Crinum lilies may be popular, but before bringing one into your home or garden, it’s essential to know not only how to care for the species you’ve chosen but also whether it’s safe for you and your pets.

Is the Crinum Lily Poisonous or Toxic?

As with all lilies, crinum lilies (the entire plant) are toxic to humans and pets alike.

The entire genus can be deadly to cats, while symptoms range from mild to moderate for dogs and humans.

It is unknown whether the genus is toxic to horses, so use caution when planting.

What Parts of the Crinum Lily are Poisonous or Toxic?

All parts of crinum lilies are toxic if consumed.

A few grains of pollen is all it takes from some species to cause kidney failure in cats.

Perhaps the most toxic part is the bulb, which can grow massive and has earned many species the nickname of “poison bulb.”

Contact with the Crinum sap may cause dermatitis in some individuals.

What are the Symptoms of Poisoning?

Humans tend to have more mild symptoms after ingesting, although the severity increases for children due to their size.

In dogs and cats, this list is larger and more severe, including such potential symptoms as;

Note that not all symptoms will occur based on the individual species of crinum and that these symptoms may take 12 hours or more to appear.

All symptoms are caused by the presence of a variety of alkaloids that the body is unable to process.

Galanthamine is the most common alkaloid in crinums and has some small claim to fame for its role in Alzheimer’s research.

However, in large doses, such as in most crinums, the alkaloid can become a nerve toxin.

How To Protect Yourself While Handling Crinum Lilies

When handling any plant that may be toxic or cause allergic reactions, Wearing gloves is always a good idea.

Even if you don’t have a reaction, you should thoroughly wash after handling to avoid the sap getting into a pet’s fur or contaminating food.

Surround your crinum lily with smaller plants that cats don’t like to deter them from getting within snacking distance.

When your child or pet has been in the vicinity of a crinum lily, it’s best to check for any signs of munching, especially in the case of cats where you may not discover severe symptoms before permanent damage is done.

If you suspect your pet or child has ingested a crinum lily, call the poison center or visit the emergency vet, bringing along a sample of the plant.

Remember, each species of crinum lily is different in terms of exact toxicity levels, but all are toxic to some degree.