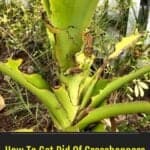 Crinum asiaticum, better known by the common name crinum lily or spider lily, is both beautiful and deadly.

These 4′ to 6′ foot tall, blade-leafed lilies are a popular, beautiful landscaping plant and have become naturalized throughout much of the Southeastern United States.

Asiaticum is only one of more than 109 varieties of crinum lily found all over the world.

You’ve probably seen a few different species of crinum lily at one point or another, especially in the warmer USDA hardiness zones.

You may also have seen the devastation to crinum lily populations by a single pest: the lubber grasshopper.

How To Get Rid of Grasshoppers Eating Crinum Lily

If there’s a nemesis for crinum lilies, it’s the Eastern lubber grasshopper.

Consisting of several regional species, these slow-moving, flightless pests will obliterate crinums wherever they appear.

What Are Lubber Grasshoppers?

The name “lubber grasshopper” is given to several different species of large, slow-moving grasshoppers with similar characteristics.

Lubbers can grow about 2 to 3″ inches long, with males being slightly shorter than female grasshoppers.

They move slowly and eat less than many other grasshopper species but still do major damage due to large populations.

The two types of lubber are:

Now considered a monotypic genus (only one species), these are native to the southeastern states, with populations in:

The immature grasshoppers the nymphs are black with red, orange, or yellow stripes, while adults either retain this appearance or become dull yellow to bright orange with black markings.

This genus also included the southeastern lubber (Romalea guttata), which has since merged with microptera.

Found in Arizona, Mexico, New Mexico, and Texas, the females can grow up to 2 ¾” inches long, although the size can vary by region.

This monotypic genus is mostly black, with black and yellow forewings that display green markings. The hindwings, which males often leave on display, are red with black borders. Even the head and antennae have orange markings.

You can get rid of lubbers in several ways, but these methods can become less effective as the grasshoppers get larger and more numerous.

One simple method is to pick these slow-moving critters right off of the plant.

Get rid of them by dropping them into a deep bucket full of soapy water.

While grasshoppers are generally edible and highly nutritious, lubbers feed on highly toxic plants, so snacking on them is not a good idea.

Carbaryl-based pesticides (Sevin) work fairly well but can harm beneficial insects, so go with a safe and natural solution, such as neem foliar sprays.

You will need to spray at dawn or dusk to ensure it’s gone before bees and other pollinators become active.

Be sure to get it directly on the grasshoppers, as the spray clogs their airways and suffocates them.

You can also dust your crinums with diatomaceous earth, although the microscopic fragments become ineffective when wet and dislodged by the wind.

By far, the best method is a neem soil soak, which your lilies will absorb.

The Azarchtin in raw neem oil becomes a systemic insecticide to protect the plant from piercing and chewing bugs (such as lubber grasshoppers) and even some microbes and fungi.

To make it, just emulsify a gallon of water with 1 teaspoon of Dawn dish liquid or pure castile soap, then add 1 tablespoon of 100% percent cold-pressed raw neem oil.

Pour 2 to 4 cups onto the soil around your lily in a radius roughly that of the root spread.

The soil soak will remain effective for up to 22 days and may be reapplied every 2 to 3 weeks as a treatment or preventative against hundreds of pests.

Be warned. The soil soak won’t kill the grasshoppers immediately. Instead, it causes infertility, loss of appetite and can prevent nymphs from reaching adulthood.

As a result, the population will slowly die of starvation while being unable to reproduce.

Female lubbers deposit their eggs in clutches about 1 to 2″ inches deep in the ground.

Each cluster contains between 30 and 80 eggs, so you don’t want them hatching.

Sprinkling diatomaceous earth around your plants will kill any lubbers that try to deposit eggs or hatch and come above ground.

You can also till between mid and late summer, which kills any eggs deposited.

This method isn’t ideal for the area directly around your lilies but can destroy any eggs deposited further out while you use more focused treatments at the plant itself.

Of course, neem proves the best remedy, as neem soil soaks can kill the emerging grasshoppers.

Neem cakes, the solids left behind from extracting neem oil, are a popular fertilizer additive, usually having a 4-1-2 NPK ratio (it can vary from brand to brand).

Including neem cakes in your regular fertilizer regimen can not only kill lubber grasshoppers but will destroy grubs and harmful nematodes without affecting earthworms.

A Note on Tachinid Flies

Tachinids (true flies belonging to the Tachinidae family) are natural predators that go after lubber grasshoppers.

These flies can be encouraged to visit your garden by planting carrots, dill, and cilantro nearby.

While tachinids are found worldwide, they may or may not be available in your area, so a little research into which (if any) species are available locally may be necessary.