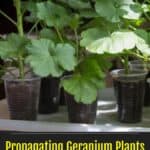 When you want to confuse a garden enthusiast, start talking about propagation and the genus Geranium by referring to the plants simply as “geraniums”.

Despite being the namesake of all geraniums and even the Geraniaceae family itself, this genus of over 400 known species is actually not where the plants most gardeners think of coming from.

This honor goes to the genus Pelargonium (pe-lar-GO-nee-um), a 280-species sister of the geranium that was separated into its own genus in 1789.

Meanwhile, true geraniums are often referred to as “hardy geraniums” due to their higher tolerance to cold and other harsh conditions.

Geranium Propagation: How to Propagate Geraniums?

As you might have already guessed, geraniums and pelargoniums are most commonly propagated using different methods.

Let’s take a moment to look at how each of these genera (and their myriad hybrids and cultivars) are propagated.

Taking on a clumping form that can sometimes trail, hardy geraniums need to be divided every 3 to 5 years to revitalize the plant and prevent overcrowding, both in pots and gardens.

As a result, this is the geranium propagation method most often used with these plants.

When to Divide Geraniums?

The best times to divide your geranium for new plants are either in the fall when uprooting the plant to overwinter indoors or in early spring.

As mentioned, this needs to be done every 3 to 5 years, even if you don’t plan to propagate.

Getting your plant out of the ground can be a little more difficult than repotting one.

Aim your shovel straight down from just outside the radius of the plant’s leaves to ensure you’re getting the roots, then dig straight down and work your way around the plant to loosen it.

Gently remove the clump (don’t worry if a straggly main root snaps, they’ll often turn into their own geranium plant).

Division can give you a lot of leeway in how many plants you want to get from just one.

You can divide the plant in half, thirds, quarters, or at every intersection.

You’ll know when you see an intersection because it will resemble a star shape with stems radiating outwards.

Once you’ve decided how many divisions you wish to make, take a sharp, sterile knife and position it between two of the intersections.

Now cut straight down through the roots and pull the two sections apart.

This may take a little untangling of smaller roots or even a little force.

Whether you’re putting the divided roots into pots or the ground, you’ll want to fill in slowly so you can ensure the roots are spread out a bit.

Once the soil is up to the level it previously was, give the geranium a good drink.

Note that your geraniums will suffer from transplant shock, so a little wilting in the next few days is to be expected.

Pelargoniums tend to prefer being propagated via cuttings, either in soil or water.

Pelargoniums cuttings may be taken at any time during the growing season, but the two most common times are early in spring and (if growing as an annual) late summer to early fall.

Note that spring cuttings will generally flower the same year while late summer cuttings will result in larger plants for next year.

While it’s possible to use cuttings that contain blooms, the best choice is to aim for healthy branches which have no buds or blooms on them.

Using a sharp, sterile knife (shears should be avoided), make your cut approximately 1.5″ to 2” inches down on dwarf plants and 3″ to 4” inches down on full-sized plants.

Make sure your cut is just above a leaf node for the best results.

Remove all but the top pair of leaves, as well as any scales.

Root hormone can sometimes be counterproductive with pelargonium cuttings, so decide if you wish to use it (honey is a safer alternative for those who wish to provide some form of growing aid).

If growing in soil, prepare the container with an equal mix of peat and sand or fill it with organic compost.

Poke a hole and gently insert each cutting, then add a little water directly on the potting mix to moisten and place the plants in a warm spot with indirect sunlight.

Depending on the species or cultivar, the cutting should take root anywhere from a week to a month after planting.

You’ll know when it’s rooted by the new growth and a bit of resistance when you gently tug at it.

If growing multiple cuttings in the same pot, you should now separate them into their own pots so they won’t compete for resources.

This process is nearly identical, but you will do better with larger cuttings (3” inches for dwarfs and 6” inches for full-sized plants).

Fill a vase or glass with room temperature distilled water.

You may wish to put some plastic wrap over the top and poke a hole in it to give the plantlet more stability.

Alternatively, you can fill the glass with perlite or vermiculite before adding the water to provide a soilless medium.

Insert your cutting, making sure the leaves remain above the water level.

Success isn’t as definite as it is with a potting mix, but you’ll know within a month if the plant is rooting properly.

When the roots are 1” inch long, transplant the cutting to the soil.

All geraniums may be propagated by seed (and some hardy geraniums will even self-seed), but this can be a gamble, as you never know what will sprout from the seeds of a hybrid or cultivar.

That said, you should sow geranium seeds in January or February, as they take about 16 weeks to germinate.

Fill some seed flats with a seed potting mix or soilless mix and gently moisten.

Sow the seeds onto the surface and top with a thin dusting of more medium.

Cover the trays with plastic wrap to keep the moisture in and place in a spot with bright, indirect light that remains in a temperature range of 72° to 78° degrees Fahrenheit.

Remove the plastic daily to allow excess moisture to escape and refresh the air.

When a seedling develops its first set of true leaves, transplant it to its own pot.

Water when the soil surface is dry, giving it 12 to 14 hours of indirect sun per day and a weekly dose of balanced liquid houseplant fertilizer cut to ¼ strength.

Be sure to harden the plants for 7 days prior to planting them outside.