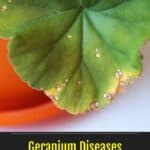 One of the most popular garden plants, geraniums consists of two different genera and hundreds of cultivars.

True geraniums come from the genus Geranium (jer-AY-nee-um) and are often referred to as hardy geraniums due to their higher resistance to cold and other adverse conditions.

Meanwhile, the smaller genus Pelargonium (pe-lar-GO-nee-um) is the one most often referred to as simply “geraniums” despite being separated from the namesake genus over 300 years ago.

Chances are, if you have a geranium it’s a pelargonium or a cultivar of one of its hybrids.

But one thing is certain of all types of geranium: they can all get sick, either from care issues or exposure to bacteria or fungal spores.

Of the 45 known geranium diseases, several only attack a specific species, hybrid, or cultivar while others can attack all geraniums.

Here’s a shortlist of the most common geranium diseases, how to spot them, and how to deal with them.

As mentioned, there are approximately 45 known diseases, but many fit into smaller categories.

These are the most common types of disease and what causes them.

This disease often comes from infected soil or exposure to an infected plant and cannot be cured.

Blackleg and pythium root rot may occur individually or simultaneously, as they’re caused by the same pathogens. However, there are also other forms of root rot, which may be a fungus or bacterial in nature.

There are many different kinds of blight that can affect geraniums, notably: bacterial blight (Xanthomonas campestris pv. Pelargonii) and botrytis blight (Botrytis cinerea).

This disease is a disorder caused by overwatering and poor ventilation and air circulation.

Another disease with multiple causes, the most common ones to affect geraniums are alternaria leaf spot (Alternaria alternata) and pseudomonas leaf spot (Pseudomonas cichorii).

This nasty disease only affects pelargoniums.

The third big category, you will most likely encounter either southern bacterial wilt (Ralstonia solanacearum) or verticillium wilt (Verticillium albo-atrum and Verticillium dahliae)

What Damage Do These Diseases Cause?

With so many diseases, it can be surprisingly easy to identify them.

Verticillium wilt will cause the middle and u[pper leaves to wilt and fall off, with the veins turning brown during infection.

Bacterial blight has somewhat similar symptoms but affects the lower leaves, which develop tiny sunken spots on the undersides prior to wilting.

Southern bacterial wilt is also similar to verticillium wilt but affects the lower leaves, turning them yellow as they wilt.

Geranium Rust only affects zonal geraniums and creates rust colored pustules on the undersides of leaves, which translate to yellowish spots on top of the leaves.

Leaf spot appears due to getting the leaves wet or overwatering and forms water spots on the plants, with alternaria affecting the undersides in concentric rings and pseudomonas creating irregularly-shaped spots.

Edema is also caused by overwatering and creates water blisters on the undersides of lower leaves which will turn brown and may result in leaf drop.

Pythium also attacks overwatered plants and will cause roots to become waterlogged with transparent tips and the outer tissue pulling away from the core.

When it affects cuttings as blackleg, Pythium will turn the base brownish black and rapidly move up the cutting, killing it.

Bacterial fasciation is a curious disease which causes short, aborted pale green to yellow stems at or below soil level while seemingly not affecting the rest of the plant.

Botrytis blight is a nasty disease which first affects flowers, and spreads as the petals fall onto leaves, resulting in irregular leaf spots.

It’s known to become resistant to fungicides after repeated exposure to the same one.

How To Control Gardenia Diseases?

There’s a certain trick to using fungicides, namely you need to switch it up often.

The more a disease such as botrytis blight is exposed to the same brand or chemical composition of fungicide, the more likely it will be to develop a resistance and, eventually, an immunity.

Thus, if you wish to go the chemical route, use a few different products in rotation so the fungi have less chance to adapt.

Fungicides can be used for prevention as well, but neem oil is the better preventative maintenance solution as it’s safe, effective, and won’t create a resistance.

However, in a pinch, having a good fungicide on-hand can stop an infection dead in its tracks before it can spread to your other plants.

The one method nobody wants to use is often the only solution. Plants infected with bacterial blight, bacterial fasciation, southern bacterial wilt, and verticillium wilt must be destroyed and you shouldn’t reuse the infected soil.

Soil sterilization is expensive but an option when dealing with an infected area in your garden.

Additionally, you will need to destroy any cuttings that have been infected with blackleg or rust.

A lot of people don’t like neem oil because it can take longer to destroy bug infestations, but there’s a lot to love about this natural insecticide.

For example, did you know that it can actually help plants fight off some bacterial and fungal infections, including root rot?

During an infection or infestation, it can be applied every other day for 14 days or until the problem is gone.

It dissipates in only 45 minutes to an hour, so it’s safe on geraniums that are sensitive to having wet leaves.

Use every two weeks as a preventative.

Meanwhile, neem soil soaks are absorbed by the plant and fight both root rot and many infections that have broken through the surface of the plant.

It boosts the plant’s immune system for up to 22 days, so apply every 2 to 3 weeks as a treatment or preventative.

Neem can also help with controlling Aphids, caterpillars, cutworms, and other insect pests.

The most common cause of fungal infections is overwatering, which is easily avoided by using the soak-and-dry method on your geraniums.

Botrytis blight can also be staved off by deadheading your geraniums so potentially infected petals never touch healthy leaves.

Always dispose of your debris safely, both deadheaded blooms and cuttings not being used to propagate, and always keep your tools sterile between cuts, washing your hands thoroughly after handling each plant so you don’t become a vector.

Finally, always do some homework prior to ordering soil or plants from a grower.

Make sure that soil (including potting mixes) are properly sterilized, a vital step many cheaper brands skip.

And when purchasing seeds, saplings, or other geranium plants, be sure the grower has a reputation for frequently testing its stock and try for culture-indexed plants when possible.