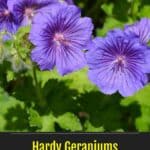 When searching for information on geraniums, it’s very easy to get confused.

This is because the genus Geranium (jer-AY-nee-um) was split into two in 1789, but the new genus Pelargonium is still commonly referred to as geranium to this day.

Even more confusing is the fact that most garden species, varieties, and cultivars of geranium are actually pelargoniums despite there being twice as many species of true geranium.

Most commonly referred to as hardy geraniums due to their higher cold tolerance over pelargoniums, members of the Geranium genus can be found in temperate regions all over the world, with the largest concentration being around the Eastern Mediterranean area.

The namesake of the Geraniaceae family, hardy geraniums are also called perennial geraniums, as most pelargoniums are raised as annuals.

Some additional common names include the:

Incidentally, the nickname cranesbill is actually more closely associated with these plants than just the seed pod shape of a few species.

The name itself is derived from the Greek word “γέρανος”, which literally means “crane”.

With 422 species, as well as several hybrids and cultivars, hardy geranium plants can be quite varied in shape and size. In general, they are low-maintenance plants.

As a general rule, they can range from a tiny 4” inches to 3’ feet tall and have a spread of roughly the same size.

Plants tend to clump or spread, depending on the species, with popular species often being wide-spreading but low-growing groundcovers.

The foliage varies in shape and size and is generally a medium to dark green color.

While there are exceptions to the rule, true geraniums tend to have disk-shaped flowers with five equally-sized petals.

The flowers can be solid, patterned, or have prominent veins and come in a range of colors, such as blue, magenta, pink, purple, red, and white.

Sitting above the plant, they tend to attract birds, bees, and butterflies.

The exact species or cultivar will determine the flower size and bloom time, with some blooming only once, some blooming in sporadic waves, and a few, such as the cultivar ‘Rozanne’, blooming nonstop throughout the summer.

Geraniums are sun-loving plants and need a good 6 to 8 hours of full sun for the best possible blooms, and should get no less than 4 hours per day.

That said, morning or evening exposure with afternoon part shade works well, and some species and cultivars will need more light than others.

There’s also some variation in where these plants can grow outdoors.

Humidity isn’t a big issue, although too much can lead to fungal infections.

However, depending on the species or cultivar, these plants may grow anywhere from USDA hardiness zone 3 to 9 and up.

While these temperatures are cooler than what pelargoniums need, the matter of how cold hardy a true geranium is depended heavily on the individual species or cultivar.

Avoid sudden temperature drops, as this can cause the plant to start shedding leaves.

Hardy geraniums can be drought tolerant once established, but they don’t like to be too wet or dry.

The soak-and-dry method works best, regardless of whether the plant is in a container or the ground.

Simply stick your finger in the soil and if it’s dry 1” inch down, it’s time to water.

Always use tepid water to avoid temperature shock and water the soil directly, as the plant can develop fungal infections if the leaves get too wet.

While pelargoniums like to eat, hardy geraniums are surprisingly light eaters.

An annual application of compost in the spring is usually enough to keep your geranium happy, although potted plants may need a light, balanced liquid fertilizer applied according to the package instructions.

True geraniums will survive in almost any soil as long as it’s well-draining.

However, they ideally prefer loamy soil with coarse sand or perlite added for drainage.

Organic material is important, as hardy geraniums need an acidic soil pH between 5.8 and 6.3.

Container plants will need repotting every 2 or 3 years, and all members of the genus will need to be divided at least once every 3 to 5 years to maintain heavy blooms and have a longer lifespan.

Very little maintenance is needed once established, although pruning away dead leaves or regular deadheading can improve health and appearance.

Likewise, many growers prefer to shear their geraniums back to the basal growth after blooming to encourage fuller growth.

How To Propagate Wild Geranium?

By far the easiest way to propagate hardy geraniums is through division, as the plants need to be divided anyway to maintain health.

Stem cuttings and seeds may also be used, although using seeds from a cultivar can be a gamble on what you’ll end up with.

Hardy geraniums take after their name, being both cold hardy and drought tolerant once established.

They can be infested by all of the usual suspects, but are rarely seriously affected by them.

However, Japanese beetles are known to attack the cultivars of Geranium oxonianum and rabbits will go after Geranium phaeum and its cultivars.

Few diseases affect the genus, although root rot is a threat and the plants are prone to fungal infections like powdery mildew if the leaves get too wet or as a side effect of infestations.

One of the many distinctions between the genera Geranium and Pelargonium is the matter of toxicity.

While the latter can be toxic to both humans and pets, true geraniums are non-toxic.

They work great in containers, along borders, or as ground cover.

Hardy geraniums can be grown in coastal regions and in much colder zones than many other popular flowering plants.

Both the foliage and flowers are attractive and invite beneficial insects such as pollinators to your garden.