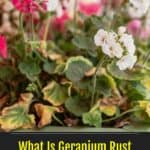 The many types of Geraniums are some of the most resilient flowering plants out there if you care for them properly. However, there are times when they can still get sick.

One of the most dreaded diseases your geranium can get is known as either geranium rust or pelargonium rust.

The reason for it having two names is because geraniums are actually two different genera of plants.

But while there are over 400 species of true geranium, you most likely have one of the 280 mostly annual species (and numerous cultivars) of the genus Pelargonium (pe-lar-GO-nee-um).

The topic of geranium rust can get a little complicated because it’s actually four different rust diseases, but thankfully most US growers will be dealing with only one type of rust.

What Is Geranium Rust?

There are four different types of rust that affect geranium plants, caused by different fungi.

Of these, you will most likely encounter pelargonium rust (fungus Puccinia pelargonii-zonalis) which, as the name implies, affects only the zonal geraniums (Pelargonium × hortorum and its cultivars).

Puccinia morrisonii and Puccinia geranii-pilosa are both native to Australia and no reports have been noted of either occurring in the US.

As the name suggests, geranium rust tends to look like little patches of orange or brown rust spots forming on the leaves of the affected plant.

What Damage Does Geranium Rust Cause?

Geranium rust isn’t simply an eyesore, it can be deadly.

In the case of pelargonium rust, the first symptoms are small yellow spots on the undersides of leaves.

As the fungus spreads by spores, raised brown pustules will form in the middle of these spots and yellow spots will begin to show on the tops of the leaves where the pustules are forming.

If left untreated, the leaves will die and fall off, defoliating the plant.

But even early on, this disease can interfere with photosynthesis, leaving the plant more susceptible to other diseases or infestation.

Uromyces geranii is very similar, but the pustules may be larger and can also spread to the leaf stems.

Note that rust can look very similar to edema, but the two have very different causes and consequences.

How To Control Geranium Rust?

It’s important to immediately prune away infected foliage using sterile shears, being careful not to let those leaves surface come in contact with healthy parts of the plant.

Put the infected Geranium leaves in a sealable, airtight bag and dispose of it safely.

Chemical control fungicides are one of the most common forms of defense against geranium rusts, and there are a lot of options out there, such as Daconil and Spectro.

You will need to prune and treat the infected leaves and plant weekly until the disease is gone completely.

Organic growers may find success using a neem foliar spray or neem soil soak, as neem oil has been known to combat and kill fungal infections and can be used regularly as a preventative.

Of course, prevention is the most effective weapon against rust, and there are many things you can do in your daily routine to help prevent this disease from getting a foothold.

Humidity a major problem is greenhouses and water is a major vector for these fungi, so avoid splashing your geraniums and always try to water the soil directly.

Likewise, use caution in bringing a geranium indoors, and try to quarantine it for a while before introducing it to other plants.

You should only purchase plants from reputable growers who are known to fully inspect plants prior to shipping and practice safe handling of plants.

Always sterilize your tools, including between cuts, using isopropyl alcohol or rubbing alcohol, and be sure to wash your hands after handling the plant.

Reputable companies such as Miracle-Gro are known for their safety standards, but “Brand X” may be a gamble if you don’t do some research beforehand.