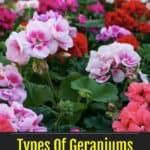 There are a lot of plants out there that have been reclassified botanically but are so popular they tend to become the representative of an entire genus that they no longer belong to.

One of the best examples of this is geraniums.

There are currently 422 accepted species of geranium, but most of the geraniums you know are actually former members that now belong to the genus Pelargonium.

With only 280 species to its name, pelargoniums actually hold the lion’s share of cultivars and hybrids.

However, it could be argued that since these general are both parts of the family Geraniaceae, they are all technically geraniums anyway.

The most notable difference between the two genera tends to be the flower, which contain distinctly different reproductive structures.

True geraniums also tend to be somewhat more cold-hardy due to the higher altitudes many come from.

Between the two genera (and including a few species now belonging to the genus Erodium), most geranium plants hail from tropical regions around the world, with a large percentage in the Eastern Mediterranean region.

All but 30 pelargoniums hail from southern Africa and Australia.

The name geranium is based on the Greek term “γέρανος,” which means “crane.”

This name refers to the seed pods of some true geranium species, whose flowers give way to a central seed stalk with five pods that resemble the beaks of a crane.

While not present in many species, this association has led to true geraniums often being referred to by the nickname cranesbill.

Depending on whether you have a geranium or Pelargonium, these plants have a wide range of growth habits and uses.

Some are vining types perfect for groundcover, while others are almost exclusively houseplants.

Some species are annuals, while others are perennials.

Some prefer USDA hardiness zones 10 to 12, while others are far more cold-hardy and actually stop blooming if it gets too hot.

You can use geraniums in a wide range of garden themes, such as Mediterranean or rock gardens, while others are used for border planting, and some are perfect for window boxes or entryways.

Geraniums are most commonly broken down into between 4 and 6 types (either omitting hardy cranesbills or separating zonal geraniums), with various species, varieties, and cultivars falling under these types.

The following are the 5 main types, how they differ, and some examples of plants in those types.

This group of cultivars is what you’ll find in most garden centers, although they are all actually hybrids of Pelargonium inquinans and Pelargonium zonale.

They’re best known for the way the flowers emerge in globe-shaped groups and the aromatic leaves.

Being descended from two South African species has left the common garden geranium quite versatile, with mild cold hardiness that allows them to be grown as perennials in warmer climates and annuals in cooler ones.

Note that the term “zonal” refers to the central or zonal patterns on the foliage, and these patterned pelargoniums are sometimes distinguished as being their own separate group from the rest of the common garden geraniums.

Some common cultivars in this category include:

These are the true geraniums and are cold hardy perennials that can withstand temperatures down to a chilly 20° degrees Fahrenheit.

They have five petals of roughly equal size and shape that tend to open flat.

Cranesbills may not be variegated or as brightly colored as pelargoniums, but they make up for this with a shorter height of approximately 24″ inches and the ability to be pruned heavily (down to only a few inches tall!) and still bounce back the next spring.

Oddly enough, the category of hardy geranium is often omitted from lists despite being the only group to actually include geraniums.

However, the term and category are a staple of many professional horticultural lists where the distinction between genera is needed.

Some popular examples of hardy geraniums include:

Hailing from the eastern Alps and Balkan region, this pink-flowered species is widely used in traditional medicine and forms well-behaved mats.

As a result, it’s an excellent border plant that can also serve as an effective barrier against weeds.

The leaves tend to become aromatic when crushed.

Some common cultivars include:

Popular for its preference for poor soils and grasslands, this Eurasian species has a wide natural habitat and has spawned numerous cultivars.

It has lavender, magenta, pink, or purple blooms and is both deer and rabbit resistant.

It’s also parent to several cultivars, such as:

A native of the Altai mountains, this cold-hardy species has pale violet flowers that fade towards the middle and a clumping growth habit.

The species is parent to several popular cultivars, including:

Ivy Geraniums are the type of pelargonium that has a trailing habit, making them popular in window boxes and hanging baskets.

The leaves are round to heart-shaped with five lobes, while the flowers appear in groups of 2 to 10 and have two upper petals, often bearing purple markings and three lower petals.

Between the edible leaves and numerous hybrids are collectively known as ivy-leaved pelargoniums.

Most cultivars of ivy-leaved geranium are categorized into series or groups, such as the self-cleaning ‘Blizzard’ series and vibrant ‘Great Balls of Fire’ series.

They grow in compact bushes with single-head flowers ranging in shades of pink, purple, and white.

Having the largest blooms of any pelargonium, regal pelargoniums that have been crossed with Pelargonium crispum are often referred to as angel pelargoniums.

Some cultivars have variegated blooms and foliage, while others are solid colors.

An odd quirk of these evergreen plants is that they often will stop blooming if it gets too warm, almost as if going dormant.

A few common cultivars include:

As the name implies, the scented leaf Geranium group contains pretty much any pelargonium species or cultivar that has aromatic foliage and often overlaps with other groups.

In some instances, the scent may be ever-present, but in most cases, the scent is only released if the foliage is bruised or damaged.

In many cases, the leaves are used to make potpourri or even in cooking.

Plants in this group often have common names based upon their scent, such as: