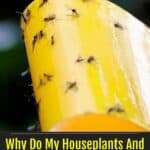 We talk a lot about fungus gnats when discussing plant pests, but they tend to get much less attention than other common pests.

Considering how often these tiny terrors infest indoor plants, it’s important to understand what they are, what they do, and how to eliminate them and keep them away.

It’s also essential to understand why these pests exist’ as it’s the key to protecting your plants against them.

What Are Fungus Gnats?

Fungus gnats are closely related to fruit flies and other gnats (i.e., tiny flies known to gather into clouds).

In nature, they help spread mushroom spores and even pollinate some plants, while a few species are predatory.

Despite being a plant pest, adult fungus gnats are harmless to healthy plants and primarily a nuisance.

Most fungus gnat species are poor fliers, so you’re more likely to see them skittering around on the soil or plants than in the air.

While some plants will repel fungus gnats, most common houseplants are susceptible to infestation.

Even though they’re common, they’re also poorly researched, and we know especially little about the dark-winged fungus gnats (family Sciaridae), which are believed to consist of as many as 20,000 species, but only 1,700 have been classified.

The exact details vary significantly between species, but fungus gnat adults generally lay around 200 eggs in moist or wet soil.

Once hatched, 90% percent of the larvae are female, which is why fungus gnat populations explode quickly.

Fungus gnat larvae typically aid in decomposing organic matter, but the species that tend to infest houseplants are known to bore into plants above and below soil level, resulting in extensive damage.

Sciarid species are especially notorious for this type of damage, boring into mushroom crops and feeding on the roots of infested plants.

However, once the larvae become adult gnats, they’re no longer destructive.

Adult fungus gnats only survive for a couple of days, long enough to mate and lay an additional cluster of fungus gnat eggs.

As the name implies, fungus gnats are attracted by fungal growth.

When you overwater your plants or leave them in high humidity, they can develop fungal infections or rot.

The gnats are attracted by this smell of rot, which signals that something is decomposing, and fungal growth on the soil surface is especially attractive.

Dealing with mold, fungus, or rot is bad enough, but the added stress caused by the gnat larvae can kill an already sick plant.

It’s easy to spot the presence of fungus gnats, and while an infestation might seem overwhelming, there are several ways to fight the problem.

Remember that you’ll still need to address the initial rot or infection when using these methods.

Fungus gnats tend to be poor fliers, so take advantage of this by setting up a fan trap.

This will require you to place sticky traps on the wall behind your plant (ensure the plant can tolerate wind) and put a fan in front at a little distance.

Turn the fan on, and the gnats will be blown straight into the sticky traps where they’ll die.

Hydrogen peroxide can be added to distilled water to make it more like natural rainwater, providing some benefits to your plants.

Mix 1 part hydrogen peroxide with 4 parts water and use that when it’s time to water the plant.

Repeat approximately once per week (again, do this when it’s time to water) until the infestation has been eliminated.

Several insects will hunt fungus gnats and their larvae, including ladybugs and parasitic wasps.

Of course, you probably don’t want even more bugs in the house, so the beneficial nematode species Steinernema feltiae is a great alternative.

The microscopic nematodes burrow into gnat larvae, release bacteria that kills them, and then use the corpse to feed their young.

Neem oil is an all-natural insecticide that can be used in multiple ways (even the solids left over from the extracting process are sold as fertilizer cakes).

However, neem soil soaks are especially effective against fungus gnats.

Create an emulsion of 1 teaspoon Dawn dish liquid or pure castile soap in a quart (or gallon) of water.

Add 1 tablespoon of 100% percent pure cold-pressed neem oil per quart or 2 tablespoons per gallon to the solution.

Test a tiny part of the plant 24 hours before treating it to ensure it isn’t sensitive.

Simply pour 2 to 4 cups of the soil soak onto the soil in place of watering.

The Azadirachtin will kill any pests in the soil and becomes a systemic insecticide once absorbed by the plant’s roots, further protecting against piercing or chewing insects for up to 22 days.

Even better, neem oil can fight off some forms of root rot and fungi.

Reapply every 21 days until the infestation is gone or continue using it as a preventative.

Take a soda bottle and cut the top off, then tape the top back inverted to create a funnel.

Pour some apple cider vinegar into the trap and place it near the infested plant.

The gnats will be attracted to the smell and fly in but can’t get back out.

Proper watering is the key to preventing a fungus gnat infestation.

Use the soak and dry method or the bottom-up method to avoid overwatering.

Also, always use a well-draining potting medium, amending with perlite or coarse sand, if needed.

Containers should have drainage holes, and isolating any infested plants is best to reduce the risk of cross-contamination.

If you have a fungal infection or rot, treat it immediately, and repot any plants that have been accidentally overwatered, disposing of the old soil.