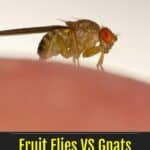 Fruit flies and gnats are not the same, but they are commonly mistaken for each other.

So the first step to fixing the problem is to determine if you are dealing with gnats, fruit flies, or something else.

There are a few key differences between fruit flies and gnats.

They are slightly different colors and shapes, with fruit flies gravitating toward produce and drains, while gnats prefer your plants and windows.

Let’s go into more details about fruit flies and gnats so you can determine which to treat your home for.

Everything To Know About Fruit Flies

Adults are about 3mm long with six legs and one pair of transparent wings. Their bodies are tan or brownish, and they have large, red eyes.

Fruit fly larvae are white, yellow, cream, or brown, with black mouth hooks. They are worm-like and tiny, measuring roughly half a millimeter in length.

What Do Fruit Flies Eat?

Fruit flies enjoy ripe or decaying organic matter. It’s what they need to eat and where they lay their eggs.

Unfortunately, you’ll often find fruit flies in the kitchen, gravitating towards fruit, vegetables, and other food left on the counter or in the trash.

Fruit Flies are most prolific in late summer and fall. This is when their food sources become the most abundant.

How Do You Get Fruit Flies?

Fruit flies enter homes through openings, such as cracks around doors and windows or tears in screens.

They can also make it indoors if you bring home produce with fruit fry larvae.

What Other Names Do Fruit Flies Go By?

Everything To Know About Fungus Gnats

Fungus gnats, or soil gnats, are also tiny, flying insects. So it’s easy to see why many people with fungus gnats think they have fruit flies.

Fungus gnat adults are either gray or black. Like fruit flies, they are also about 3mm long with six legs and one pair of translucent wings.

With their long legs, fungus gnats look quite like tiny mosquitos.

Check out this article on using cinnamon for fungus gnats control.

They grow between 2 to 8mm long before hitting the pupa stage to reemerge as adults.

What Do Fungus Gnats Eat?

Adult fungus gnats primarily feed on flower nectar. However, fungus gnat larvae will eat fungus from the soil or plant it hatched on.

The worst-case scenario for plant parents: they eat the plant’s roots.

A large, hardy plant may fare just fine when soil gnat larvae feed on its roots.

But if the plant is more vulnerable, heavy soil gnat feedings can cause damage or death to the plant.

This can come from the roots’ destruction, but lacerations from feeding can also leave the roots vulnerable to infection.

How Do You Get Fungus Gnats?

Soil gnats love damp places where fungus can thrive. The most common way to attract fungus gnats is to overwater houseplants.

When you bring a new houseplant home, they are often already in the soil.

Fungus gnats thrive outdoors; they are just less noticeable than when a population is building up in your home!

What Other Names Do Fungus Gnats Go By?

Fruit Flies vs. Gnats: The Differences

So, which do you have in your home? Both are quite common. Let’s examine the difference between fruit flies and soil gnats.

How To Treat And Prevent Fruit Flies?

Here are various tips you can do at home to treat and prevent fruit flies:

How To Treat and Prevent Fungus Gnats?

Here are various tips you can do at home to treat and prevent fruit flies: