Spring rose care does not start in the spring. Growing roses, are an all-season crop – the most continuous one in flowerdom.

It is perhaps for this reason many “beginning rose growers”, when it comes to early spring chores, assume their roses can wait if other jobs are pressing. 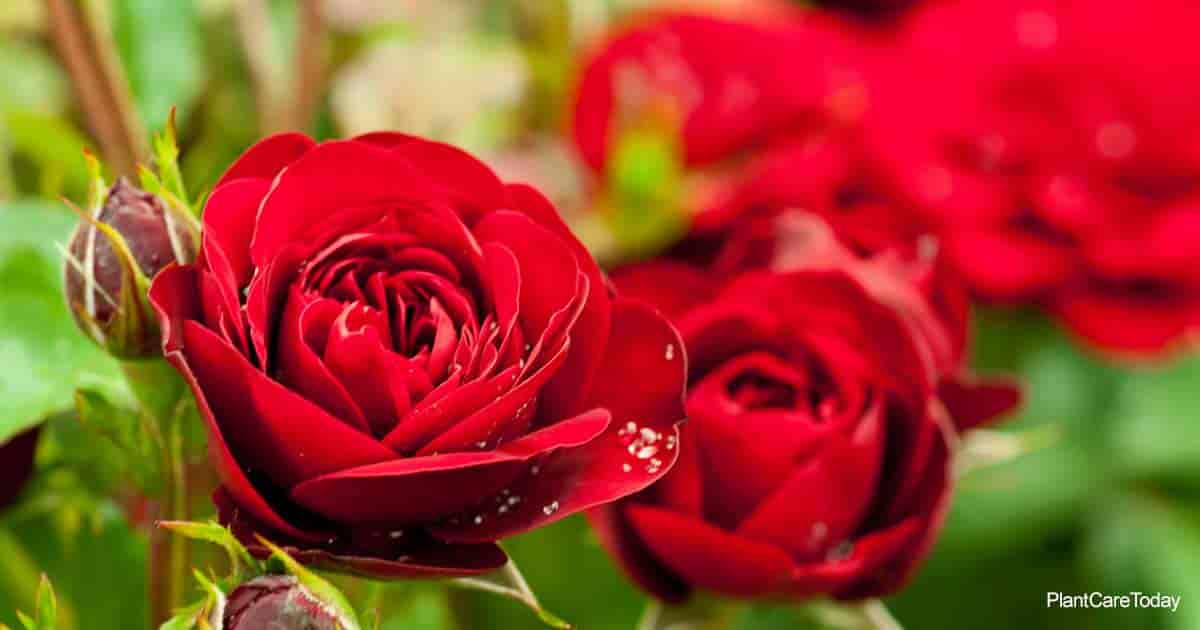 Consequently, the early attention roses should receive, often gets put off from weekend to weekend.

If you want to grow excellent roses, they must have first call in getting the care as they require.

The rose grower who assumes the queen of flowers will be content to sit on the sidelines waiting until it is convenient for them to minister to her needs will find her a discontented and sulky mistress.

Let’s face it, if we want first quality blooms in abundance – and throughout the season – make roses the number one task.

With the melting of winter snows and gradually rising temperatures, the rose lover’s first concern is to look over their rose plants and estimate the amount of winter injury there has been.

Some of it they can tell at a glance:

The first order of the day, however, is to get the rose bushes back into condition. Every break, bruise or cane which is dying back, means potential future trouble.

Pruning the roses, then, is the first step.

In the rose books of former days this was treated as a sort of sacred rite, performed only by a European-trained gardener, with imported “secateurs”. For hand pruners we like Felco #2’s.

Check out our article on – Pruning Knock Out Roses

As a matter of fact, rose pruning is not too complicated and can be successfully done by the beginner. Your work will be simplified by learning at the outset that there are two distinct kinds of pruning to be done.

This type of pruning is of particular concern to the grower who wants the largest and most perfect flowers possible, and especially if they intend to exhibit.

Overall, I’ve found it advisable to make the first pruning just as soon as the leaf-buds begin to swell. Pay no attention to the second type of pruning until you go over the beds a second time, two to four weeks later.

In the first pruning, all broken and winter-injured wood is removed. Also any old surplus canes from bushes overcrowding as well as spreading branches showing an inclination to get tangled up with their neighbors.

In the second pruning, made after foliage growth has started sufficiently to indicate vigorous live wood, we remove any winter-injured shoots formerly overlooked .

Also cut back healthy live wood in accordance with the type of plant we wish to develop in each case.

In general, the more severe the pruning the larger and more perfect the blooms will be.

But the number of blooms will be fewer. This applies particularly to teas and hybrid teas and to the larger flowered floribundas (grandifloras).

Pruning is designated as light, moderate and heavy.

In light (or high on the bush) pruning, the canes are merely trimmed back about one-third and weak, twiggy side growths removed.

(In northern sections old man winter is likely to do most of this job for you, leaving the dead wood to be removed in the early spring pruning.)

In moderate pruning, canes are cut back to four to eight buds on each main stem.

In hard pruning to half that number.

The amount of pruning for each plant will depend upon general climatic conditions, vigor of growth and upon the variety, so it is not possible to make hard and fast rules.

Pruning cuts, especially in hard pruning, are best made above a bud pointing out, so the new branches will tend to make a spreading, open plant. However, this cannot always be done.

What is of great importance is that each cut be made just above the bud (1/4″ inch or less), and with a sharp knife or shears that will leave a clean, smooth surface that will callus quickly.

Floribundas require little pruning except to remove the oldest canes and maintain fairly open plants. Shrubs and most old-fashioned roses need even less.

Climber Roses – except for the rambler type, which should be pruned after flowering – need little pruning except to remove some of the oldest canes back to or near the base to prevent overcrowding.

It is important with many, however, to train strong new canes at an angle, or horizontally, in order to get a profusion of flowering side shoots instead of just a few at the top.

Between the early spring pruning and the second one, rake over the beds to remove all debris of trimmings, fallen leaves and other litter. This is piled up and destroyed.

If soil or compost has been hilled up around the plants, as it should be in the north, this is then carefully removed so as not to injure the stems, and the hilling material worked into the soil of the beds.

We then give the roses their first spring spraying.

This first spray should cover not only the plants but the surface of the soil as well.

If leaf growth has not started, one of the dormant oil sprays or liquid lime-sulphur may be used for this, otherwise the all-purpose rose spray.

Learn about –> Getting Rid of Aphids on Roses

The objective is to have both plants and soil surface (where numerous pests, and especially black spot spores, winter over) as clean as possible.

A few days after this spraying we give the spring feeding – the heaviest of the year. Roses are hungry plants and to produce their best must be kept supplied with food.

Our spring application consists of a general-purpose rose fertilizer (5-10-5) plus two to three pounds of superphosphate per hundred square feet (or about 1 pound to five or six plants).

Do not put fertilizer in a ring around the plants. Spread it evenly over the entire surface and then work in lightly with a small-bladed hoe.

If any fertilizer has adhered to leaves, remove it with spray from the hose.

We used to delay applying mulch on roses until late spring or early summer. Now we put it on immediately after the first feeding. A good mulch cuts down the problem of weeding by 75 to 90 percent.

Mulch conserves moisture, keeps the soil cooler in hot weather and prevents hard packing of the soil surface – a very important point in clay soils. By all means, mulch your roses – and do it early.

With us the second pruning follows the feeding and mulching. Clippings are gathered and destroyed.

Spraying or dusting is repeated at intervals of a week to ten days, regardless of whether any insects or diseases appear. This is imperative if you want to be sure of good blooms.

If this is to be your first year with roses, or if you are adding new plants to your garden, start early.

Every week’s delay after the soil can be dug lessens your chances of success.

If planting must be delayed until late April or May, buy growing plants in pots instead of dormant ones. These may be transplanted even when in bloom.

To grow teas, hybrid teas and floribundas successfully you must have a location with good drainage, plenty of sunshine, and free air circulation.

The soil is of minor importance because almost any soil can be built into a good rose soil.

In preparing the soil, dig deep – a minimum of 18″ inches and preferably 24″ inches.

If the soil is very poor, excavate the bed and fill in to at least half its depth or even two-thirds, with good topsoil mixed with one-third, by bulk, of compost, rotted manure or peatmoss.

Work bonemeal into this (4 to 5 pounds per 100 square feet), or superphosphate at the same rate.

If dormant plants are used, prune back the tops (if not already done by the nursery) to 10″ or 15″ inches. Cut broken or injured roots back to firm wood and trim back over-long roots.

While planting, keep roots plunged in water or covered with wet peatmoss or wet newspaper.

Place enough soil in each planting hole (which should be large enough to take roots without crowding) so that the “knuckle” or swelling at the base of the stem will be just at or slightly below the surface after soil is filled in.

Spread roots out in natural position, pack soil around them and then fill hole with water and let this soak away before filling in the rest of soil.

Hill up soil around canes and leave this in place until growth starts, then level it down.