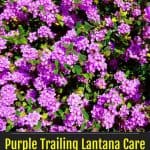 Lantana montevidensis [lan-TAN-a, mon-tay-vid-EN-sis] is a low-growing shrub spreading up to 10′ feet across and only reaches about 18″ inches tall.

This cascading Lantana is commonly called purple trailing lantana due to the trailing growth and clusters of purple flowers.

The plant is native to various subtropical regions of South America and is often grown in California to protect against soil erosion on dry hillsides.

The flowering shrub belongs to the Lantana genus, which includes about 150 species.

Purple trailing lantana creeps low across the ground, reaching about 12″ to 20″ inches tall.

The lower branches are woody, while the upper growth is more vine-like.

A single root system can spread 5′ feet or more, making it a popular choice for ground cover.

The dark green leaves are coarsely-toothed and hairy.

When crushed, the leaves may cause skin irritation and release an unpleasant aroma.

The plant is best suited for outdoor growth in USDA hardiness zones 8 to 10.

It can survive outdoors in warm regions, but frost and freezing temperatures will kill the plant quickly.

In regions experiencing temperatures close to freezing, cover the top of the soil with mulch before winter.

After the plant becomes established, it needs watering only occasionally.

Never allow the soil to dry out completely.

Groom lantana to manage its growth.

Without pruning Lantana, it may spread and overtake other plants.

Trim the plant in the spring before the temperatures get too warm.

Trim it back to control growth and remove wilted foliage.

As lantana grows quickly, it’s possible to trim it back to about a foot from the ground.

Light trimming throughout the year may also encourage new growth and fuller blooms.

How To Propagate Trailing Lantana Montevidensis?

The plant reseeds at the end of the growing season.

Collect the seeds and sow them at the start of spring.

To propagate by division, dig up the soil around the plant and remove the root ball with a shovel.

Find the base of the stems and separate it into two or three sections.

Plant each section in well-drained soil and keep moist until the plants settle.

Take cuttings in the spring.

Whiteflies may infest the plant, but infestations are rare.

If whiteflies appear, spray the plant with neem oil or insecticidal soap.

Along with pests and diseases, pay attention to the invasiveness and toxicity of the plant.

More on the question of is the: Lantana Plant Poisonous?

Purple trailing lantana grows quickly and has become invasive in some parts of the world.

It’s not recommended for growth in Hawaii or Australia.

In other regions, it should be grown with care to avoid uncontrolled spread.

Ingesting the plant may cause discomfort, especially when eating the berries.

Dogs and small animals may experience more severe effects, including damage to the liver and gallbladder.

Livestock should not be allowed near the plant as the toxicity may lead to permanent damage to major organs.

The flowering Lantana montevidensis shrub is a low-maintenance option for ground cover in frost-free regions.