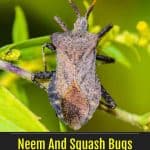 Squash bugs (Anasa tristis) are a highly destructive pest that feeds on members of the Cucurbitaceae family, such as cucumbers, watermelons, zucchini, and squash plants.

These pests change slightly during their life cycle but are easy to spot. The red squash bug eggs are laid on the undersides of leaves in egg clusters containing 20 to 40 individual eggs each.

The eggs hatch into nymphs measuring about ½” inch long, with whitish-grey bodies that go through a total of five instar stages.

Adult squash bugs reach ⅝” inches long and have greyish-brown bodies somewhat similar to a stink bug but with an orange underside.

Squash bugs are sap drinkers, piercing the surface of your squash plant and draining its fluids, which can cause cucurbit leaves to dry and fall off, as well as attacking the fruit itself.

When threatened, they emit an unpleasant odor similar to that of stink bugs, making it even more frustrating to deal with an infestation.

Thankfully, there are effective, natural ways to deal with these pests, even in an organic garden.

Neem oil is one of the most effective all-natural, non-toxic remedies out there, along with diatomaceous earth (DE for short).

It can not only kill squash bugs but many other cucurbit threats as well.

Neem oil is derived from the seeds of  Azadirachta indica and contains five active chemicals.

The most important of these, Azadirachtin, has a chemical composition similar to the hormones of many insect species.

When ingested, Azadirachtin will cause squash bug nymphs to lose their appetite and can stunt or stall progression through the growth stages.

Learn more about How Neem Oil Works On Plant Pests

In adult squash bugs, it has the added effect of causing infertility.

100% percent cold-pressed raw neem oil is the direct result of crushing the seeds, with neem cakes being a useful byproduct. When the Azadirachtinis extracted from raw neem oil to use in other pesticides, the result is clarified hydrophobic neem oil.

The clarified oil comes in concentrations of .5 to 3% percent and serves as a topical pesticide, clogging the airways of insects and causing them to suffocate.

When applying the natural pesticide neem oil, you need to add it to emulsified water, which is just a teaspoon of safe or natural soap such as pure Castile or Dawn dish liquid soap blended into each gallon of water.

This soapy water has the surface tension broken, making it possible for the neem oil to be mixed in.

One of the primary tactics against plant piercing bugs is a neem soil soak.

Mix two tablespoons of raw neem oil per gallon of water and pour 2 to 4 cups of the mixture over the roots of the affected plant.

More on How To Apply Neem Oil To Soil

As the roots soak up the mixture, the Azadirachtin mingles into the plant’s sap, turning it into a systemic insecticide.

This method won’t affect the eggs, but it can last up to 22 days and won’t harm predatory insects such as parasitic wasps or lady beetles, which will be free to help eliminate the infestation.

Reapply every three weeks until the infestation is gone or monthly as a preventative.

However, they can help reduce a squash bug infestation quickly by suffocating nymphs and adults, reducing the overall squash bug population.

To make the foliar spray, add four teaspoons of clarified neem oil per gallon of emulsified water and pour into a spray bottle.

Coat the entire plant, making sure to get the underside of cucurbit leaves as you go and ensuring a good amount gets onto any squash bugs you encounter.

The spray dissipates after 45 minutes to an hour without leaving any residue, so it won’t harm beneficial insects or pollinators if sprayed around dusk or dawn.

You will need to reapply the foliar spray every two days for two weeks or until the infestation is gone.

Afterward, you may choose to do a preventative spray every 14 days up until the day before harvest.

A Note on Squash Bug Eggs

The eggs are the one part of the squash bug life cycle that is resistant to neem.

Extra soapy water can make the neem oil stick longer, killing the nymphs as they hatch, but this can also harm beneficial insects.

To treat the eggs, you may choose to simply wipe them off of the leaves, or you can leave them for natural predators, knowing the nymphs will be vulnerable to neem once they’ve hatched.

Can You Also Use Neem Oil for Squash Vine Borer Infestations?

As with squash bugs, the squash borer (Melittia satyriniformis) in its larval form is highly destructive to a cucurbit plant.

Vine borer larvae burrow into the vine, feasting on the innards while blocking the flow of nutrients.

Neem soil soaks have some degree of effectiveness but is most potent when the larva is in the process of burrowing into the hollow vine.

The adult moth is attracted to the color yellow, laying up to 150 eggs on the host plant, but thankfully doesn’t directly harm the plant itself.

Note that neem oil can also treat powdery mildew, which sometimes appears on plants that have been attacked by sap-drinking insects.