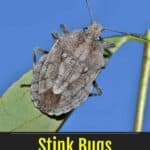 They sneak into your home when you least expect it, hanging around on your walls and ceiling, waiting for your cat to eat one. If threatened, they can release the acrid smell that earned them their name.

Yes, it’s the dreaded stink bug. While relatively harmless on their own, stink bugs are best known for being a nuisance.

But did you know groups of stink bugs can become harmful to plants?

Stink bug larvae and adults feed on the sap of various plants and attack fruits or vegetables.

The wound on a leaf may appear as a yellow or brown circle with a tiny pinprick in the middle.

They also inject chemicals into the plant to make feeding easier.

Worst of all, they can pass yeast spot disease to your plants.

A single female can lay hundreds of eggs in a single season. This makes it possible for a population explosion under the right conditions.

Natural predators can help wipe out these pests. But it’s best to have a reliable, natural method to destroy the stink bugs without harming any beneficial insects.

So now, the big question is:

Yet, it is effective in stink bug control and can end it over time.

Check out all the bugs Neem Oil kills.

The Benefits Of Neem Oil

One of the best remedies for organic gardening is neem oil.

Extracted from Azadirachta indica, raw neem oil is a natural substance containing five insecticidal substances. Azadirachtin is the primary one.

Azadirachtin has a chemical composition like that of many insects. The ingestion of Azadirachtin can trick the insect into feeling that it’s no longer hungry.

It can also delay or interrupt progression through growth stages or cause infertility.

When extracting Azadirachtin from the raw neem oil, the resulting clarified hydrophobic neem oil takes on different properties that make it best as a topical treatment.

Clarified neem retains a small amount of Azadirachtin (generally between .5% and 3% percent). It can clog the airways of soft-bodied insects, causing them to suffocate.

Clarified neem dissipates in only 45 minutes to one hour, posing minimal risk to beneficial insects if applied between dusk and dawn. This is unlike raw neem oil, generally used as a systemic insecticide.

Add a teaspoon of Dawn dish soap or pure castile soap per gallon of water and dissolve.

The soapy water has less surface tension, allowing the oil to blend.

Mix in 2 tablespoons of 100% percent cold-pressed neem oil. Pour 2 to 4 cups of this mixture over infested plants’ roots.

The plant absorbs the Azadirachtin, becoming a systemic insecticide. It will only affect pests that break the plant’s outer layers.

Both stink bug nymphs and adults drink plant sap, making them vulnerable to this form of neem.

Ingesting the Azadirachtin will cause some stink bugs to starve, while others will be unable to reach the next growth stage or produce eggs.

A significant advantage to using soil soaks is treating larger plants, such as trees and shrubs.

The Azadirachtin remains for up to 22 days. Repeat treatments every three weeks to stay effective.

Best of all, it won’t harm beneficial insects or pollinators such as bees because these visitors won’t break the plant’s skin.

More on the question – Is Neem Oil Safe for Bees?

You will need to add four teaspoons of clarified neem oil per gallon of emulsified water, then pour the mixture into a spray bottle.

As mentioned before, foliar treatments are best at dusk or dawn.

Spray the plant leaves, stems, and any crevasses of the infested plant, being sure to cover every surface.

Repeat the treatment every other day for two weeks or until the stink bugs are gone. Some

The foliar treatment isn’t effective against adults, but it can suffocate nymphs, reducing the number of adults over time.

If used in combination with a neem soil soak, the treatments will bear results faster.