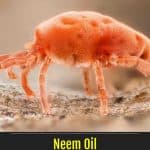 Spider mites are an unusual pest, with bodies resembling ticks, but the ability to create messy webbing that resembles that of spiders.

This family of arachnids tends to infest indoor plants more than outdoor plants, where they’re easily preyed upon by natural predatory insects, birds, and other hunters.

Due to their tiny size, you might not even notice their pepper-like appearance until messy webs begin appearing between the leaves and stems of the infested plant.

Spider mite infestations tend to hide on the undersides of leaves, making them harder to spot.

These plant pests pierce your plant and drink the sap, becoming especially problematic in hot or dry weather.

The webbing is used for both protection and as highways to get from one part of the plant to another.

Spider mites can also spread on wind currents to other plants.

But the worst part is that it only takes 5 days for a spider mite to develop from egg to fertile adult, with three molting stages in between.

Neem oil is one of the few completely natural remedies that can kill spider mites, but improper application can reduce or negate any effectiveness.

The following methods are geared primarily towards indoor plant but may be adapted for outdoor use as well.

How To Use and Mix Neem Oil To Kill Spider Mites

As mentioned, neem oil must be mixed and applied properly to achieve the best results.

Because spider mites breed fast, isolating an infected plant along with any neighbors, using a combination of methods is generally the best solution.

Neem soil drenches or soaks are incredibly effective against spider mites, as it uses 100% percent cold-pressed raw neem oil, which has the highest concentration of Azadirachtin.

The soak is absorbed into the plant, turning the Azadirachtin into a systemic insecticide.

Azadirachtin is a natural chemical found in the neem plant (Azadirachta indica) that closely resembles the hormones in insects that regulate growth and reproduction.

When a spider mite nymph ingests Azadirachtin, it may lose interest in feeding, and its ability to reach the next growth stage can be hindered or even halted.

Meanwhile, an adult may become unable to lay eggs or become infertile.

Neem soil soaks won’t directly kill most of the spider mites, but will instead prevent them from aging or reproducing and cause the infestation to die out without harming beneficial insects or pollinators.

How to Make and Use Neem Soil Soaks

It’s easy to make your own soil soak, and it only requires three ingredients, two of which you already have at home.

Learn more about Mixing Neem Oil for the garden and plants.

Once applied, a single dose will last for up to 22 days, and can be reapplied every three weeks to fight off active infestations or monthly as a preventative.

Neem foliar sprays use clarified hydrophobic neem oil, which is created when Azadirachtin has been extracted from raw neem oil.

This version still has several active components, but has a very different effect and is used as a contact poison.

Instead of stunting an insect’s growth, clarified neem oil gets into the bug’s airways, causing it to suffocate.

Clarified neem oil is available in .5 to 3% percent potency levels, allowing you to choose the strength that works best for your needs.

Because the foliar spray is topical, it shouldn’t be used outdoors during times of day when beneficial insects are active.

However, it may be used indoors at any time of day and will evaporate without any residue after 45 minutes to an hour.

How to Make and Use a Neem Foliar Spray

As with the soil soak, you only need three ingredients.

Begin with emulsifying water the same way as you would with a soil soak, then add four teaspoons of clarified neem oil.

Using a spray bottle, coat the entire plant, getting every crevasse and making sure to get the underside of every leaf.

Any nymph or adult spider mites that are coated will soon die, although it won’t kill the eggs.

You will need to do a fresh application every 2 days for 14 days or until the infestation is gone. Afterwards, you can apply the foliar spray every 2 to 3 weeks as a preventative measure.