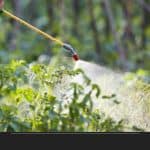 This naturally extracted oil contains a wide range of substances that can combat insects, fungus, bacteria and even improve your plant’s health.

Neem products, such as neem foliar sprays and neem soil soaks, can be purchased pre-mixed from garden centers and online stores.

Unfortunately, you have no control over the amounts, ingredients, or freshness of these mixes.

There’s a bright side to this dark cloud of uncertainty, as you can buy neem oil on its own and mix your own natural insecticide.

There are a few important things you must consider when planning your neem oil mixture, however.

How To Mix Neem Oil

Mixing your neem oil insecticide can be daunting the first time you do it.

Thankfully, the process is quite simple once you know the basics.

Always Use an Emulsion

The most important rule of mixing any neem oil product is to use an emulsion.

An emulsion is simply water that has its surface tension broken, allowing it to mix with oil.

Chances are if you try to make a neem insecticide and it separates, you forgot to use emulsified water.

All you need is water and some liquid soap.

Pure castile soap, Dawn dish liquid, and insecticidal soap are the three most popular choices for an emulsifier.

Add ⅓ teaspoon per quart or 1 teaspoon per gallon of your chosen emulsifier and stir gently to blend it into the water.

The reason oil and water won’t usually mix is due to the latter’s surface tension.

But emulsifying first, you can blend the oil into the water without it separating.

Be Mindful of Temperature

Neem oil loses potency when exposed to heat, so avoid mixing it by the window or a heat source.

It would be best if you also kept the unused neem in a cool, dry place.

The completed neem mixture can be refrigerated, but will only have a shelf life of a few days to a week, so only mix what you need.

When buying raw neem oil, make sure it is labeled as “cold-pressed” to ensure no heat was applied during the extraction process.

Azadirachtin is one of several active ingredients found naturally in neem oil and is often removed from the neem for use in other products.

Add 2 tablespoons of raw neem per gallon of emulsified water.

Soil soaks help against root rot and ground pests and becomes a systemic insecticide when absorbed by the plant.

When raw neem is processed to remove the Azadirachtin, the resulting product is called clarified hydrophobic neem oil.

This version of neem still contains a tiny amount of Azadirachtin and is commonly sold in concentrations of .5 to 3% percent Azadirachtin content.

Clarified neem is best used for foliar oil sprays and as a neem leaf shine, as it dissipates quickly.

Mix 1 teaspoon of clarified neem per quart of emulsified water (or 1 tablespoon per gallon).

When mixing at home, you can add several additional ingredients to increase specific effects.

Aloe powder is popular for many crops.

Another common addition is one or more essential oils, such as eucalyptus or peppermint.

Just be warned that extra ingredients may cause some trace amounts of neem oil to remain on the plant, increasing the risk of harming beneficial insects and pollinators.

NOTE: Neem oil sprays are used to fight fungal diseases such as powdery mildew and harmful pests like Japanese beetles.