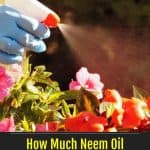 One of the most important natural pesticides out there is neem oil.

Extracted from Azadirachta indica, a tree native to India that can now be found cultivated in countries all over the world, neem oil is the source of the powerful insecticidal chemical Azadirachtin.

Neem is an active ingredient in many healthcare products due to its composition, which includes omega fatty acids, minerals, and other beneficial substances.

When applied to plants, it serves primarily as an insecticide but can also function as a pesticidal repellent, fungicide, and even kill many harmful forms of bacteria.

Using natural neem oil pesticide is easy once you know the basics, but people often get confused by the wide range of recipes out there, especially when the ratio of ingredients can differ greatly.

How Much Neem Oil Per Gallon Of Water

Of all the sticking points, the amount of neem that should be added per gallon of emulsified water is a major concern.

Too much neem can cause chemical burns to a plant, and the amount needed varies on the type of application you’re going for.

Here’s what you need to know for the three most popular applications of neem products.

Foliar sprays are perhaps the most common application of neem oil.

These sprays usually use clarified hydrophobic neem oil with a low Azadirachtin concentration of .5 or 1% percent.

As a general rule, you will use between 1 to 2 tablespoons (½ to 1 ounce or 3-6 teaspoons) per gallon of water.

For young plants, you will want to use the smaller amount, as their dermal layer is still very tender and easily burned.

Older plants will accept any amount in this range, although you should check to find out if your plant has any sensitivities to neem before using a larger amount.

They can be a little complicated because you’re working with multiple gallons at a time.

As a general rule you will be mixing 4 gallons of neem spray at a time using 1% percent clarified hydrophobic neem oil.

For a four-gallon mix, you will need 6.5 ounces (13 tablespoons) of the neem oil

This also equates to just over ¾ cup of neem.

Soil soaks or Neem drenches are an incredibly potent tool in plant health, as the Azadirachtin is absorbed into the plant and serves as a systemic insecticide for up to three weeks at a time.

A good soil soak needs to be far more concentrated, as it’s literally poured onto the soil.

Be warned that these soaks use 10% percent cold-pressed raw neem oil, which can cause chemical burns to your plant if applied directly, but work wonders when allowed to be soaked up by the plant’s roots.

The average soil soak will contain 2 tablespoons (1 ounce or 6 teaspoons) of neem oil per gallon of water, which will be further diluted as it’s absorbed into the soil.