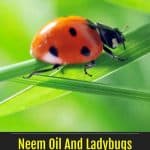 There are 450 species of ladybug in North America, most of which are highly beneficial as natural predators. These cute little insects devour massive quantities of plant pests, such as aphids and mealybugs.

The bodies of ladybugs are usually red, orange, or yellow with black spots, but some species come with different patterns or no markings at all, and their shells can be black, blue, or other colors.

For the most part, seeing a ladybug in your garden is considered a good thing, and even their peculiar black larvae are masters of pest control.

Unfortunately, some varieties have been introduced to the US only to prove harmful.

Some beetles, such as the Mexican bean beetle and Japanese beetle, can also harm plants, devouring fruit or even eating the roots.

Additionally, harlequin ladybugs are known to bite, causing allergic reactions in many humans and various side effects in dogs.

As a general rule, you want ladybugs in your garden, but it’s important to know whether natural remedies such as neem oil will harm or kill ladybugs, and how you can regulate your usage to match the kind of ladybug you have.

When it comes into direct contact with a ladybug, an organic solution of neem oil can be deadly, and when ingested, it can harm or kill off a population.

Thankfully, there are ways to apply neem oil insecticide that will be more harmful to unwanted species, while providing less risk to the beneficial ones.

The Effects of Neem Oil on Ladybugs

Neem oil tends to have different effects, depending on whether it’s clarified or raw.

When ingested, the Azadirachtin can cause a ladybug larva to stop eating and may prevent it from developing to the pupal stage.

In adults, it can reduce fertility or stop egg production completely.

When the Azadirachtin is removed from neem oil for use in other pesticides, the resulting clarified hydrophobic neem oil becomes less effective as a poison and more effective as a contact killer.

When a ladybug or other insect gets coated in clarified neem oil, the substance gets into their airways and causes them to suffocate.

Because these two forms of neem oil are applied differently, you can pick the application method which has the desired effect on your garden’s ladybug population.

You can purchase it either the oil itself or in a premade commercial spray, such as Bonide Ready to Use Neem Oil Spray.

To make your own spray, emulsify a gallon of water by adding 1 teaspoon of Dawn dish soap or pure castile soap and gently blending it in.

Next, add four teaspoons of the clarified neem oil, using the potency you prefer, and put this into your spray bottle.

Apply thoroughly, getting every nook and cranny of a pest infested plant, including the underside of leaves.

The oil will go to work immediately and dissipate from the surface of your plant in 45 minutes to an hour without leaving any residue behind.

Repeat the treatment every other day for 14 days or until the infestation is completely gone.

Using this spray at dusk or dawn will create minimal risk of harming pollinators of beneficial insects such as adult ladybugs while killing harmful pests.

The downside to using this foliar spray is the fact that ladybugs deposit their eggs on leaves, and the larval and pupal stages are left vulnerable to the effects of the neem oil.

This means you’ll end up reducing the number of future adults while leaving any existing adults unharmed and able to lay more eggs in future.

As a result, you may wish to avoid performing preventative applications every 14 days, as this will be counterproductive if you wish to increase a ladybug population.

When purchasing the oil, make sure you buy only 100% percent cold-pressed raw neem oil, as the presence of heat during the extraction process can reduce the neem oil’s effectiveness.

Dyna-Gro Pure Cold-Pressed Neem Oil is a good brand to use.

For the soak, you will want to add 2 tablespoons of raw neem oil per gallon of water.

Pour this mixture over the roots of an infected plant, using 2 to 4 cups for small or average sized plants and more as needed for larger ones such as shrubs and trees.

The plant’s roots will soak up the Azadirachtin, which then becomes a systemic insecticide that poisons piercing and leaf-damaging insects without harming insects that simply land on the plant.

A single application can protect a plant up to 22 days and may be reapplied monthly as a preventative.

The good news is that neem soaks will kill the pest varieties of ladybug that snack on food crops or other treated plants without those plants becoming toxic to humans.

Thus, you can safely eat a squash that is toxic to squash beetles, although it’s generally preferred to treat the plant prior to harvest over doing so right before.

Because the Azadirachtin is in the plant itself, it’s mostly harmless to beneficial ladybugs, although research has shown that approximately 20% percent of the Azadirachtin remains in the body of a bug who’s ingested it, so your ladybug population may still get a little in their bodies when feeding on aphids or other plant pests.

The effects are thankfully minimal, and there’s no evidence to suggest this secondhand ingestion is significantly detrimental to the ladybug, unlike with ants who harvest large quantities of aphid honeydew laced with Azadirachtin in an undigested state.