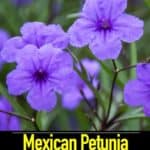 As the name suggests, this plant is a native to Mexico.

However, it is also found abundantly in the Caribbean and South America.

Over the years, the plant has been known with multiple names including Ruellia angustifolia (Nees) Lindau, and Cryphiacanthus angustifolius Nees among others.

Today, the most widely accepted names for this species include Ruellia brittoniana and Ruellia simplex.

However, most people prefer to call it Mexican petunia.

But it is not a petunia.

Two other varieties with variegation are Ruellia Makoyana and Ruellia portellae.

It’s an evergreen perennial known for its flowers and being deer resistant.

These plants typically form colonies of stalks with lance-shaped leaves.

While the foliage is attractive, it’s the Petunia flower that steal the show for this plant.

Other plants from the family Acanthaceae:

This is a low shrub having a dark purple cast and dark green leaves.

These plants have a fast growth rate quickly reaching 3′ -6′ feet tall, and the same in diameter.

Keep in mind that while a baby purple showers may not be full, the plant becomes lush with age and from clumping colonies.

Owing to its fast-growing nature, it is considered to be invasive.

NOTE: Although it is listed as an invasive species, we’ve grown them for years in the state of Florida landscape and never experienced the plants getting out of hand.

The leaves of this plant can elongate up to 12” inches. However, when grown in dry conditions, the leaves usually remain short.

The petunia ruellia is a flowering plant with lovely petunia flowers usually violet in color.

Each of the petunia-like flowers lasts about one day but the flowering season is considerably long, lasting from early summer and fall.

Moreover, the flower grow in abundance.

Neither the blooms nor the plant itself has a distinctive fragrance. Nonetheless, it does manage to attract bees, butterflies and even hummingbirds to the garden.

Purple showers love full sun, but grow well in partial shade. The more sunlight they receive, the more flower they produce. These plants enjoy summer warmth and even survive a drought.

They don’t do well in the cold. As temperatures start to drop, it is best to move Mexican petunias out of the way of the cold and chilly winter breeze.

The best approach is for watering just enough to keep the soil consistently moist.

While these plants are sturdy and can go without water for a long time, young petunia ruellia simplex needs regular watering.

During the colder months of the year, refrain from overwatering and only wet when the soil is visibly dry.

These plants grow well without an additional boost of fertilizers. If you still want to feed your plants, a tablespoon of 10-10-10 fertilizer is enough.

Scatter the fertilizer around the plant during the flowering season.

Once established, these plants thrive and flourish in almost any type of soil.

For optimal growing conditions, use a well-draining fertile soil. Also, consider the pH level of the soil.

These plants tolerate alkalinity but usually do great in neutral or slightly acidic soil.

Transplant during early spring when the temperature is warm enough to allow the plant to settle and grow.

Under the right conditions, these plants are pretty self-sufficient and do not require much additional care.

Since they are invasive, it is best to keep an eye on the growth.

If you feel that these purple flowers are taking over your garden, pull out some of the stems.

This plant is often unruly.

Make sure to prune regularly to keep plants in shape and maintain an appealing appearance. Also, don’t forget to clip the burned or damaged leaves.

Dwarf Ruellia ‘Katie’ has beautiful blooms along with easy care and why Texas A&M University named it a Texas Superstar .

How to Propagate Petunia

This plant can self-seed aggressively.

During the rainy season or when hosed with water, the seeds can be ejected to up to 10-feet away.

It propagates well on its own through seeds. These plants also propagate through cuttings.

If you simply can’t have enough of the lovely violet flowers, cut the stem halfway down once the flowering season ends.

The plant will replace the lost stem by growing multiple stems and flowers!

Mexican petunia usually does not encounter any serious problems. However, cold weather can damage the plant, turning the leaves brown.

The only way to avoid this from happening is to protect the plant from cold. If the temperature is low enough to cause frosting, move the plant indoors (if possible) to a warmer spot.

Although it is not common for this plant to get infected, Mexican petunia flower is susceptible to spider mites.

Spray a good-quality insecticide or a soap solution on the foliage to get rid of spider mites. Keep the problem under control by pruning the infected leaves, flowers, and stems.

Mexican petunia is a beautiful plant bearing lovely flowers growing in full sun or partial shade. However, this spreading perennial is invasive and banned in some states.

In fact, R. brittoniana spreads by rhizomes and is self-seeding it has become naturalized in South Carolina, Texas, and Hawaii. [source]

If you are worried about Mexican petunia taking over your yard, it is a good idea to get an infertile plant, which is unable to self-seed, from a nursery.

This is a plant that attracts butterflies, make good border plants or ground cover, and adds winter interest when growing in south Florida.