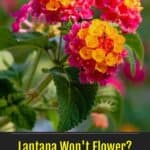 The Verbenaceae family has a wide range of flowering plants that are home and garden staples in landscaping. Beyond the namesake verbenas, there are also genera such as Lantana (lan-TAN-a) which provide amazing displays of color and scents.

In fact, the lantana shrub (often called shrub verdanas due to their shrublike growth habit) has approximately 150 species, plus countless varieties and cultivars that attract butterflies.

Unfortunately, whether grown as perennials or annuals, there’s nothing more frustrating than when your lantana does not produce clusters of flowers and fails to bloom.

The good news is that this problem is often easy to solve once you know what’s wrong.

Why Does My Lantana Plant Not Bloom?

Plants need to spend a lot of energy to produce flowers, and too much or too little of a good thing can often cause them to put their energies elsewhere.

Here are some of the most common causes of blooming failures and what you can do about them to enjoy their pink, orange, yellow and lavender flowers.

Sometimes your plant does bloom but is drastically underperforming.

This is because it’s still expending energy to feed spent flowers or berries.

By deadheading (pruning away spent flowers), your plant will be better able to redistribute its resources into making new flowers, resulting in a more bountiful display.

There’s a large family of around 2,000 insect pests you don’t hear a lot about called Tingidae.

Commonly referred to as lace bugs due to the lacy appearance of the adults’ wings, they’re piercing insects, much like aphids, scale, and mealybugs.

If you’ve even had blood drawn, you’d know how lethargic you feel afterward, which is exactly what happens when bugs are sucking the sap from your plants.

A neem soil soaks every 2 to 3 weeks can help keep lace bugs and other pests from gaining a leghold and kill any that try to pierce the plant’s foliage.

NOTE: Whiteflies, spider mites, sooty mold, and powdery mildew can also be a problem with Lantanas.

Have you ever heard the phrase “too much of a good thing”?

A long time back, an active 120-year-old farmer must’ve thought of this when the king’s diet killed him.

Like that farmer, your plants can live a very long, healthy life by that farmer’s adage of “early bed, early rise, and meat and potatoes”.

Lantanas are a good example of plants that actually suffer when pampered.

They can get lethargic and have trouble producing new blooms.

Check your feeding and watering habits, as well as the environmental conditions to ensure you’re not overdoing with too much fertilizer and adjust as necessary.

In the event the soil proves too rich from overfeeding after performing a soil test, either flush it out or completely replace it with fresh, unfertilized soil.

People often talk about how wonderful photosynthesis must be, but it’s actually a pretty inefficient method of feeding.

Plants have several different types of chloroplast, each designed to activate during different lighting conditions, much like a pair of treated glasses.

Unfortunately, too much shade can mean even chloroplasts designed for low light can fail to produce sufficient energy, especially when it’s time to produce flowers.

Make sure your lantana is getting at least 6 to 8 hours of bright, direct sunlight every day for particularly harsh regions (and at least 4 hours of full sun everywhere else) so it can gather the necessary energy to bloom.

One of the main effects of obesity is that it takes more energy for the body to do the same things as a body that isn’t obese due to the extra mass being moved.

This is also true of plants, which can get too big if not maintained.

Early in the growing season, you can encourage the plant to bloom by pruning Lantana. Prune away ⅓ of its mass.

Follow this crash diet up with a meal of fertilizer and good quality water so the plant can recover from the procedure.

Having been slimmed down, your lantana will have a lot more energy for producing those trademark blooms.

The single worst cause of blooming issues is root rot.

This disease can be fungal or bacterial and happens when the plant is overwatered and often results in yellow leaves or leaf drops.

Root rot is very serious and can easily kill your lantana, so the sooner it’s diagnosed, the better.

If you’re growing your lantana as a perennial, you may need to let the soil conditions completely dry out before watering next, or even perform an emergency transplant.

If transplanting, be sure to carefully prune away any diseased roots with sharp, sterile shears and put the plant somewhere it can recover undisturbed.

As recovery from root rot can take a while, your lantana may not bloom until next year, but it’s better than having to discard the whole plant, which may be the case for annuals.

Ask any pregnant woman if she’s trying to get pregnant and she’ll likely give you a very odd look.

The same could be said for your lantanas if there are seed pods present.

These are little green pods that form when a flower has been fertilized.

This isn’t usually a problem for lantanas being grown as an annual, but a potted perennial will occasionally need to be repotted.

This leads to a temporary condition known as transplant shock where your lantana is stressed and needs to get used to its new surroundings, much like your cat or dog when you move or take them on vacation.

During this time, your plant won’t be thinking about flowers, so the earlier in spring you do any repotting or root maintenance, the more likely you’ll get blooms on time.