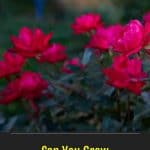 One of the biggest draws to the Knock-Out Rose isn’t its lush growth or beautiful blooms.

It’s the fact that they are far easier to maintain than ordinary roses and are more disease resistant (black spot and powdery mildew) and pest resistant. More Knock Out Rose Diseases.

However, this doesn’t mean you can grow a Knockout Rose anywhere and expect it to thrive.

Knockouts still have some basic guidelines for watering, transplanting, pruning, and feeding.

One of the most important considerations when planting any ornamental is the amount of light it will need.

There’s a lot of confusion when it comes to Knockout Roses because what it can handle isn’t necessarily what makes it thrive.

Can You Grow Knockout Roses In Shade?

The answer to this question actually depends greatly on the cultivar you’re growing.

As a general rule, you should avoid full shade and give your shrub roses full sun when possible.

The absolute best place to plant any Knockout Rose is a spot that catches the full morning sun, gaining shade from the hottest hours of the extreme heat afternoon sun.

A good rule of thumb is to aim for 6 to 8 hours of full sun per day.

In cooler climates where the sun is less intense, this period should be increased to 8 to 12 hours when possible.

For more southern climates prone to drought and scorching heat, it’s best to pick a spot where the planet will get dappled sunlight for most of the day and direct sunlight, mostly in the early morning or late afternoon.

Knockout Roses that do Best in Full Sun

While all Knockouts can handle a bit of partial shade or dappled sunlight, they don’t all react the same way to it.

The majority of Knock-Out Rose varieties should be given full sun for at least six hours of the day.

Placing these varieties in partial shade or dappled sunlight will result in fewer blooms and thinner foliage.

Knockouts are extremely heat-tolerant, so it’s usually better to give them a little too much sun over a bit too little.

Knockout Roses that Do Well in Partial Shade

Several varieties of Knockout actually enjoy a bit of partial shade without losing their intensity.

These include ‘Radcor’ and ‘Radrazz’. When planting either of these, you can aim for dappled sunlight or partial shade, and they’ll produce just as many blooms as they would in full sun.

Note that you may have to provide a little extra care in colder climates to ensure they’re still getting enough sun.

As with most plants, your Knockout Rose is pretty good at telling you when it’s getting too much or too little of something.

In the case of sunlight, leaves may turn yellow or drop when there’s too much sun or heat as a means to cool off.

You can solve this by providing a bit of extra shade or adding something to dapple the light.

Conversely, the foliage may become thinner when there’s not enough sun.

Too much shade will result in the leaves turning extra dark as they attempt to capture more light.

Some may also turn yellow as the plant attempts to consolidate its energy. They are making it appear to be getting ready for winter.

When this happens, the best thing to do is try to increase its light exposure, either by removing sources of shade or transplanting the bush to a brighter part of your garden.