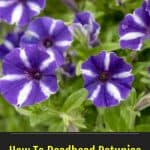 The process of pruning or pinching the flowers is called deadheading.

Petunia is a genus of flowering plants with over 20 species of which most are annuals.

They bloom in the summer, producing vibrant flowers for several months.

Many of the cultivated varieties are hybrids with new varieties appearing regularly.

Some of the newer hybrids don’t require deadheading to prolong the bloom.

Check the Petunia care instructions on the seed packet or flower marker.

If the petunia requires deadheading, it may not bloom profusely without occasional pinching or shearing.

When to Deadhead Petunias

Start deadheading petunias when the first blooms show signs of dying. and the flowers appear wilted.

As petunias tend to bloom at the start of summer, the plant may be ready for deadheading several weeks into the season.

After the initial bloom, the flowers start to brown and fall off. The plant then starts producing a seed pod.

The goal is to deadhead the spent blooms before the plant starts producing seed pods.

Without deadheading, the plant may only produce a single bloom.

The petunia spends the rest of the season with straggly stems and no flowers.

Clipping off the wilted bloom and the emerging seed pod forces the plant to restart the process, producing a new bloom.

Deadheading is typically performed about once per week throughout the summer.

When cooler temperatures arrive in the fall, the plant should stop producing flowers.

How to Deadhead Petunias with Pinching

Several methods exist for deadheading petunias, including pinching and pruning.

How to Deadhead Petunias with Pruning

After one or two seasons of pinching, try pruning.

Pruning includes many of the same steps used for pinching.

Instead of fingers, this process requires sharp, clean gardening shears or scissors. Felco #2 hand pruners are our favorite.

Pin
Click to Learn More | Buy from Amazon
Why We Like Felco Pruners
If you click this link and make a purchase, we earn a commission at no additional cost to you.

Popular varieties benefiting from deadheading include Grandiflora and Floribunda.

Grandiflora is the largest variety of petunias with flowers reaching up to 4″ inches wide.

These plants are vigorous growers but need deadheading throughout the summer to encourage new growth.

Some of the newer hybrids are low-maintenance plants requiring no deadheading.

Surfinia is a Grandiflora hybrid not requiring frequent deadheading but may still benefit from one pruning session in the middle of summer.

The flowers eventually wilt, dry up, and fall from the plant.

New blooms appear without the need for deadheading.

While some varieties don’t need deadheading, the stems may need pruning to prevent leggy growth.

Cut the stems back to about half their length in the middle of the summer to promote fuller foliage and blooms.