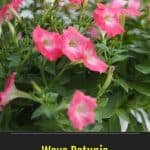 The Wave Petunia is a hybrid from the Solanacaea family that includes a wide range of valuable and cherished members, from essential food crops to trees and shrubs. Among those members, more treasured for their ornamental use are the hybrid plants called petunias.

Petunia x hybrida (Pet-tew-nee-uh hib-rid-uh), or wave petunia, is an especially attractive variety of multiflora petunias. While petunia plants, in general, originated from South America, many of the newer hybrids were developed in France and Germany during the 1850s.

Interestingly, all petunias are derived from only two plant species, Petunia nyctaginaflora and Petunia violacea and are thus all considered hybrids.

Wave petunias challenged the others when it debuted in 1995 with its hardy spreading growth habit and ability to attract a wide range of pollinators.

… and over 55 cultivars (including the stunning Wave Blue.

As with all petunias, the Wave series of plants is technically a perennial, yet will act like an annual when grown outside of their normal hardiness zones.

The pale to deep green foliage has a hairy surface which can feel sticky to the touch, but which complements the blooms nicely.

Care Of The Wave Petunia

If you love petunias and you want variety, it doesn’t come much better than the wave petunia.

Depending upon the growth type you choose, these plants may reach a height between 6″ and 8” inches tall for the most compact varieties up to 12″ to 18” inches for the mounding types.

When grown as bedding plants on the ground, the spread may cover up to an impressive 6’ foot diameter, with Purple Wave having the largest spread. Meanwhile, trailing types may spread a shorter 2′ to 3’ feet.

This unusual ability to choose between a range of heights and widths makes this petunia perfect for just about any application. The plants tend to grow relatively quickly, allowing you to fill a garden with flowers in your first growing season.

The attractive 1″ to 3” inch diameter petunia flower of wave petunias comes in a range of colors, with some of the newest cultivars achieving unusual coloration such as electric blue or even black.

Unlike other varieties, the single and double flowers grow profusely throughout the flowering season (anywhere from early spring to late fall) and thus don’t require pruning or deadheading (AKA plucking dead flowers to encourage new blooms).

The aromatic fragrance of wave petunias typifies that of all petunias, which not only have the ability to attract a host of species but also have religious significance in both modern and native cultures.

As with all petunias, wave petunias prefer a location in full sun or bright direct light. The only exception is in arid settings, where more indirect bright lighting is preferred.

They can tolerate partial shade to an extent but should have at least six hours of sunlight per day. Lack of proper sun will result in laggy or yellowed foliage and eventual death.

As a perennial, wave petunias fare best in USDA hardiness zones 9 to 11. However, they may be grown slightly outside of this range as an annual. Under no circumstance should you expose the plant to high winds, and be sure to keep the soil moist in hotter climates.

You’ll want to keep your wave petunias well-watered, but ensure they have adequate drainage to avoid rot. The hotter the environment, the more watering they’ll need. If the soil’s dry to the touch, it’s probably time to water them.

A good weekly depth to water down to is 6″ to 8” inches. Container plants, especially those in clay pots (which heat up easily) will need watering more often than those planted in a garden and may require watering as much as twice per day on especially hot days.

Wave petunias should have a slow-release fertilizer added before the flowering season. Adding a liquid fertilizer sprayed monthly from late spring to mid-autumn will help keep single flower varieties healthy, while double-flowered varieties will need to be fed twice as often.

Signs of malnutrition include yellowing of the stems and foliage, as well as faded blooms. You can always add a little extra water-soluble liquid fertilizer when in doubt.

Wave petunias enjoy a sandy soil mix with slightly acidic levels ranging from 6.0 to 7.0 pH. The soil needs to be well-drained. Adding an organic mulch such as wood pulp or mixing some peat moss into the soil will help protect and nurture your plant.

When growing as a container plant, check and transplant to larger containers as needed to avoid the root systems from becoming pot bound. When planting maintain the same plant depth as the original pot.

A soilless potting mix works best for containers. Try adding three seedlings to a 10” inch pot or basket. For window boxes, space the seedlings 10” inches apart. Fertilizing the potting soil with 1 teaspoon of all-purpose granular fertilizer is best at this time.

Wave petunias will need tilled ground down to about 6″ to 8” inches and spacing of 12 to 24” inches, depending on whether you choose a mounding or spreading variety. Groupings of three or more tend to be preferred.

You can shape plants by cutting them back by half when they get spindly. Pinching the main stem when it reaches 6” inches tall will encourage fuller growth. Pinching will also increase durability. If a plant becomes pot bound, you can massage the roots loose or gently cut off the bottom half of the root cluster to encourage new growth.

How To Propagate Wave Petunias

Wave Petunias may be propagated through both seeds and cuttings.

Both deer and rabbits love to snack on petunias. Insect pests include aphids on petunias, caterpillars, and thrips. You can counter these insects by attracting praying manti, garden spiders, or ladybugs.

More dangerous are the host of diseases that put this plant at risk, usually due to overwatering. These include:

As wave petunias attract pollinators, they may also pose an increased health risk for family members with bee allergies.

Trailing wave petunias love hanging baskets, window boxes, and other displays. The spreading and mounding varieties work great in flower beds, a patio planter, and a wide range of garden themes. They attract a wide range of pollinating fauna, including bees, butterflies, and moths. Hummingbirds may also be attracted.

New Age religions claim petunias won’t grow around negative energy. Native American cultures, such as the Maya, believed the scent warded off evil spirits. According to floriography (AKA the “language of flowers”), petunias can symbolize both comfort and resentment when given as a gift.