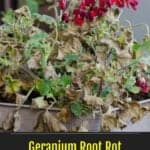 Geraniums are some of the hardiest plants you can put in your garden.

There are many types of geranium plants out there, but they all belong to two genera: 422 species commonly called hardy geraniums in the Geranium (jer-AY-nee-um) genus, and the rest belonging to the 280 species of Pelargonium (pe-lar-GO-nee-um).

Hardy geraniums (or true geraniums) are far more cold-hardy and are grown as perennials while pelargoniums are more commonly planted as annuals and need warmer climates to thrive.

Even though the two genera were separated in 1789 to showcase several differences in flower and temperament, both are still commonly referred to as geraniums and share most of their care needs.

While hardy geraniums may be more drought tolerant than pelargoniums, both can easily suffer root rot if overwatered.

If not addressed in time, this deadly disease can easily kill most plants, including geraniums. Thankfully, it can be treated if you catch it early enough.

What Is Geranium Root Rot?

There are two different causes of root rot: bacterial and fungal.

Bacterial root rot can affect almost any plant but is often seen in crop plants.

It spreads through contact or contaminated soil and deserves its own discussion as it can affect multiple parts of the plant and is rare in geraniums.

However, fungal root rot is extremely common and is usually caused by soggy soil.

It can also infect an otherwise healthy plant through cross-contamination via soil, dirty tools, or infestations.

Fungal root rot in geranium plants can also be caused by a wide range of fungi. The most notable fungi are the Phytophthora genus of water mold, also Fusarium (better known for causing fusarium wilt), Pythium, and Rhizoctonia.

What Damage Does Root Rot Cause Geraniums?

Unfortunately, the symptoms of root rot are often not visible until the disease has already spread.

The fungi eat away at your geranium’s roots, turning them brown or black and making them increasingly brittle.

The fungal growth clogs passageways in the affected roots so they can no longer absorb or transfer water and nutrients to the plant.

As a result, several symptoms may occur, such as:

Symptoms tend to occur on the lower portion of the plant and often affect only a few branches at a time as the disease spreads across the root system.

Bacterial root rot, while much less common in geraniums, will turn the affected roots to mush and may share some symptoms as well as cause cankers and other above-ground rot.

However, the symptoms can be quite varied depending on the plant and various conditions.

How To Control Root Rot On Geraniums?

First and foremost, make sure you have the right medium and water your geraniums appropriately.

This step can cut the risk of fungal root rot down to almost zero.

Never use contaminated/previously used soil, cheap brands of potting mix that don’t have a reputation for sterilizing soil, or tools that haven’t been sterilized.

When repotting, overwintering, or dividing your geraniums, always check the root structure and tubers to make sure they’re not soft, brittle and discolored.

But what happens if you find root rot? You can do the following:

In cases of bacterial root rot, there aren’t a lot of options out there for curing the plant, but removing infected tubers and sterilizing the soil will help slow the spread.

Interestingly, hydrogen peroxide has been known to aid in killing both bacterial and fungal root rot and is actually quite healthy for your plants.

This common household chemical is actually present in natural rainwater and can be used as part of a watering regimen to give your plants a healthy boost.

To specifically treat against root rot, you can follow these steps:

Do this in place of a watering session, as you’re introducing water into the soil.

Finally, pay attention to possible infestations, as some pests can be vectors for this disease, and bugs that overwinter their eggs in the soil can become carriers of bacterial root rot if they come in contact with the bacterium.