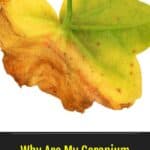 Geraniums can be a little confusing for many people, as there are actually two genera called geranium: Geranium and Pelargoniums, the latter of which was separated into its own genus but are still commonly called geraniums.

While generally having the same care, the 400+ species of hardy geraniums (referring to the actual genus) can handle much colder temperatures while the 280 species of pelargoniums like it hotter.

Chances are, your geraniums are actually pelargoniums, and knowing this difference can often help when diagnosing health problems, such as when the leaves start turning yellow.

Why Are My Geranium Leaves Turning Yellow?

There are many reasons a geranium’s leaves can turn yellow, so diagnosing can sometimes be a matter of elimination.

The following are all common causes beginning with the easiest to diagnose, as well as how to fix the problem.

Improper watering is almost always the culprit behind plant problems, and geraniums are no exception.

These plants are somewhat drought-tolerant, and it can be easy to overwater them.

Overwatering will lead to the lower leaves turning yellow, and you can also tell the plant has too much water when the soil feels soggy or wet.

Not only does overwatering cause yellow leaves, it can lead to a number of secondary issues such as root rot, infestations, or fungal infections.

But it’s also possible to underwater this plant, which can be spotted by the leaves only turning yellow along the margins.

Thankfully, both of these issues can be solved and prevented using the soak and dry method.

Simply stick your finger in the soil and water when it’s dry 1” inch down.

Note that poor soil drainage can also play a role in overwatering.

It’s usually a good practice to add a substrate of gravel beneath the planting layer in your garden, and you may also choose to add a similar layer to the bottom of containers.

It’s also a good idea to mix in a bit of aggregate to the soil, with perlite being the most popular, but coarse sand being another good option.

These prevent the soil from becoming too compact and ensure there are some tiny air pockets available, thus allowing better drainage while also making it easier for the roots to grow.

This mainly affects pelargoniums, but can also affect hardy geraniums.

Pelargoniums like warm temperatures, and using cold water or exposing the plant to sudden or prolonged cold spells can result in the leaves turning yellow.

It’s pretty easy to diagnose this problem by simply checking the weather reports.

You can help remedy the issue by making sure you water with tepid water and providing the geranium with some protection if a cold front is coming – especially one accompanied by rain.

While bug infestations don’t result in a dramatic change to yellow, they can result in yellow, brown, or black spotting as the pest feeds on the leaf’s sap, dehydrating it.

Diagnosing an infestation comes down to simply spotting them, and most of these pests hang around on the undersides of leaves.

Giving your plant a regular dose of neem soil soak every 2 to 3 weeks can not only kill an existing infestation but can also help prevent future ones.

This is a more serious issue because many fungal diseases can prove deadly if not treated.

Fungal infections are almost always caused by getting the leaves wet and/or as a side effect of a bug infestation.

Some common fungal infections that result in yellowing include:

Pelargonium rust is another fungal issue that only affects one type of geranium plant, the zonal geranium.

This disease creates yellow spotting on the tops of leaves that eventually turn brown, as well as white blisters on the undersides of the leaves.

To help prevent these infections, avoid getting the plant’s leaves wet (this is somewhat unavoidable when it rains, of course) and ensure it has good air circulation.

Higher humidity can also increase the risk of infections, so avoid artificially raising the local humidity levels around these plants.

You can combat most fungal infections by using a neem foliar spray (fungi that are on the surface) or neem soil soak (fungi that break through the surface), as well as chemical fungicides.

This can be one of the hardest things to diagnose because different nutrient deficiencies result in different symptoms like discoloration.

Adjusting the fertilizer or frequency of feeding is usually enough to fix the problem once diagnosed.

However, this will be accompanied by browned tips that eventually spread to consume the entire leaf.

A zinc deficiency will cause the leaves to turn yellow first, then fade to purple.

Meanwhile, magnesium deficiencies will show up as yellowing around the leaf margins and veins, primarily on older leaves.

A teaspoon of Epsom salts is usually the perfect cure for magnesium deficiency.

Simply solving the issue of yellowing leaves isn’t the end of your work.

The affected leaves are damaged or dying and no longer provide the plant with proper photosynthesis.

This means they’re drawing vital resources from the plant without giving back enough in return.

To ensure a healthy plant (and a good looking one), you’ll thus need to prune away any yellowed leaves.

In the case of leaves that have been infected with a fungal disease, you should dispose of them carefully so as not to spread the infection to healthy parts of the plant.