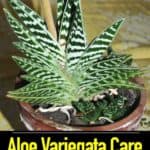 The Aloe Variegata (Gonialoe variegata) plant is one of the most distinct and well-known of the aloe plants. It is part of the subfamily Asphodelaceae, which includes a wide range of succulents.

The common names for this plant include:

A native to the Northern Cape of South Africa, along with over two hundred other Aloe plants where it grows in the rock crevices.

The variegata Tiger Aloe species has been in cultivation since around 1850. It was one of the first to be grown as a houseplant to form the start of many a succulent collection.

Read on to learn more about the care of this unique plant.

It typically reaches about 9″ inches in height, with dark green leaves growing 4″ to 6″ inches wide.

The Variegata plant grows best in USDA hardiness zones 9 to 11 and continues to grow throughout the winter. These spiky leaved aloe plants are a perfect warm season landscape plant for container gardens or a rock garden.

Some people allow the plant its thick leaves to go dormant by allowing the soil to dry out after the summer. This step isn’t required, as the plant can safely grow all year.

As tiger aloe plants do not get very big, you may need to set them on a window sill or somewhere the sunlight can reach them. They soon turn people into a succulent lover.

If you place the tiger aloe near a window, make sure the window doesn’t get too much of a draft. The breeze may harm the Partridge Breast Aloe plant.

The thick classic sword-shaped new leaves are arranged in 3 ranks grow upright from a rosette with a tiered-effect. The leaf margins have tiny blunt white teeth.

The striking dark green banding with white stippling of the partridge-breasted aloe has been described in a variety of ways.

Some say this unique cultivar resembles a statue, while others think it looks like a reptile’s tail.

The bloom time is the spring. While the flowers are attractive, the main attraction remains the distinct foliage.

The flowers grow from the tops of stems that shoot up near the center of the plant. The salmon pink flowers hang from the stem and produce a light, sweet fragrance.

To maximize growth grow the plant in any window.

As a succulent native to the south, the plant tolerates hot temperatures, especially during the summer.

For the plant to continue to flower each year, let it experience cooler temperatures during the winter.

Tips on How Much Light Does Aloe Need?

Water the Partridge-breasted Aloe regularly. Allow the soil to slightly dry between watering, and decrease the watering during the water.

Fertilizer is recommended throughout the growing season. With a succulent, use a granular fertilizer in the soil or liquid fertilizer applied when watering.

This plant doesn’t grow big and shouldn’t require repotting. As the plant has a slow growth rate, many people never need to transplant the Variegata.

However, when growing the tiger aloe from pups of offsets, younger plants may eventually outgrow their pots. Transplant in the fall, when plants start growing again.

The best soil for these small aloes is a well-drained soil for cactus or a regular potting soil with 25% extra perlite or pumice added.

The withered flower stem may need to be removed each season. Other than removing the dead flower stems, you shouldn’t need to perform any grooming.

Succulents tend to keep their leaves, and this plant doesn’t produce a lot of flowers.

To propagate your Variegata, remove the offsets that appear around the base of the parent plant using a sharp clean knife or razor. These small rosettes tend to grow when you have a healthy Partridge breast Aloe plant.

Carefully remove the smaller rosettes (vegetative babies) and plant them small pots. Use the same soil used for the main plant.

When removing the offsets, use extra caution to avoid breaking off any of the roots.

The biggest threat to the Gonialoe Variegata is over-watering. Overwatering increases the risk of fungus and root rot.

These issues are often difficult to treat. You may need to take the offsets and get rid of the main plant.

Mealybugs and other insects are also difficult to deal with. Try to remove them with a cotton swab dipped in alcohol.

As with the root rot, you may need to remove the offsets and ditch the mother plant.

This plant deserves a prominent spot where it can show off its distinctive foliage. Variegata’s small size makes it a perfect plant for growing on a windowsill.

Set it in a bright, sunny window or in a succulent garden.

What Is The Origin Of The Tiger Aloe

Answer: Variegata is one of the best known, and most distinctive of the South African Aloes. It was first found by Simon van der Stel’s Expedition to Namaqualand on October 16, 1685, at a point about 19 miles south of the Copperberg, in the Springbok district.

Called the “Partridge-breast Aloe” by Miller and Aiton, and known throughout the Union as the “Kanniedood” (cannot die), it is said that if plants of A. variegata are suspended in the air, they will flower for a year or two before giving up the ghost.

The Tiger Aloe is variable in leaf, inflorescence, shape, length, and color of flowers.
Leaves are usually green with clear white spots, the spots smaller to larger, arranged in more or less irregular transverse bands. In some localities, the leaves are of a brownish, almost chocolate color, with duller spots.

Flowers vary from 1 3/8″ – 1.3/4″ inches (35-45mm) long, from flesh-pink to dull red, and are usually paler underneath. The sterile and floral bracts are characterized by having only one prominent median nerve; this also occurs in Aloe Sladeniana.