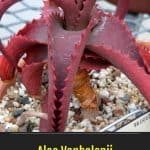 When someone mentions aloe, the first thing that comes to most peoples’ minds is aloe vera.

This is a shame since there are actually over 550 species of aloe, including the colorful Aloe vanbalenii (AL-oh van-bal-EN-ee-eye).

This perennial member of the Asphodelaceae (previously Aloeaceae) family is a native of KwaZulu-Natal and southeast Mpumalanga in South Africa, as well as parts of Swaziland.

While it’s most commonly known as van Balen’s aloe, octopus aloe, or crawling octopus in English, it has several other common African names, including:

The manner in which the plant spreads, its varied colors (depending on lighting), and bright flowers make this one aloe you’ll quickly fall in love with.

But perhaps even more important, van Balen’s aloe does its best to prove that old adage: “It takes an act of God to kill an aloe plant,” making it a perfect starter plant for kids and for adults who lack a green thumb.

This relatively short aloe can reach a maximum height of about 2’ feet and has a spread of up to 4’ feet.

While virtually stemless, it sends out numerous creepers that result in dense groups of evergreen stemless rosettes.

Its leaves are incredibly showy, ranging from bright apply green to rust red, depending on the amount of light it’s given, and displaying marginal teeth much like its more famous cousin.

When damaged, the recurved leaves release a musty cinnamon smell.

The manner in which the long leaves curl resembles tentacles has led to its nickname of “crawling octopus.”

Related: Why Is My Aloe Plant Turning Yellow?

From late winter until mid-spring, van Balen’s aloe will produce showy tubular flowers that range from red to pale greens and yellows to orange atop tall 3’ foot flower spike.

The plant typically relies on a nectar-feeding sunbird for pollination, so you may not get to enjoy its edible fruit depending on the pollinators in your area.

This fruit is dehiscent, meaning it splits vertically upon reaching maturity, spilling out the seeds.

While van Balen’s aloe can thrive in anything from full sun to partial shade, the type of light will have an impact on its coloration.

If you want bright green leaves, keep the plant in the shade.

Partial sun will give this plant green leaves with rust-red edges.

Meanwhile, the leaves will turn completely red in full sun.

Outdoors, this plant will grow in USDA hardiness zones 9b to 11 and is cold hardy down to 25° degrees Fahrenheit.

Indoors, it will thrive in most rooms without specific temperature needs.

The plant is rather heat tolerant and can easily stand temperatures of over 100° degrees Fahrenheit.

During the growing season, allow your aloe to dry 2 to 3” inches down from the surface, then give the soil a slow, even soak until water begins to seep from the drainage holes.

Avoid watering in winter, and don’t worry if you miss a watering here and there during the summer, as the plant’s drought-tolerant.

This plant can be fed with any fertilizer designed for succulents, applied according to the instructions on the package.

However, it will also still grow (albeit a bit slower) without being fed.

Related: More on How Often To Water Aloe

As with so many other aloe plants, creeping octopus prefers a rich, organic, well-draining soil but can thrive in just about anything except dense clay soil types.

Add some perlite to help increase drainage and prevent packing.

Acidic soil works best, but again, this plant can adapt to even mildly alkaline soils.

Much like its sibling aloe vera, icenalamatshe likes having room to stretch its roots and needs repotting when it becomes root-bound.

Aim to replace the soil every two years regardless.

In case you haven’t noticed yet, this is one of those rare plants that need very little attention and will still be alive and well if you go on vacation.

No pruning is necessary, although you may choose to remove badly damaged leaves or deadhead spent flowers for aesthetic purposes.

How To Propagate Octopus Aloe

There are two major ways to propagate this species: cuttings and seeds.

For cuttings, locate a node beneath a leggy leaf and make a clean cut with a sharp, sterile knife.

Allow the wound to scab over for a day or two, then dip the node in rooting hormone (aim for one that’s designed for semi-hardwood) and put it into a tray filled with a sandy mix.

Keep the cutting in a glasshouse for about a month, watering no more than twice per week to keep it damp but not wet, as root rot is a high risk for the plantlet.

Once it’s rooted, transplant the cutting to a pot filled with a good succulent or cactus potting mix.

The seed method is similarly basic.

When the seeds burst from the fruit, clean and dry them.

Germinate seeds on a damp paper towel or sow them directly onto a well-draining soil, sprinkling a thin layer of the soil on top to cover.

Avoid overcrowding the seeds and keep temperatures between 68 and 70° degrees Fahrenheit.

Keep the soil moist but not wet, and germination will usually occur in about a month.

As expected, this aloe is tough even when exposed to most garden challenges.

Some of these amazing qualities include:

While not overly cold-tolerant, it can even survive a light frost.

The only pests known to go after this species are mealybugs and other scale insects.

It’s also pretty much resilient against most diseases, with the exception of root rot.

They’re a perfect addition to rockeries and xeriscapes. Its fruits are edible. Octopus aloe also attracts honeybees and songbirds.