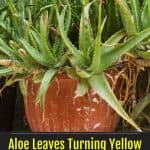 Most Aloe plant varieties, especially aloe vera, are greatly prized for a number of reasons. They are attractive, low maintenance, and have medicinal value.

But sometimes, these wonderful succulents can suffer from illness or neglect. This can result in a number of symptoms, with yellow leaves being one of the first signs of a problem.

Why Are My Aloe Leaves Turning Yellow?

Yellowing aloe leaves can be a symptom of several potential problems.

Thankfully, these are usually easy to diagnose and treat.

Ignoring yellow leaves, however, may result in more serious damage to the plant.

It’s often easy to forget that Aloe plants get sick and can contract diseases or fungal infections.

Root rot is perhaps the most common illness in houseplants and is caused by overwatering or poor drainage.

When you spot dry rot, consider a neem soil soak, as neem oil has been known to fight off many types of fungus when absorbed by a plant’s roots.

Also, try to remove affected leaves as soon as you spot them. This may not stop the issue, but it can slow the disease’s progression.

Both forms of rot can result in a yellowing of the leaves and should be diagnosed and treated quickly.

Aloe thrives best at around 77° degrees Fahrenheit but does well in temperatures down to 65° degrees.

However, it can easily fall ill when exposed to temperatures outside of a 54 to 84° degree range for more than a brief period.

To avoid this source of yellowing, try to keep your aloe away from cold drafts or overly exposed outdoor spots.

Insect and arachnid pests that drink plant sap are a very common problem and sometimes go unnoticed until they’re well-established.

It may sometimes be easier to catch these pests on an aloe plant, as they normally hide on the undersides of leaves – and aloes are known for their vertical orientation.

These pests pierce a plant with their mouthparts, drinking the sap and often leaving behind a waste called honeydew.

It’s important to isolate and treat your aloe as soon as you spot aphids, mites, whiteflies, or other pests hanging around in the foliage.

As with all things, moderation is the key when feeding your aloe.

This not only means choosing a plant food with the proper nutrients but also being careful not to feed it too often or forget to feed it.

Excess fertilizer can cause chemical burns to the plant, even when that food is all-natural.

Additionally, the soil will slowly suffer a buildup of salts and other mineral content due to plant food and possibly your choices in water.

Always feed your plant as instructed and change out the soil once every 1 to 2 years to avoid buildup.

Two sides of the same coin, your aloe plant is a succulent, meaning it’s used to storing its water in normally arid conditions.

Overwatering (excess water) is the more common issue. The soil should be allowed to partially dry out between waterings. A pot with drainage holes and well-draining soil is also recommended.

Consistently moist soil leads to root rot, which harms the plant’s ability to absorb nutrients from the soil.

As a result, it will become ill and start to turn yellow.

Check out these Tips On When and How To Water Aloes

The flip side of this coin is underwatering. An aloe plant can usually survive up to three months without water.

However, the longer it’s forced to rely on its stored water supplies, the less healthy it will become.

This can again lead to yellowing.

Direct Sunlight and Too Little Sunlight

It’s a common mistake for people to hear the word “succulent” and imagine a cactus in the desert.

Too much direct sunlight will actually cause an aloe plant to suffer burns, turning yellow, then purple, or brown on the damaged leaves.

Likewise, too little sunlight can turn aloe leaves yellow. Most plants have multiple types of chlorophyll in their leaves.

The amount of light will affect which types of chlorophyll are active and which are dormant.

In variegated plants, this becomes much more noticeable.

Yellow chloroplasts will often become active when there’s a light issue as the plant attempts to optimize its photosynthesis.

Make sure your aloe plant gets plenty of bright, indirect light to partial shade all year round.

There may be some natural yellowing as the plant becomes dormant in the fall, but that doesn’t mean it needs less light.

Occasionally rotate or shift the plant so all sides can get equal light exposure.