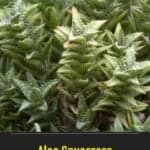 When someone mentions aloe, it’s not uncommon for the immediate image to be aloe vera.

However, there are more than 550 different species of aloe out there, some of which are common and some endangered.

One of these, Aloe squarrosa (AL-oh skwa-RO-suh), is among the latter due to its limited natural range on the island of Socotra, Yemen.

Its two siblings, Aloe perryi and Aloe jawiyon, are also at risk due to goat herding and human expansion.

The true tragedy of this succulent plant and member of the Asphodelaceae family isn’t its status. It’s that so few know of its beauty.

While this plant doesn’t do well indoors, we believe that getting to know this wonderful perennial aloe will make you want to adopt one and help keep the species alive.

Excluding the floral stalks, this slow-growing plant has a rounded form that reaches mature plant size of 12” inches by the time it’s 5 to 10 years old.

It’s a rhizomatous plant that will slowly scramble along the ground if not maintained.

Despite being evergreen, the plant is most active in spring and autumn and hibernate during winter.

The big attraction of this plant is its foliage, which is far showier than aloe vera.

As the plant grows, the lower leaves will die and fall off.

While the foliage is Yemen aloe’s main draw, the inflorescence is simple but not to be underestimated.

Depending on conditions, the plant may bloom only once in the year or intermittently, although it rarely blooms if kept in a container.

The Erect flower spikes cluster at the center of the plant, reaching up to 35” inches tall, and bear cylindrical racemes of tubular, green-tipped flowers.

The flowers themselves are tiny, measuring only about ⅕” inches across but are a glorious red to orange with buds appearing as a flushed green.

As with most aloe species, your Yemen aloe will prefer full sun under most circumstances.

However, in harsher climates, it may prefer partial shade during the summer months or full direct sunlight in morning/evening with some shelter in the early afternoon.

This plant is highly vulnerable to frost and rot, so having the proper temperatures and low humidity is essential.

It can be grown outdoors in USDA hardiness zones 9b to 11 but can be difficult to grow indoors without a terrarium or other special environmental setup.

Never expose the plant to temperatures of 40° degrees Fahrenheit or below.

In many cooler climates, A. squarrosa is grown under glass to provide better protection.

Squarrosa can have a difficult time following a strict watering schedule. It is highly susceptible to root rot. This plant takes the soak-and-dry method of watering to heart.

Allow the soil to fully dry before watering and only use distilled water or natural rainwater at room temperature.

Pour slowly and evenly, so the water has a chance to soak down into the soil and stop the moment you see any seepage from the drainage holes.

Avoid getting water on the leaves when watering to reduce the risk of scorching.

More on When and How To Water Aloe Plants.

You may choose to fertilize monthly with a balanced liquid houseplant fertilizer in spring and fall or only give it one dose in the spring.

A. squarrosa doesn’t like acidic soils, preferring a pH between 6.6 and 7.5.

A loamy or sandy soil designed for succulents or cactus potting soil is perfect for this plant and may be amended with compost as necessary.

Make sure the soil drains quickly, amending with bark or perlite to ensure it won’t compact.

When grown in containers, transplant every 2 years to give it fresh soil and graduating one pot size higher as needed.

You will know if it needs a bigger pot when you see the roots poking from its container’s drainage holes.

The plant doesn’t require much maintenance, but you may choose to remove dead stems or leaves after flowering.

This plant is commonly propagated through offshoots from the mother plant.

However, you may also start new plants using stem cuttings, division, and seeds with equal ease.

This plant is drought tolerant but easily destroyed by both frost and rot.

The spiny teeth along its margins are much sharper than aloe vera’s, so use caution when handling.

Also, unlike aloe vera, the sap will irritate the digestive system if consumed.

Aphids, mealybugs, slugs, snails, and spider mites are common pests, with chlorosis and root rot being the two most common ailments.

The plant is vulnerable to a few genus-specific problems such as aloe mites, aloe rust, and aloe scale.

This plant is a great addition to many garden themes, including:

While not as well-suited for indoor growth due to its need for low humidity, it can still be grown in outdoor containers and greenhouses, conservatories, and desert-condition terrariums.