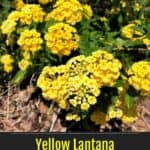 Lantanas are known for their colorful clusters of flowers, but few have found the same success as the Lucky Series of Lantana camara (lahn-TAHN-ah kah-MAR-ah).

In this series are three particular cultivars bred specifically for their yellow blooms that outshine all other yellow varieties and Lantana cultivars.

Be warned that these perennial cultivars come from a parent plant once native to Central and South America and currently considered an invasive species in more than 50 countries. Use care if growing outdoors.

That said, these members of the Verbenaceae family are easy to grow both indoors and outdoors and will quickly bring pollinators to your garden.

There are also many other popular yellow cultivars are out there with nearly identical care instructions (outside of resistances) those in the Lucky Series, including

As a result, while we shall focus on three Lucky Series cultivars, you may use this guide as a baseline for what you might expect with other yellow lantana cultivars.

‘Lucky Pot of Gold’ and ‘Lucky Yellow’ follow the general trend of the Lucky Series of being slightly smaller than regular lantanas.

‘Little Lucky Pot of Gold’ is a dwarf cultivar and reaches a much smaller 10″ to 12” inches around.

The ovate leaves of these plants are dark green, toothed, and textured.

When bruised, they will produce a slightly pungent odor.

One of the biggest draws of the Lucky Series is the fact that it blooms in spring, up to three weeks earlier than other lantanas.

The flowers of all yellow lantanas form flower cluster bouquets that attract butterflies and hummingbirds.

Pot of Gold and other members of the Lucky Series produce fewer berries, instead putting their energy into more blooms, which can last until the first frost.

These cultivars love sun and warmth, so be sure to place them in a spot with full sun to light shade or dappled sunlight.

Likewise, these plants can handle almost any level of humidity, but high humidity may result in fungal infections.

Pot of Gold and other members of the Lucky Series do best in USDA hardiness zones 10 to 12 but may be grown down to zone 8 if the roots are properly sheltered from cold temperatures.

The roots may die if the temperature reaches 32° degrees Fahrenheit, and the plant itself will suffer damage in chilly weather, causing it to die back.

Indoors, room temperature or hotter is perfect for the Lucky Series.

One mature, the Lucky Series is highly drought tolerant and doesn’t like to be too wet.

Using the soak and dry method, give this plant a drink when the soil is dry about halfway down (or around 2″ to 4” inches in the garden), but try not to let the soil dry out completely for better results.

Pot of Gold and her sister plants can be heavy feeders and will need a dose of balanced liquid houseplant fertilizer weekly during the growing season.

Dwarf cultivars, such as ‘Little Lucky Pot of Gold’ will need feeding every two weeks.

Be sure to feed according to the instructions on the fertilizer’s label.

The Lucky series will tolerate almost any soil type, as long as it’s well-drained.

When potted, it will need repotting only every 2 to 3 years to replace the soil and provide a larger container as needed.

Yellow lantanas are low-maintenance plants, and the Lucky Series requires even less.

The latter needs less pinching due to a naturally compact and branching habit, and doesn’t require deadheading to continue blooming.

Prune away damaged or diseased foliage as needed and check occasionally for signs of infestation or infection.

How To Propagate Yellow Lantanas

Unfortunately, most of the popular yellow cultivars, including the Lucky Series, are patented and may not be legally propagated without the express permission of the patent holder.

For those that are legal to propagate, stem cuttings and seeds tend to be the main methods used.

If there was any place Pot of Gold and its siblings become a mixed bag, it’s here.

However, the Lucky Series is a little less tolerant of cold than other lantana plants.

It also lacks any special resistance to common garden pests and may need to be checked frequently for infestations of:

… although pest damage is rarely dangerous to the plant.

Likewise, it is not especially resistant to disease but is mainly susceptible to powdery mildew, sooty mold and root rot.

Use caution when planting Pot of Gold and other lantanas, as they are highly poisonous to horses and grazing animals.

They are also toxic to humans and most pets. Over 50 countries consider lantana invasive, including parts of the US.

When planting any lantana, be sure to take steps to ensure it doesn’t become wild or spread beyond your property.

Lantanas are known to adapt and outperform local fauna by creating hybrids, which can sometimes allow them to take on the appearance of threatened species early in growth.

Pot of Gold is most famous for being a ground cover and border plant, but all yellow lantanas may be used in this capacity.

They also make for excellent houseplants and take up less space than normal lantanas.

The Lucky Series has a more compact design which works well in smaller garden spaces and as a container plant, and even looks good in hanging baskets.

The ability to attract butterflies and hummingbirds make this a nice choice for window boxes, placement on a deck or patio or as an addition to a butterfly garden.