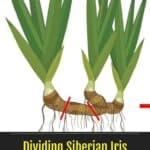 When it comes to irises, the subgenus Limniris is one of the most popular.

Of the six subgenera, this group has beardless flowers and is one of only two rhizomatous subgenera (the Iris subgenus).

As a result, they’re divided differently than the four bulbous subgenera.

The Siberian iris (Iris sibirica) is among the best beloved of all irises. They have one to three branching stems that bear beardless flowers in the spring.

These blooms range from violet-blue to pure blue and (rarely) white.

The trailing rhizome tends to grow into a dense clump. This can eventually overcrowd these beautiful plants and affect their ability to flower.

Siberian irises are relatively easy to divide once you know when and how.

When To Divide Siberian Iris

While one can divide Siberian irises at any point, late summer to early autumn is best.

This practice gives the plant time to gather energy so you won’t miss a blooming period.

Three Rules For Dividing A Rhizomatous Iris (And Most Flowering Plants)

There are three basic rules when deciding when (and if) to divide any rhizomatous flowering plant, such as the Siberian iris.

Not only will the clump become extra-dense, but you’ll notice the central core of the clump dying out.

This core is the oldest part of the plant, and the telltale donut shape of the clump is a clear sign it’s time to divide.

Divide a spring bloomer like a Siberian iris in late summer to early autumn when it’s finished blooming for the year.

The reason for this timing is that the divided rhizomes will need time to establish themselves before they can expend energy on blossoming.

But you may divide most flowering plants in emergency circumstances (such as disease or soggy soil) at any time of year. Do remember they’ll take longer to recover if you do this.

Digging Up The Iris Clump

As mentioned, the rhizomes of a Siberian iris are more demanding than most species. You won’t be able to break it apart with your bare hands.

Instead, you need a sharp, sterile knife or pruning saw.

Each new division will need at least three fans, so you may wish to perform the next step first to help you choose your cutting points.

Or, you may also divide first and examine after if you only need a few new plants.

The central part of the clump is best discarded, as the rhizome is at the end of its life.

Whether you choose to examine the rhizomes before or after dividing, it’s essential to weed out any unhealthy ones.

Tiny holes in the rhizome are a sign of Iris borer activity or the presence of a similar pest, and you should toss it out.

Likewise, any rhizome which is badly discolored, soft, or foul-smelling is either suffering root rot or fungal infection.

It’s possible to cut away the diseased tissue until only healthy tissue remains. But this isn’t always effective and may not result in a viable plant.

Once you’ve determined your rhizome pieces are healthy, you have the option of giving them a little immunity boost.

Dusting them with a fungicidal powder is a quick way to treat them before planting.

Or, you can add 1 part bleach to 9 parts water and dip the rhizome in this solution for 30 minutes.

While this can kill any bacteria or fungal spores, it also means you’ll have to let the rhizome dry for a day or two in the sun before you can plant it.

Prepare the soil ahead of time with plenty of organic compost. Ensure the planting area gets at least 6 to 8 hours of full sun per day (morning or evening sun is best in particularly arid locations).

Excavate a hole for each rhizome approximately 2″ to 3” inches wider than the plant.

It’s generally best to plant the rhizomes in groups of three, with each group member being 2’ feet apart and the fans all facing the same way.

Slowly backfill the holes, spreading out any trailing roots as you go.

The final planting depth should be at the same level as the original rhizome. Some gardeners like to mark the soil level before excavating, although this isn’t necessary.

Gently tamp down the soil and give the plant a good watering.

You’ll want to keep the soil moist but not wet over the next month or so to help it recover from the transplant shock.