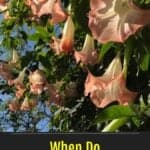 When people think of an angel’s trumpet, two different plants come to mind. Brugmansia spp. (broog-MAN-zee-ah) is a genus of seven species and three variants, all now extinct in the wild for reasons not entirely known?

Their flowers hang downwards, and numerous cultivars exist. The other plants are daturas, with flowers that don’t droop, and were once considered part of the same genus as Brugmansia.

What really makes Brugmansia stand out are the numerous angel trumpet cultivars available, as well as the fact that owning an angel trumpet is helping to preserve the entire genus from extinction.

These plants have massive trumpet-shaped flowers which can grow anywhere from 6” inches to over 14” inches long.

Most have a single color or are bicolor, while B. sanguinea bears uniquely-shaped blooms that have bear three colors.

Best of all, these trees are famous for having a long bloom time.

When do Angel Trumpets Bloom?

However, there are several factors that can affect when – or if – your angel trumpet will bloom.

Just like humans, your Brugmansia has to be pubescent before it’s capable of reproduction.

This generally occurs around 4 to 5 years after germination.

However, you may not know the exact age of your angel trumpet if you bought it from a nursery or independent grower.

Height isn’t a viable way to tell the age of a plant, as they’re often cut back for the winter, and the dwarf cultivar ‘Angels’ Summer Dream’ only reaches 3’ feet in height at maturity.

Try contacting the grower and ask them if they have records of when the plant was germinated or propagated (most growers will keep such documents).

In the event you can’t obtain any records, you may need to wait as much as 3 to 4 years to see the first blooms.

Brugmansias aren’t very tolerant of cold, and even the cold group plants are sensitive to frost.

As a result, you may have to prune your Brugmansia back to a few inches tall when overwintering outdoors in certain zones.

It’s also possible that the plant will die back if hit by frost.

Brugmansias will only flower above a distinctive Y-shape in the growth that differs from regular branching.

Pruning below these Y shapes or suffering dieback can cause the plant to spend the next growth year recovering, which means you won’t see blooms until the year after.

It may be tempting to cheat when growing angel’s trumpets indoors, as you can control the climate.

Unfortunately, this won’t change the plant’s need to rest during the winter.

When provided with enough light, water, and food, your indoor Brugmansia will usually bloom in the spring or (for certain warm group plants) early summer.

There’s a particular joy to growing a Brugmansia outdoors.

While you will need to keep them in containers for indoor overwintering in zone 9b (cold group) or 10b (warm group), you can easily plant one in the warmer zones.

In the correct zones, a planted Brugmansia will bloom in early to late spring but may actually continue to bloom all year long in certain climates.

If you know your Brugmansia is an adult and hasn’t suffered dieback, yet it still isn’t blooming, there are a couple of possible reasons to consider.

The most common reasons are lack of light, water, or nutrition.

Be sure the plant is getting at least 6 hours of full sun (light afternoon shade in arid climates is fine).

It needs about 3” inches of water per week, which equates to the soil drying about 1” inch down between waterings.

Food-wise, you should be providing it with a fertilizer specifically designed for either Brugmansias and daturas or tomatoes (a very close relative).

An infestation or infection can also delay or prevent blooming, so be sure to check your plant’s health regularly.

Another essential consideration is which group your Brugmansia belongs to and how temperature may be affecting it.

Warm group Brugmansias originally grew in the valleys and foothills of the Andes mountains.

They have very little tolerance to cold and may take longer to wake up and bloom if you expose them to temperatures below 50° degrees Fahrenheit.

Conversely, the cold group grew on the slopes of the Andes and have a very mild frost tolerance.

The hardiest of these, Brugmansia arborea, originally grew at altitudes of 6,500′ to 9,750’ feet and is capable of handling brief, minor frosts in zone 9b.

When dealing with a harsh winter that overstays its welcome, even the cold group can suffer a delay in blooming.