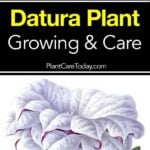 The Datura plant is a native to South, Central, and North American regions. This large plant has pale, grayish-green leaves and white, trumpet-shaped flowers that bloom in the night.

The Datura finds itself associated with plant names and similar species such as Brugmansia (Angel Trumpet) or the Devils Trumpet.

But these poisonous plants come with a marked difference.

While the Brugmansia or Angels Trumpet plant has downward-facing trumpets, the Datura flowers point upward, facing the sky.

Plant experts define the plant as having remarkable flowers shaped like a large trumpet 6-8 inches in diameter, tinged with either a snowy white or with dark, royal purple.

The surrounding bluish-grey foliage makes it unique from other plant species of its group.

The lush, heavy bloom of the Datura is unmatched and a magnificent sight to see. Its exceptional beauty makes it popular among garden enthusiasts and landscapers.

Several species of Datura interest plant lovers. The Jimson weed or the Datura stramonium grows alongside roads and pastures across North America.

It goes by various common names such as the:

Classified as an annual the Jimson weed produces purple or snowy white blooms.

The Sacred Datura grows from Mexico through California and into Oklahoma. Its white blooms sport a slight tinge of pink on the inside and with a slight bluish tint on the outside.

The Asian Datura (the Datura metel or purple datura) with many color varieties – purple, white, yellow, white, and purple and sometimes twin flowers.

Other species include: Datura inoxia

The following round off other known Datura names:

Caring For The Datura Plant

Most members of the genus Datura are hardy perennial plants but are also grown as annual plants. The United States Department of Agriculture lists the Datura in hardiness zone 5 to 7 as an annual, and hardiness zone 8 to 10 as a perennial.

Planting Datura requires full sun coupled with moist, rich, well-drained soil. As a tropical species, they thrive in the warmer months and don’t like frost or winter months.

If left by themselves in winter, every datura leaf will drop and the plant often dies.

Datura plants members of the Solanaceae family that includes the tomato will benefit from extra water during the growing season; the soil should stay moist.

In the winter months, reduce watering but not to the point the soil completely dries out. Come winter season the Datura may go deciduous.

Frost and cold pose the only “growing” weakness of this otherwise easy to grow a plant. The Datura can tolerate poor soil conditions and survive a little drought.

In partial shade, it may become leggy and not produce many flowers. They resist the majority of pests.

You may also like: Red Angel Trumpet Brugmansia Sanguinea

Propagate with Datura seed pods or side shoot cuttings (like Brugmansia). However, most gardeners normally buy the Datura as a plant and transfer them into their own garden.

The Datura grows aggressively, repot each spring season into a larger pot with similar soil types.

A full-grown Datura can reach heights of 8′ feet tall, making it difficult to manage repotting.

Scrape off the top inch or two of soil and replace it with fresh soil. You may also add time-release fertilizer at this point.

After collecting the datura seedlings from brown seed pods, scarify them by carefully scraping the seeds with a knife. This will help the germination process.

Afterward, soak the seeds in a thermos with warm water for 24 hours.

Place the datura seeds in a tray with a thin vermiculite or compost layer.

Give them enough light and heat while keeping them moist but not soggy. Check the seeds daily for three to eight weeks and see if they have germinated.

Remember the juice from the Devil’s trumpet plant is poisonous. More below.

Datura owners will certainly appreciate the full, fantastic blooms on the flowering plants sitting in their garden, but beware as its beauty comes at a price.

Datura plants as a whole are very toxic when consumed. Both man and animal alike will find the leaves, seeds, and attractive blooms all poisonous.

Stories about Datura poisoning in areas where they thrive are a bit saddening but true.

You’ll have to put up a protective fence to keep your children or beloved pets away once you decide that the advantages far outweigh the Datura plant’s lethal disadvantages.

Datura species contain tropane alkaloids atropine, scopolamine, and hyoscyamine. Alkaloids, are a diverse group of plant metabolites with compounds including hallucinogenic substances such as opiates.

Rumors of the Datura plant’s toxicity are part of what makes it a potent hallucinogenic, used as a drug.

This misinformation plays a large part in people wanting to try and smoke the Datura for its supposed effect.

All levels of consumption with no known “safe level” for humans or animals exist when eating the Datura. There are no more digestible forms and no known method of extracting the hallucinogenic properties of this plant.

In growing Datura plants, everyone in the household needs to know of its toxic properties.

Datura plant owners should make it clear that all parts are poisonous and can prove to be fatal when eaten.

In other words, do not even attempt to consume! The one who tends it should also be mindful of wearing gloves all the time.

DATURA (dah-teu’-rah) – A genus of annual or perennial herbs, shrubs, or trees, belonging to the Nightshade Family.

They are mostly coarse, strong-smelling plants, but a few are grown for the sake of their large white trumpet flowers.

They are of easy cultivation, some being treated as tender annuals. The woody Datura species are propagated by cuttings.

Datura arborea is treelike to 15′ ft., with soft-hairy leaves to 8 in. long, and white green-veined flowers to 9″ inches long.

Cornigera grows to 4′ ft. and is almost entirely covered with soft down.

The leaves are chiefly at the ends of the branches, and the white or creamy flowers are very fragrant at night. The floral lobes are terminated by a long spreading or recurved point.

Datura metel (known to many gardeners as Datura cornucopia) is an annual to 5′ ft., with large often double flowers, whitish inside and violet outside, with a purple calyx.

stramonium (Thorn-apple, Jimsonweed) is a tropical annual to 5 ft., naturalized in parts of this country. It has erect white or violet flowers and very prickly fruit. Seeds were first collected in Jamestown Virginia.

suaveolens, tree-like to 15 ft., is often grown in pots undercover, and frequently confused with Datura arborea. However, it has larger and smoother leaves and distinguishing sweet-scented flowers to a foot long, with an inflated calyx.

Datura wrightii or sacred datura is classified as a deliriant and an anticholinergic.