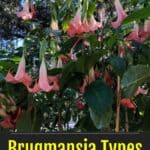 Say what you will about humans causing extinctions. However, we are sometimes also responsible for the survival of species.

Such is the case with Brugmansia (broog-MAN-zee-ah), a genus of seven plants that are all listed by the IUCN Red List as extinct in the wild.

Named after Dutch naturalist Sebald Justinus Brugmans, the genus and its fellow member of the Solanaceae family, datura, are often referred to as angel’s trumpet for the shape of their flowers.

They were initially found throughout the Andes of South America and southeastern Brazil and now exist almost exclusively in gardens worldwide.

The exact reason for their decline is unknown. Still, it’s believed to be due to an unknown primary pollinator going extinct, which could have resulted in plants being unable to reproduce and dying out as a result.

Even though these plants are now extinct in the wild, they live on as collector plants.

The main species can be a little difficult to raise, especially those with unusual bloom colors, but there are countless cultivars to make growing these plants a little easier.

Brugmansia species and hybrids are separated into two groups: the warm group and the cold group.

Species of one group can easily hybridize with others of the same group.

This has led to some of the most popular cultivars, which are from hybrids instead of base species.

These wonderful plants can be grown as a potted plant outdoors in USDA hardiness zones 9 to 12 and be a relatively short 5′ feet tall or peak out at an impressive 24′ feet tall, depending on the species or cultivar.

Their trumpet-shaped blooms are no less impressive, often reaching 10″ inches or longer.

In the garden, these plants stand out as showstopping centerpieces.

Indoors, they’ll stand out when placed near a sunny window and invoke conversation from visitors.

As a general rule, Brugmansia flowers tend to be their most fragrant in the evenings.

Be warned the Brugmansia plant is incredibly toxic. Even ingesting a small amount can cause terrible hallucinations that are known to lead to self-mutilation and other violent reactions.

Originally native to the Andes Mountains, this cold group species is the hardiest of all Brugmansias and is somewhat frost tolerant.

It’s not only the tallest at 23′ feet but has the smallest flowers.

Pollinated mainly by moths, the flowers smell the best in the evening.

The foliage and stems of this plant have an attractive white velvety down.

Be warned that Brugmansias and daturas with white flowers are often erroneously labeled as Brugmansia arborea by sellers.

This large evergreen shrub can grow to an impressive 20′ feet tall outdoors.

Its blooms appear in summer and fall and have a strong pleasant scent in the evening.

Being highly variable, the generally white to yellow blooms may also be orange or pink, especially in cultivars, while the leaves can range in shape or hairiness.

This warm group plant is not cold hardy below 41° degrees Fahrenheit and was originally from Ecuador.

Its leaves are the longest of all Brugmansias, and the plant readily pairs with many other warm species and cultivars, including its own hybrid, x candida.

This hybrid of Brugmansia aurea and Brugmansia versicolor was developed initially as an ornamental for gardens but has since spread from neglected or abandoned gardens, making it an invasive plant in many regions.

Generally growing between 5′ and 10′ feet tall (but known to reach 15′ feet), the flowers on this plant are a massive 12″ inches long and are a blend of pale pink, white, and yellow.

A relatively fast grower, this hybrid reaches 3′ feet tall in the first year and produces sparse blooms, leading many growers to raise it as an annual.

If kept as a perennial, the second year produces far more blooms, and it has more cold hardiness than many other Brugmansias, growing as far north as zone 8.

There are several cultivars of this hybrid, most notably ‘Grand Mariner.’

This warm group Brugmansia cultivar is one of the most stunning, with massive 15″ inch golden yellow flowers cascading off an 8′ to 12′ foot tall, 6′ to 12′ foot shrub.

It’sAlthough it can become infested by the usual garden suspects, it’s highly resistant to disease.

Brugmansia sanguinea is a robust member of the cold group can handle brief, light frosts and is easily distinguished from other species.

The flowers are tubular, opening out only at the very tip.

Colors may be a solid golden yellow, light yellow, orange, pink, or red and range from 6 to 10″ inches long, depending on the cultivar.

However, with a bit of extra care and a lot of luck, the plant is also known to produce a multicolor bloom with a green base, cream to yellow middle, and orange to white throat.

This species was originally found only in Eastern Brazil, far away from any other Brugmansia species.

It’s a recipient of the prestigious Royal Horticultural Society’s Award of Garden Merit.

Originally found only in a tiny portion of southwestern Ecuador, this warm group species has an interesting trick up its sleeve.

Its 15″ inch long flowers are usually apricot, pink, or white, but sometimes the white blooms will change color overnight, meaning you could go to bed with white blooms and wake up to apricot or yellow ones.

Growing between 10′ and 15′ feet tall and wide, it’s not the largest species of Brugmansia and cannot handle temperatures below 45° degrees Fahrenheit.

While resistant to disease, the plant’s corollas are prone to scorching if the weather gets too hot and dry.

This cold group Brugmansia is the rarest of the seven species, native to isolated spots high in the Columbian Andes.

It gets its name (which means “volcano dweller”) for its coloration and soil preference and does better in cooler climates than other Brugmansias while hating overly warm climates.

While this little tree can grow up to 14′ feet tall, it also has some of the smallest leaves of any Brugmansia, measuring only 3.5″ to 4″ inches long.

The flowers usually have a green base, red middle, and yellow throat, but on rare occasions may also be pink.