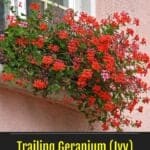 It’s a common fact that the plants you own may not be the actual genus they’re named for.

This is doubly true for the perennial ivy geranium, which is neither a true ivy (genus Hedera) nor true geranium (genus Geranium, commonly known as hardy geraniums).

Instead, this beautiful plant is Pelargonium peltatum (pe-lar-GO-neeum, pel-TAY-tum), a member of the Geraniaceae family and part of a genus commonly referred to as geraniums due to once being considered the same genus.

Native to South Africa, it’s sometimes also referred to as trailing geranium due to its creeping habit.

Depending on the country, it may also be referred by their common names:

The exact size of ivy geranium can vary based on whether it’s potted, supported, or used as ground cover.

As a general rule, it rarely grows more than 1’ to 2’ feet tall and will trail anywhere from 3’ to 5’ feet.

It will get bigger in the ground than in containers and will usually take 1 to 3 years to reach its adult size.

Ultimately, this growth rate will depend on how well it’s hydrated in summer and protected in winter.

What sets these plants apart are the fleshy 5-lobed leaves, which are 2” to 3” inches across and feature a pointed lobe similar to that of ivy plants.

These leaves can range greatly from bright green to gray-green, can be solid or bicolor, and either be hairless or hairy.

There’s no denying that ivy geraniums are heavy bloomers for their growth habit.

Each umbel-like inflorescence bears between 2 and 10 flowers which are scentless and symmetrical.

The petals are generally ½” inch long and ¼” inch wide, varying in coloration from lavender to pink, red, or white.

While an all-year bloomer in its homeland, domesticated specimens will usually bloom only in summer.

The ideal lighting for this ivy plant is full sun in the morning and light shade in the afternoon, especially in hotter regions.

Moderate humidity levels of 40% – 50% percent are perfect for ivy geraniums, but too much humidity or warm humidity can lead to fungal infections.

South Africa is a temperate nation, and your ivy geranium is thus rather heat-sensitive.

When overwintering, be sure to keep it in temperatures above 50° degrees Fahrenheit or give it ample protection from frost.

The plant grows best in USDA hardiness zones 9 to 10 but can be grown in zones 8 and 11 if protected from temperatures outside its comfort zone.

Ivy geranium needs about 1” inch of water per week.

Using the soak-and-dry method, this is easy to monitor and correct.

This plant is a light feeder, and you have three options when it comes to fertilizers.

For indoor plants, you can stick with a balanced 10-10-10 liquid houseplant fertilizer every 2 weeks in spring through summer.

Alternatively, you can use a mix with higher nitrogen in spring for more growth, then switch to a high phosphorous mix for summer to encourage more blooms. More on fertilizing Geranium plants here.

A third option, primarily for outdoor plants, is to use organic compost instead of commercial fertilizers.

Again, cut back in winter so the plant can go dormant.

Good drainage is essential, so augment your soil with perlite or coarse sand as needed, especially in clay soils.

It tolerates a soil pH of 6.5 to 7.5, but augmenting garden soil with some organic compost will usually keep the pH closer to 6.5.

Most potting mixes will work for this plant, although you may wish to aim for one that’s specifically for geraniums.

Your trailing geranium has to be repotted every 1 to 2 years, although the process may seem a little backward.

With most plants, you should avoid handling the root ball too much. But with this plant, the roots are the best part to handle.

This is because the plant has fragile stems but tough roots, so it’s best to loosen the dirt from the container edges and slide the plant out on its side.

Just remember, the roots can still be damaged if handled roughly.

Give it fresh soil and graduate to a container one size larger if it’s becoming root-bound.

There’s not a lot of maintenance required for these plants, although there are a few items of note.

First of all, the stems tend to be brittle, so try to place them where they won’t be damaged.

You can pinch back these stems to encourage fuller growth.

While pruning isn’t necessary, some owners like to prune back their trailing Geranium by half if it becomes too leggy.

Finally, while these plants are self-cleaning, deadheading to encourage more blooms is still a common practice for many growers.

How To Propagate Cascading Pelargonium?

The two most common propagation methods for these plants are through seed and stem cuttings.

The latter is often the method of choice for growers who don’t plan to overwinter their outdoor plants.

These plants are generally easy to care for and are mildly frost-tolerant, although they cannot handle heavy frosts.

They’re not very heat tolerant, which can lead to bleaching of young leaves.

Depending on whether your trailing geranium is indoors or outdoors, it may be susceptible to a variety of pests, many of which are attracted to sickly plants.

Likewise, several common diseases can affect this plant, most caused by improper care.

While consuming a single leaf or petal is usually harmless, ivy geraniums are considered mildly toxic to cats and dogs if consumed in quantity.

They are considered non-toxic to humans, horses, and livestock.