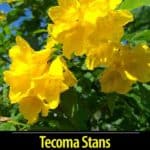 Tecoma Stans [tek-OH-muh, stanz] is a perennial flowering shrub known for its highly attractive and bright-colored flowers from the (trumpet vine) family Bignoniaceae. Also in the family is Tecomaria capensis the orange cape honeysuckle.

It’s native to North America, South America, and Central America and is known as Bignonia stans and Stenolobium stans.

Apart from these botanical names, the plant is widely known by many common names:

The first part of the scientific name i.e. Tecoma is derived from the plant’s Mexican name Tecomaxochiti, which means “vessel flower.”

Stans, on the other hand, means “standing” or “erect.”

Yellow bells are the official flower of the U.S. Virgin Islands.

While many Tecoma cultivars and hybrids have been developed and claim to produce more and better-colored flowers, none of them can beat the cold hardiness and drought tolerance of Tecoma stans var. angustata; Arizona yellow bells.

While it has the potential to grow up to 9’ feet, it typically remains between 3’ – 6’ feet in height when grown in the United States.

It features pale brown to gray colored bark (which roughens as the plant ages), several erect and slender branches, and compound, olive green leaves made of lanceolate (lance-shaped) leaflets.

The plant also produces clusters of long, thin, and slightly flattened pods in autumn, which are fruits and contain numerous papery-winged seeds.

The plant is considered a ruderal species because it is often seen colonizing disturbed sandy, rocky, and cleared lands.

It’s used as a landscaping plant and a nice patio tree. It sometimes becomes an invasive weed.

The bright yellow trumpet-shaped flowers are the major attraction of Tecoma stans.

The pinnate racemes are large, slightly fragrant, and grow in clusters from April till November.

The long flowering season is followed by the production of fruits.

It is native to the Sonoran Desert, which is spread across parts of Arizona, California, and Mexico.

When growing in your garden, make sure to plant the trumpet bush at a site where it receives at least six hours of sunlight every day.

While the plant is likely to tolerate shade, it will affect its growth – yellow elder will not grow as upright and full in the shade as it does in the sun.

An inadequate amount of sunlight also affects the plant’s blooming.

T. stans are likely to go dormant when the temperature falls below 28° degrees Fahrenheit (-2° C) and may also get frost-damaged.

But, it usually grows again in spring; you have to cut it back to encourage new growth.

The water requirements of the ginger-thomas plant are moderate; it prefers moderately moist soil.

However, it is also drought tolerant and is considered one of the easiest plants to grow in desert landscapes.

Too much water will damage the plant, often causing rot and mildew.

Therefore, be careful of watering and add about 1″ – 2″ inch compost layer into the soil, if it’s not well-draining.

However, if it is not growing and/or flowering properly despite the right growing conditions and care, feed it with an all-purpose fertilizer once in summer.

While Tecoma stans is a hardy plant and can grow in almost all types of soil, it prefers organically rich, moderately moist, and well-drained soil.

However, pruning and pinching the spent pods and flowers encourage bushiness and blooming.

Cut back your yellow bell plant, if it gets damaged or dies in the winter, to encourage new growth.

Since the plant grows at a fast rate and spreads up to several feet, it is recommended to plant it at a site where it has plenty of room for growth.

How To Propagate Yellow Bells?

Trumpet bush is propagated through seeds and softwood cuttings.

For propagating through seeds:

Yellow trumpet bush isn’t typically prone to serious pests or diseases, but it is recommended to watch out for whiteflies and spider mites when grown indoors.

The outdoor plants may get infested with caterpillars. Read more on How To Get Rid of Leaf Eating Caterpillars.

Use an organic insecticide (neem) to deal with the problem, if it occurs.

The plant attracts hummingbirds, butterflies, and bees and is also a desirable fodder for livestock.

They are also among the most widely cultivated flowering plants in perennial and rock gardens and are also grown in containers for use as patio plants.

They also complement as well as help enhance the look of Spanish architecture.

In addition to the vibrant flowers, the long blooming period, low-maintenance requirements, drought resistance, low cost, and easy availability are some more reasons for the popularity of yellow elder plants.