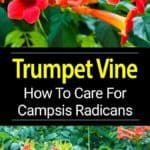 The Trumpet Vine, hummingbird vine or Trumpet Creeper vine is the common name for Campsis radicans pronounced (kamp’-sis), which belongs to the family Bignoniaceae.

Previously named Bignonia and Tecoma, these deciduous climbers are quite widely available.

Learn about the Tecoma vines:

The orange trumpet vine plant is favored for its heavy, clean dark green foliage, and sturdy stems, tipped with clusters of bold trumpet-shaped flowers in shades of scarlet and flaming orange.

Their method of climbing is by aerial rootlets makes them suitable for covering all types of rough surfaces, including tree trunks – but keep them away from wooden walls.

If allowed on wooden buildings they are likely to do damage by loosening shingles. They can make wonderful specimens grown on a trellis.

Flourishing specimens can top thirty feet. These flowering vines need a trellis or other wiring and support when they get heavy. Without support, the wind can whip them loose from their moorings.

Hardiness varies with the varieties; select those recommended for your growing zone.

The growth of the trumpet vine Campsis is most lavish in a rich, fertile, and well-drained soil, in a sunny situation. They are resilient, drought-tolerant, and will grow in a variety of soil types.

The climbers show off best when planted on posts and old tree trunks. Plants will grow in partial shade but for the most plentiful flowers grow the vine in full sun. To increase flowering some extra feedings of superphosphate can also help.

Although full sun is recommended, the vines will grow and bloom in the city where full sun is not always an option, or even near the seashore.

Some gardeners consider the trumpet vine an invasive plant. Its rampant plant growth allows it to spread rapidly and may become a troublesome weed.

Details on How To Kill Trumpet Vine

However, hummingbird vine plants can be kept under control and maintained with proper care and pruning.

To keep these plants in good form and in bounds as well as encourage flowering, the long lateral shoots should be cut back to about two nodes before growth begins.

They flower on the current season’s growth, so severe pruning is required, but not in spring or early summer.

Most professionals recommend cutting back to two to three buds per stem – in late winter or early spring before new growth gets underway.

The opinion is divided on whether or not it is culturally advisable to leave the seven-inch trumpet vine seed pods hanging from the stems, for winter interest.

The trumpet vine can be propagated by seeds, cuttings, of both green and mature wood, root-cuttings, and air-layers.

They can be propagated by stem cuttings in spring placed in a warm propagating case, or by taking cuttings of mature growth in autumn and inserting them into sandy compost or vermiculite in a frostproof frame or cool greenhouse.

Sucker growths provide a ready means of increase, and so do root cuttings.

There are several species as well as hybrids.

The native trumpet vine campsis radicans is the hardiest and can be grown into New England. It can climb to 30 ft. or more by means of aerial roots by which it clings.

There are several garden forms including a yellow trumpet vine flower.

Mature plants are hardy, but young plants may be killed to the ground returning in spring, from the roots.

One variety of bigonia campsis to look for and help the neighborhood attract hummingbirds and keep them well-fed and happy is – Campsis ‘Flamenco’ also known as the red trumpet vine.

Campsis var. speciosa is more of a bush than a climber.

Campsis chinensis, from China and Japan is less hardy and less vigorous.

It is not such a high climber as radicans and produces fewer aerial roots, but has larger and more brilliant, large clusters of broadly lobed, deep-orange, and red flowers in late summer.

Several hybrids have been raised from this as a parent; one of these is named Campsis Tagliabuana.

It is neither so high nor so unruly as Campsis radicans, and some of its hybrids are even more refined and graceful. Three-inch scarlet flowers appear in late summer.

Not hardy North Campsis hybrida, a hybrid from two species, is intermediate in hardiness and habit, with flowers almost as large and showy as those of the Chinese parent.

‘Tagliabuana’ (‘Madame Galen’) – A hybrid of the two species, and considered more desirable.

Soft apricot-orange flowers are two inches across and three inches long, in bountiful clusters from July on.

It is less lusty, gives a more open effect, and requires less pruning and control. I have seen it grown as a specimen and as a hedge.