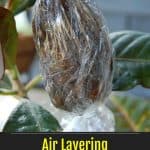 One of the oldest methods of propagation is by air-layering. It may not be the fastest method, but it does allow you to start with a much larger plant or a tree.

Woody-stemmed tropical plants, grown in a pot, in apartments, homes, greenhouses, and outdoors in the Deep South make ideal subjects for air layering.

What Is Air Layering?

Air layering trees is an ancient Chinese method of getting roots to develop on shoots or stems above the soil in order to increase rare or unusual plants like:

Use the air layering propagation method to make smaller, more attractive plants out of Dracaena Marginata, to grow a Ficus tree standard, philodendrons and dieffenbachia plant stems – in fact, most any house plant which has hit the ceiling or has become leggy and unsightly.

The practice of air-layering has been simplified and the chances of success greatly increased by the development of plastic film.

Mr. Eaton combined root hormones, plant nutrients and pesticides into a water-soluble green dyed “ink” and was printed in green stripes on a Krene plastic film. As with most newly introduced products, plastic film for air-layering has been improperly used at times and, consequently, has failed to produce roots.

At other times failure has been due to the use of excessively thick stems, improper slitting or girdling of the stem or the use of overwet sphagnum moss.

I have successfully propagated air-layered woody stems of rubber trees, Dieffenbachia, and both indoor and outdoor plants with plastic bags for years now and would like to pass my experiences with indoor air-layering. Air-layering trees and shrubs outdoors will be the subject of a future article.

Plant Propagation: How To Proceed With Air layering

After selecting the mother plant for air-layering, the first step is to wound the stem to the point where you want roots to form.

This asexual propagation method of wounding is done with a sharp knife in either of two ways: by making a longitudinal upward cutting for an inch or so into the center of the branch, or by removing a complete ring of bark, the cambium layer, and the xylem about a half-inch wide from the stem.

After removing the cambium, xylem, and ring of bark, wrap with a handful of moistened sphagnum moss the whole area, including an inch or so of the stem on both sides of the cuttings.

Squeeze out all excess moisture before adding the moss. The sphagnum moss must not be dripping wet when applied to the wounded stem.

Finally, cover with a sheet of plastic wrap film or aluminum foil carefully over the sphagnum moss ball with the upper and lower ends twisted around the stem and securely tied.

In plastic wrapping and tying, the sphagnum moss should be well contained with no openings remaining in the film.

The wound made on the stem interrupts the downward movement of elaborated plant foods and hormones. This sets up a stimulus which initiates the formation of callus tissue and the development of roots at the upper zone of injury.

The moist sphagnum moss keeps the atmosphere around the wound moist of the stem which is favorable for new roots to develop.

Finally, the plastic film, polyethylene film or aluminum foil wrapping keeps the moisture sealed in and eliminates the need for ever moisturizing the moss. At the same time, these wrappings allow gases to move freely in and out of the air-layer.

New roots form inside and the air-layer can be detected because the plastic covering is fairly transparent.

Once the root system forms on the stem, the job of producing the new plant is only half done. The rooted stem is still attached and must be cut from the parent plant just below the rooted area and then potted.

The cutting or new plant must be set in the shade and away from drafts for at least two weeks to allow the new roots to become accustomed to the new medium.

We answered the question of “How to Air Layer”? but you want more! Check out this video.

For more check out Crafts of Mass Destruction, you’ll find some nice close-up images and a tutorial on air layering a croton. Check out the tutorial via craftsofmassdestruction.