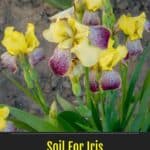 When it comes to planting genera that are quite complicated yet easy to care for, the many types of Iris (EYE-ris) are among the top names on the list.

There are 6 subgenera, two of which grow from rhizomes, and four grow from bulbs.

They can be found in every part of the world except Antarctica (and we’re sure to find fossils of them if the continent ever thawed out).

Some prefer drought conditions, while others (blue Louisiana Iris) grow near lakes and bogs.

That said, there are only an estimated 300 species (but countless cultivars) that tend to follow very similar care requirements with one another.

One such requirement is soil.

What Is The Best Soil For Iris?

While the rules are a little between individual species or cultivars, the general rule is a well-drained, organically rich soil with a pH of 6.5 or slightly higher.

Always be sure to check in case your particular specimen requires special conditions.

It’s a common myth that all irises have bulbs, and sadly, this misinformation is often provided by experts in the field.

These plants require a degree of root exposure to know when to wake up or go dormant.

You will need to keep the top ¼ of the rhizome above soil level when planting.

This is especially important because rhizomatous irises cannot be covered in compost or other amendments.

On the flip side of the coin are the other four subgenera, all bulbous and had previously been classified into separate genera.

These need to be planted below soil level, and you can add a layer or two of compost or mulch without worrying about whether they’ll start growing come spring.

Note that many water-loving irises are Limnirises, which have slightly different soil needs than other irises.

Soil For Most Iris Species

Most irises will require a loose, well-drained soil type with a pH of around 6.5 to 6.8.

The quality may be average, allowing you to plant in sandy, loamy, or clay soils.

Heavy clay soils will also work if you amend them with perlite and plenty of compost.

You may wish to elevate the bed or place a gravel substrate under the planting area to aid in drainage.

Be warned that you will need to have at least 30% percent coarse sand if you choose to use that as the aggregate, or the clay will harden into natural concrete when it dries.

Compost is an excellent way to enrich the soil, but avoid using a lot of green compost, as the high nitrogen content could lead to rot in damp weather.

As irises like having extra nitrogen, consider mixing in some of the following:

The nitrogen content found in coffee grounds feeds beneficial microorganisms that would otherwise drain the soil nitrogen (think of it as how you prefer coffee to tea in the morning).

As plants have trouble absorbing the nitrogen in coffee, this encourages good soil health and helps them get more nitrogen from the soil itself.

To check its quality, always test your soil every few years.

A good time is when you’re repotting your container irises.

You can adjust the soil pH by adding lime to acidic soil or sulfur to alkaline soil.

When potting an iris, you can use just about any potting mix as long as it’s not too nitrogen-rich (this can hinder blooming).

Alternatively, you can make a soilless mix using the following:

Irises that grow near swamps, bogs, or water features have slightly different needs.

As with the drier varieties, you’ll want organically rich soil with a pH close to neutral.

Still, there are plenty of examples of irises out there that have poorer growth when exposed to a lower pH.

Avoid sandy soils with these plants, as they like wetter conditions, and some can even survive being partially submerged.

Instead, aim for a loamy to clay soil consistency, making sure heavy clay soils have some aggregate, so it doesn’t compact too much for the roots to expand.