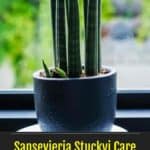 Sansevieria stuckyi better known as the elephant tusks snake plant has been the victim of mass renaming in recent years, with the plants in the Sansevieria genus now officially part of the Dracaena genus.

As a member of the Asparagaceae family (which was formerly named after dracaenas), this name change (based on DNA similarities) is hotly debated and most fans of the genus refuse to use the new names for multiple reasons.

It’s named in honor of Mr. Stucky, a collector who is credited with first collecting the seeds of this plant 2 years before it was documented.

Whether you prefer to call it Sansevieria stuckyi or Dracaena stuckyi, this plant can be quite captivating and an easy houseplant to care for.

If you’ve never seen this plant, it can be best described as an aloe vera on steroids.

The leaf-like stems can reach a height of 7’ feet tall and as thick as 2” inches at the base.

These stems are generally upright, forming thickets, but have a habit of being slightly messier when young, again resembling the aforementioned aloe.

It’s a slow grower, but in this case, that gives you the chance to enjoy its juvenile form longer.

The juvenile “leaves” are shaped just like those of an aloe vera (minus teeth) and a dark green color with pale green horizontal stripes or bands.

Upon reaching maturity, those stems become succulent and wound with a slight vertical indent where the inner curve was.

More rigid and vertical, the mature stems are a lighter green and quite hardy.

It can be almost impossible to get this plant to bloom domestically.

However, those lucky enough to see one bloom will discover small white flowers on an 11″ inch stalk that have a pleasant smell.

Unlike most plants, elephant tusks are tough plants and can handle almost any lighting situation from full sun to low light indoors.

In hotter regions, it’s generally best to grow outdoor plants in dappled bright light or partial shade to prevent the risk of sunburn.

You may prefer to also choose your lighting based upon the desired coloration.

In brighter light, this plant will display more vibrant colors, while it will be darker shades of green in lower light.

Try to avoid a spot that has full shade all day, however, as the plant will not be as hardy or full.

Instead, try to find an indoor or outdoor spot that has good lighting at least part of the day for the best results.

This plant can also tolerate most levels of humidity, although the level will affect how often it needs a drink.

Best grown outdoors in USDA hardiness zones 10b to 12, some growers have also had success in zone 10a.

Exposure to harsh or prolonged frost will result in permanent damage to the stems.

This snake plant isn’t a heavy drinker and highly susceptible to root rot if overwatered.

Use the soak-and-dry method to ensure the plant gets just the right amount of moisture.

Pour slowly and evenly until you see moisture seep from the drainage holes.

In low humidity or spots exposed to direct sunlight, the plant will need to drink more frequently.

Be sure to cut back on watering during the winter months so the plant can have a rest.

Meanwhile, this plant is also not a very hungry one.

Any balanced liquid cactus fertilizer or even a general fertilizer will work, applied according to the instructions on the package.

A loose, well-draining potting mix is best for this plant.

Potting mixes with good drainage and designed for cacti or succulents will work, especially with a little added coarse sand or perlite.

You can also use your favorite soil free mix (such as moss and perlite).

Elephant tusks plants tend to prefer being rootbound, and will only need repotting when you see the roots begin to poke through the drainage holes (although a repotting every 2 years or so to change out spent potting soils is also a good idea.

The only real maintenance this plant will need is a weekly wipe down with a damp cloth to remove dust when growing indoors.

It doesn’t react well to chemicals, so stick to just water when wiping.

How To Propagate Dracaena Stuckyi

Division is the most popular means of propagating your snake plant collection, although both offshoots from the parent plant and leaf cuttings will work.

In the very rare event, you get this snake plant to bloom, the seeds are a viable fourth option.

While fairly drought resistant, this plant isn’t cold hardy and is highly susceptible to root rot from overwatering.

It can be attacked by aphids, snails and slugs, mealybugs, spider mites, and weevils; although none of these are particularly dangerous to the plant.

The leaf-like stems of the elephant tusks may look pretty, but they’re toxic to both humans and pets.

The tall growth habit of this plant makes it an excellent barrier plant.

Indoors, this same habit makes it perfect for rooms with limited space.

The coloration can make it an attractive addition to entryways and patios, especially during its juvenile years.

It also makes a good choice for partial shade areas in the garden.