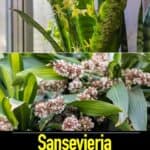 Many things cause plant lovers to stock up on Excedrin, such as disease, infestations, a plant refusing to bloom.

But one ongoing problem creates more outrage and confusion than the others combined: Reclassification.

Sometimes the change makes perfect sense. Sometimes it’s the result of endless bickering (ex: are all Adeniums their own species or just offshoots of Adenium obesum?), and some, such as the reclassification of sansevierias, make little sense and have resulted in public backlash.

Let’s take a moment to look at when all Sansevieria varieties lost their name, why, and how this may affect you as a lover of snake plants.

Sansevieria Has Been Reclassified As A Dracaena

As with many plants, the genus Sansevieria (Snake Plants) was originally named in honor of a person.

Modern science has now determined where in the plant kingdom sansevierias fit and has merged it into another genus – Dracaena.

There are a few common reasons why a plant’s botanical name may change, and this often has to do with the fact that there are numerous classification systems.

These systems (the nomenclature of plants developed by Linneaus in the 18th century) sometimes contradict one another, leading to a lot of confusion.

However, the following reasons tend to be responsible for the modern renaming of plants:

The plant was named due to observed factors.

Sometimes a plant might be mistaken for another plant because they have similar growth habits or look the same.

At other times, a plant may appear in two different places, leading to it being named twice (ex: Alocasia Amazonica and Alocasia ‘Polly’).

As these accidental namings are discovered, they’re corrected by reclassification.

The plant was named for a person.

The names to plants sometimes honor botanists or other individuals.

While this is generally still an accepted practice, the APG (Angiosperm Phylogeny Group) classification system, among others, is slowly changing many plants to descriptive names.

The plant is genetically related to another plant.

This is currently the most common reason for reclassification.

As science begins to explore the genomes of different plant species, they’ve discovered many species and genii overlap.

This is true of older classification systems based on appearance and in cases of plants that turn out to be hybrids instead of natural species.

The Case Against Sansevieria

Sansevieria was examined using molecular phytogenetics, a type of phylogeny which seeks to classify plants based on their DNA and create a more accurate plant family tree.

In this particular case, the APG IV (published in 2016) argued that the genetic structure of sansevierias was too closely related to dracaenas.

As a result, they merged (or subsumed) the former into the latter.

Not all classification systems agree with this decision, but the APG and other phylogenetic systems have been growing in popularity and tend to act as a plumb line for botanists.

For a more detailed account of how this research was conducted for sansevieria and what they found, check out this video which includes interviews with experts whose work has led to or supported the reclassification.

As might be expected for such a beloved genus, fans of sansevieria were outraged by the name change.

Many enthusiasts vowed to continue calling their snake plants by the former name.

Their argument was that the name had been the same for over 200 years, so they can’t be expected to call it something else suddenly.

Some responses stated this is using very floral terms that had little to nothing to do with gardening.

Others went a more logical route, pointing out that there were no similarities between sansevieria and dracaena once you put the microscope away.

They look different, have very different care needs, and even their uses and benefits are different.

This will likely remain a hotly debated decision for years to come, and this may be one of those plants where different classification systems will maintain different botanical names.

Such things are increasingly common and can prove frustrating for nurseries and other sellers, as well as information sites that may forget when a plant has multiple active botanical names at once.

What Sansevieria’s Renaming Means for You

Scientific or botanical names will mainly affect you if you’re trying to order a plant online.

For example, it will be progressively harder to locate Sansevieria trifasciata as nurseries convert to the new name of Dracaena trifasciata.

The good news is that you can propagate your snake plant and avoid buying new ones of the same species altogether.

Also, no official Name Police come knocking on your door and demand you stop using the name sansevieria, so it’s up to you which name you use for your plants.