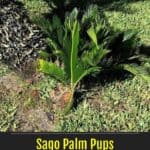 Sago palms are known scientifically as “Cycas revoluta.” The plant is native to Southern Japan and is considered a hardy plant.

Despite that, they’re not true palms. Sagos live for a long time and don’t produce “flowers.” Instead, have cascading fronds just like palms.

True palms are known for their capability of being divided into two through splitting. Since sago palms resemble true palms in many properties, a lot of people wonder, “can you split a sago palm?”

In this article, we’ll answer this question fully and walk you through a brief guide with information on dividing sago palm. So without further ado, let’s hop in!

Can You Split Sago Palm?

As the name suggests, the plant is falsely named as palm when they are not. Instead, they’re considered a cycad.

A cycad is a group of seed-bearing plants that is more related to conifers than palms. The plants have a very long fossil history, which means that they’re pretty ancient plants.

Palms can be split by finding the roots that feed one of two strong stems that feed the plant and separating them to divide them into two palms.

If by splitting, you mean this exact technique, then the answer would be simply no. If you see a split that forms two heads in your strong-stemmed sago palm, you still shouldn’t consider dividing them into two.

Unlike real palms, chopping off heads or performing split incisions on the tree stem or trunk down the middle will result in the eventual death of your sago palm because the tree would never heal from such cuts as true palms do.

However, if by splitting you mean having a new sago palm offsets from a parent one, then you’d be lucky to know that you can achieve that through a technique known as “offsets propagation” or “pups propagation” in the case of sago palms.

Is Splitting Palm the Same As Pups Propagation?

To answer whether you can split sagos, you have to understand the botanical concept of palm splitting and compare it to the options you have in the case of sago palms.

The main concept of splitting in palms relies on their growing new plants or suckers at the base of the palm. If the palm is nurtured enough and has several strong stems, you can easily split it into divisions if you’re able to identify the roots feeding a specific stem, then divide it from the original plant.

On the other hand, some plants, like sago palm and some cactus plants, produce an offset known as pups.

These pups are simply a miniature version of the parent plant that usually grows at the base of the plant where the growing tip is found.

Offset propagation is the process that involves removing these pups from the parent plant, then planting them separately in a potting soil where they’re treated as a standalone plant.

In smaller potted plants, this process is sometimes a critical one to relieve the congestion in the pot.

Based on the vast difference between the two methods, it’s safe to say that splitting a palm is totally different from propagating a sago palm pup!

Propagation of Sago Palms: How Can You Divide a Cycad?

There are a couple of ways to divide a sago palm. Let’s have a quick look at each one of them.

The most common method to divide sago palms is pup propagation. In this method, you simply cut off the pups or clones found at the base of a mature plant.

To do it, you need to find where the pup is attached to its parent plant, then cut it at the base with a sharp knife or simply wiggle it until it pulls off on its own.

After separating the pup, you can propagate it by removing any roots or leaves left on the Sago pups and leave it in the shade for 5 to 7 days until it hardens. After that, plant the pup in a sterile potting soil mixture in a pot with drainage holes after dusting it with sulfur.

NOTE: When separating pups, I always allowed them to dry out for a few days before planting. When planting, I usually put the pups into coarse dry sand soils until they started to root.

Seed propagation requires male and female sago plants to grow nearby. Pollination can occur either manually or by insects or wind. After the plants seed and mature in fall or summer, you can plant them separately.

Is Sago Palm a Hardy Plant?

Ideally, the sago palm is considered a tropical plant. However, the plant can tolerate mild to relatively cold temperatures if the ground is dry enough.

According to the U.S. Department of Agriculture, the plant grows in hardiness zones 8 or 9 through 10.

So despite their ability to survive cold weather for a brief time, you shouldn’t keep them in extremely cold weather if you’re looking for optimal growth.

The ideal growth temperature of the plant is around 80° degrees F per day and 60° degrees Farhenheit per night.