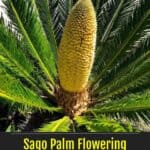 Sago palm plants aren’t palms at all. They only resemble these slim trees in the way they put out their fronds. It’s the flowers that give away the true nature of sagos, which is a cycad.

Cycads are ancient evergreen plants characterized by being gymnosperms or cone-bearing plants. There are around 300 different species of Cycads known to us, and the botanists are still exploring and finding more.

Believe it or not, a close relative of the sago palm is the pine tree, which illustrates the cone-bearing trait in a more obvious way.

There are separate male and female plants. The female flowers hold the seeds in a rounded cone, while the male plant produces tall pollen-filled cones.

Sagos usually have a queen sago and king sago, depending on whether they’re males or females.

Sago palms are initially from Japan, which explains why they’re more successful indoors or in partially shaded outdoor areas.

What’s the Right Way for Cutting Off Sago Palm Flower?

Sago palms are relatively slow growers, and they often put out new fronds once every year or so. That’s why pruning sago palms isn’t an everyday activity that gardeners carry out.

Additionally, the flower heads start showing when the palms are around fifteen years old. The flowers then come out approximately every three years. This may occur more frequently among growers who have prosperous sago palms in their gardens.

In the following sections, we’ll explain the right way to cut off sago flowers and whether or not you have to do that.

Is Cutting Off Sago Flowers Necessary?

Leaving the sago flowers shouldn’t be a problem. But, most growers keep the sago palms for their neat appearance, and the cone-shaped flower head may detract from that. Also, it doesn’t add any particular benefit to the plant.

Our Best Tips For Cutting Off Sago Flowers

We have a couple of sago trees in our garden, and we’ve seen several of them throughout the years in parks and woodlands. Comparing the way these plants look with and without their flowers and cones, we’d say that we prefer the cut-off appearance.

Some gardeners are apprehensive about causing damage to the plant as they remove cones. It’s important, of course, to proceed with caution as you go about pruning sago palms. And here are some of our best tips on how to do it.

A clean cut is necessary to keep the neat appearance of the sago palm. We recommend using an extra sharp curved knife to remove the crown without scarring the plant too much.

After that, you don’t need to do anything at all. A scab will form in a few days, and a new frond will emerge from it within the next year.

If you have a queen sago palm, you can harvest a bunch of its seeds. But first, you need to get them pollinated by a king sago palm cone.

If you have one nearby, nature would perform that function. If not, you need to find a recently cut king sago cone.

The seeds need to stay in their cone to grow fully. And once they become ripe, you can cut off the whole flower. You can then germinate the seedlings and replant them in the garden or little pots.

It’s worth noting, though, that propagating sago palms through seedlings isn’t easy. Usually, these plants reproduce by the gardener taking a cutting from the side shoots of their bark.

Related: 5 Ways To Get Rid Of Sago Palm Scale

After you cut off the king sago palm cone, you could use it right away for pollinating nearby queen sago palms. Also, you could put it in a plastic bag and take it to further off sago plants. It could still be usable after a few days, provided that it’s well-stored.

Almost all parts of the sago palm are toxic, but the nut-like seeds that grow inside its flower have the highest toxicity. If you have children around the house, choosing a different plant would be wise.

Birds and pets could also sample their seeds, and the results aren’t pleasant. Some of the more experienced birds only peck the outside layer, but it’s still advisable to cut off that part of the plant.

Leaving the seed crown without cutting or pruning will leave the sago palm looking a bit messy. The disintegration of the crown takes some time, and it could be an eyesore if you only planted this tree for decorative reasons.