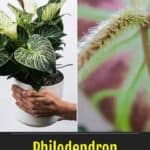 Native to Columbia, Venezuela, and the Caribbean, there are currently about 489 accepted species of Philodendron (fil-oh-DEN-dron), with many more potential species benign debated in other parts of Central and South America.

The genus name means “tree-loving” and is a reference to the general climbing nature of many philodendrons.

Philodendrons are hemiepiphytes, meaning some spend their entire lives as epiphytes (tree climbers) while others may begin as trailing plants until they find support to climb and possibly convert to an epiphytic habit.

Philodendrons have a wide range of uses in South America, from culinary and ceremonial to use as a poison in hunting.

However, the rest of the world treasures them for their ornamental use.

Depending on the species or cultivar, some philodendrons are used for hanging pots or allowed to climb up vertical supports.

Others are used as a ground cover.

This is the perfect philodendron for those who know variety is the spice of life.

New leaves begin as small ovals, but as they mature, they form deepened lobes like an oak leaf and reach an impressive 9” inches long at maturity.

When grown indoors, it remains evergreen and can reach 3’ feet tall with proper support.

Best of all, oak leafs don’t require any different care than your other philodendrons.

The spear-shaped leaves of Philodendron Billietiae are narrow, thick, and leathery with a length of up to 3’ feet and a blade width of 10” inches.

The deep green base coloration is accented by horizontal veins and a pale center, as well as long, pale orange stems.

This fairly recent discovery has no special care conditions, although the stems may fade in low light conditions or as they get older.

While it initially has an upright habit, it will begin creeping horizontally to find support if you haven’t already provided one.

A slightly slower grower, ‘Birkin’ has the same care needs ass most philodendrons but is a little more sensitive to overwatering.

It forms a compact 2’ foot tall plant at its maturity and is known for spontaneous mutations.

The big draw, however, is the radial pin-striping over its dark green leaves, which is unique to each leaf.

There are plenty of plants out there with brightly-colored foliage but not enough dark-leafed plants to give a good contrast.

These impressive paddle-shaped, pointed leaves start off with a pinkish hue and darken as they mature.

While there are some variegated versions of this cultivar, ‘Black Cardinal’ itself prefers average philodendron care with slightly less light.

This fancy-looking cultivar has the popular heartleaf shape but is far more colorful.

The foliage has random yellow splotches and a lime green central stripe.

Whether grown from a hanging pot or container, Philodendron ‘Brazil’ is a beautiful choice that often gets overlooked.

The only real difference in care is the need for light shade from the indirect sun if you wish to keep the variegation.

This upright, clumping grower reaches about 2’ feet tall and wide and is an excellent groundcover for more southern states.

The cultivar has elongated, paddle-shaped foliage with deep lobes and pale veins on its shiny green surface.

When young, this plant’s leaves are dark, velvety, and more triangular, but they become heart-shaped with long rear lobes as they mature.

Fully matured plants go through yet another change, with the leaves becoming 3-lobed and nearly 8” inches long.

While not immediately visible, the leaves have a reddish tint that can give them pink highlights in bright light.

The best part is that this species uses standard philodendron care and remains small, even when climbing.

Instead of climbing or creeping, it grows in an almost bushlike habit to around 2’ feet high and 2.5’ feet across.

New leaves are a deep, shiny red that fades to burgundy green as they mature.

Overall, it can be cared for like any other philodendron but is far more sensitive to cold.

The heart-shaped leaves of Philodendron Red Emerald are accented by deep red veins.

It makes for a wonderful indoor plant with a height of 6.5’ feet and a width of 5’ feet when properly supported.

However, you might want to keep this fast grower outdoors, where it produces attractive, deep red flowers.

This species can seem rather flimsy when it’s young, and it’s a more compact, low-growing creeper than many other philodendrons.

However, as it grows, the pink-veined, heart-shaped leaves unfurl and grow to as wide as 3’ feet, with the pink fading away.

These veins are slightly indented, giving the velvety foliage a slightly ruffled appearance.

Be warned that this species hates the cold and needs drier soil than most philodendrons.

This little creeper is most often propagated for sale using tissue cultures, so it tends to remain on the smaller side.

That said, its leaves can grow to around 10” to 18” inches wide and are thin, semi-gloss, and gently rippled.

Its silver leaves can vary greatly and tend to remain evergreen.

Philodendron McDowell is a cross between Philodendron pastazanum and Philodendron gloriosum isn’t the easiest to find but has very similar care requirements to most philodendrons.

The large, heart-shaped foliage has prominent white veins that really make it stand out.

Sometimes referred to as the black gold philodendron, this dark-leafed species has dark green leaves that are so dark they’re nearly black with tiny gold flecks dotting the surface.

In its early life, Philodendron melanochrysum was a creeper with small, oval leaves that have a reddish hue.

As it matures, it needs good support to climb and will reach 3′ to 4′ feet tall, with its foliage becoming dark and velvety, with some reaching 2′ feet in length.

While it needs slightly drier soil conditions, general care is the same as with other philodendrons.

The only downside to this elegant species is the higher price tag.

Philodendron Mexicanum was discovered in Mexico and has narrow, triangular foliage with long lobes developing along the backs as they mature, flopping over in an almost dog-eared fashion.

It needs slightly brighter light than most philodendrons and is a little more drought-tolerant, but be warned that it likes to seep sap (to attract ants), so it can make surfaces a little messy.

When given adequate support, this plant will be more compact and reach 6’ feet or more in length.

Sometimes it’s all about perspective, which is the true beauty of Philodendron ‘Micans.

Depending on the angle light hits the foliage, they can appear to be dark green, light green, or bronze, with reddish undersides and fine hairs that can make the heart-shaped leaves appear iridescent.

The only special requirements for this 6’ foot trailing cultivar are bright, indirect sunlight, and a little more water.

This hybrid bears bright yellow-green leaves, which deepen to dark green as they mature, while neon yellow mottling remains.

Mature leaves tend to be 12” inches or longer, especially if the plant is allowed to climb on a sturdy support.

The heart-shaped foliage of Philodendron Plowmanii has vein indentations that give it a sculpted, slightly ruffled appearance.

While young leaves have a silvery hue, this fades to green or yellowish hues.

Not only is the plant attractive in its own right, but it’s one of the easier philodendrons to care for.

This upright cultivar has beautiful orange leaves that turn green as they mature.

Its petioles are a deep red, and an adult Philodendron ‘Prince of Orange’ grows to about 2’ feet tall and wide without the need for staking or special care.

The best part about this cultivar is that it has an exotic appearance without an exotic price and is widely available for purchase.

The serrated foliage on this cultivar is simply stunning, with cream, green, orange, red, yellow, and white variegation that resembles living flames when a breeze hits.

It’s a relatively slow grower, and half the fun is waiting for newer leaves to unfurl themselves so you can see what the unique pattern will be.

Each leaf grows on its own stem from the central trunk reaching up to 2’ feet from trunk to tip.

Philodendron Sodiroi is an attractive cultivar is sometimes referred to as silver leaf philodendron and has silver-mottled heart-shaped leaves which grow between 5” and 8” inches long at maturity if the plant is allowed to climb.

Alternatively, it makes for a beautiful display when cascading down from a hanging basket.

The deep-lobed oakleaf foliage on this species can reach nearly 2’ feet in length and is attached to furry, red-bristled stems.

It’s a moderate grower which can eventually reach the ceiling when given proper support without overtaking a room or requiring special care.

This brightly variegated cultivar has the popular heartleaf shape, but each leaf bears huge swaths of silver to the point that often, only the veins are still green.

It’s a fast climber and makes a great statement, whether supported by a bamboo pole or dangling from a hanging basket.

Unlike most variegated plants, your Silverleaf will actually retain its variegation even in low-light conditions.

One of the thirstier philodendrons out there, Philodendron hastatum ‘Silver Sword’ may soon suffer the same fate as the angel’s trumpets, which are extinct in the wild but thriving domestically.

It likes being pinched back early in the spring and had metallic grey-green lanceolate leaves.

When allowed to spread out, it can reach an impressive 10’ feet in length.

It has several cultivars and is often sold under several improper botanical names.