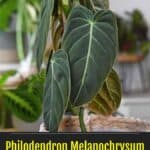 In Texas, fossil fuel oil has earned the nickname “black gold” due to its almost instant riches to early oil barons. However, deep within the rainforests of Columbia and Costa Rica, a type of black gold hasn’t been fossilized yet.

This rare treasure is a member of the Araceae family called Philodendron melanochrysum  (fil-oh-DEN-dron mel-an-oh-KRIS-um) – literally, the black gold philodendron (melano means dark or black, while chrysum comes from chrysos, the Greek word for gold).

The name is sometimes shortened to simply “melano plant”, and it’s one Philodendron you’re sure to treasure!

Note that you may find growers selling this plant under the name “Philodendron andreanum’. It was the original name given to the plant by its discoverer Eduoard Andre back in 1886, although this isn’t considered an official botanical name.

Most plants grow a bit shorter indoors, but the difference in melano plants is extreme.

Indoors, you’re most likely to end up with a 3’ to 5’ foot tall plant even with proper support.

However, outdoors it’s known to tower at an impressive 20’ feet tall in the right conditions.

Growing speed varies based on how ideal its environmental conditions are, but it has the potential to be a fast grower, adding up to 2’ feet to its height annually. Indoor, semi-neglected plant growth can be much slower, resulting in it taking up to 10 years to reach a mature 5’ feet tall.

It’s strongly recommended that a bamboo or moss pole (or a good trellis) be provided so the plant doesn’t bend under its weight. You may need to loosely tie the stem to its support, at which point it will begin to hurry up the surface.

When properly supported, the heart-shaped leaves dangle straight down like scales on a fish and can reach a stunning 2’ feet in length. But that’s only the canvas upon which the actual show takes place.

New leaves are a golden yellow to coppery-red, which turn brownish-orange to bronze as they begin to unfurl and darken to a nearly black shade of green.

The veins tend to remain a lighter green to near-white, and you may see a hint of iridescent red along the surface when the light strikes at just the right angle.

Topping out this incredible display are tiny gold flecks across the leaf surface.

The result is a treasure straight out of Solomon’s vaults or Aladdin’s cave.

Something black gold philodendrons have in common with most plants in the genus is that flowers are highly uncommon.

In fact, on the very rare occasion your plant does bloom, it’s usually best to remove the inflorescence immediately because they’re unremarkable and draw valuable resources away from the creation of new foliage.

When growing the plant outdoors, you’re more likely to spot its green and white spathes and spadixes developing during the summer months.

Philodendrons are (mostly) epiphytes, meaning they cling to trees and have adapted for life under a forest canopy which means direct sunlight can easily scorch your plant’s leaves. Instead, melano plants prefer bright, indirect sunlight.

This means placing one beside or across a sunny window where the sunlight won’t directly hit them. Also, using a sheer curtain as a protective barrier or even the foliage of sun-loving plants to create dappled daylight.

Grow lamps are also a great alternative to keep this plant in a dorm or office setting.

Be warned, however, that this plant is less tolerant of shade than non-variegated kin, not only due to its variegation, but a partial shade or darker can slowly kill your melano plant.

Another slight difference between this Philodendron and the majority of its kin comes from its moisture preference.

While it will indeed grow lush when the humidity is 60% percent or higher, the plant is happier overall in normal household humidity levels (generally 40 to 60% percent).

A kitchen or bathroom is thus perfect for them, but you can also augment the humidity by using pebble trays or a humidifier.

If you’re lucky enough to live in USDA hardiness zones 9a or warmer, you can grow your black gold philodendron outdoors.

However, they don’t like temperatures below 60° degrees Fahrenheit and exposure to frost can potentially kill them. This means that you will likely need to overwinter the plant indoors or provide shelter if you live in any zone colder than 12a.

Indoors, the plant is most comfortable in a temperature range of 65 to 80° degrees Fahrenheit, especially if the room gets a little warmer in the day and cooler at night to mimic nature.

As usual, the soak-and-dry method is the best way to ensure your Philodendron is getting the right amount of water.

In the case of black gold, you’ll want to stick your finger in the soil and water when it feels dry 2” to 3” inches down.

Remember to water using distilled water or natural rainwater at room temperature for the best results. Stop watering when you see moisture begin to seep from the pot’s drainage holes.

A balanced liquid houseplant fertilizer once per month during the growing season (spring and summer) can work wonders for your black gold.

Remember to dilute according to the package instructions and stop feeding in fall and winter.

You’ll need a well-drained potting mix for this plant.

Consider amending the mix (or your garden soil) with an aggregate such as perlite or coarse sand, plus an organic component (moss, coco coir, etc.).

As with most philodendrons, plenty of organic material is the secret to an entire, healthy plant.

Avoid fresh manure or overly aged materials, as these can alter the soil pH to the outside of the mildly acidic (around 6.5 is best) levels that the thai plant prefers.

Alternately, you can use the popular soilless philo mix:

Due to its faster growth rate, you’ll need to re-pot your melano plant more often than most philodendrons.

Usually, this will be every 1 to 2 years.

When you see roots beginning to peek out of the drainage holes, it’s a sign that your plant needs a new pot, no more than 3” inches wider (but one size up is fine).

If you don’t see signs of root binding, it’s still a good idea to completely replace the soil every two years to get rid of mineral salt buildup and replenish the soil’s spent nutrients.

Due to the unusual leaf orientation of this plant, there’s practically no maintenance involved.

You may still choose to wipe the leaves down with a slightly damp cloth or some neem leaf shine occasionally to help discourage infestations and keep the leaves shiny.

Just be sure to avoid commercial products as the velveteen texture makes this plant more vulnerable to moisture damage such as leaf spots.

You can also lightly prune the plant during the spring months to remove any damaged or diseased leaves, but this is an infrequent event if the plant is being adequately cared for.

How To Propagate Melano Plant

While it’s possible to grow this plant from seeds, the inflorescence is undesirable on the rare occasion it even appears.

Instead, most growers propagate through stem cuttings, and the more adventurous enjoy using air layering – both of which tend to be highly successful options.

This plant is not cold intolerant but can handle minor dry spells in a pinch.

Meanwhile, bacterial leaf spot and root rot are the most common disease risks. However, you might quickly encounter minor fungal infections such as powdery mildew and sooty mold if there’s honeydew present from sap-drinking bugs.

As with all philodendrons, this plant contains calcium oxalate, an indigestible substance.

The crystals may cause kidney stones in adult humans but otherwise result in mild symptoms such as nausea or vomiting. However, the smaller the consumer, the worse the effects.

Children can experience a broader range of symptoms, dogs can get moderately ill, and consumption of the crystals can be deadly to cats and birds.

While black gold philodendron can be dangled from hanging baskets, its true beauty shows when allowed to climb.

Loosely bind it to a bamboo or moss pole and let it climb up the side of a bookcase or take over a corner of the room.

Outdoors can make an extraordinary statement when allowed to climb trellises but must be given shelter from direct sunlight and drafts.