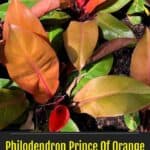 Unless you’ve been hiding under a rock or are brand new to the wonderful world of philodendron (fil-oh-DEN-dron) hybrids, you’ve probably heard of the McColleys.

Robert McColley is the creator of the famous Philodendron King of Spades. His wife Cora invented McColley’s Finale.

Many plants created by fellow Florida cultivator Howard N. Miller have had their patents assigned to Cora over the years. This includes the unique Philodendron Prince of Orange.

This unique perennial standout member of the Araceae family breaks almost all of the common attributes of philodendrons.

Note: Prince of Orange is often confused with Philodendron’s ‘Tricolor,’ but they’re not the same plant. The Tricolor’s midribs are perhaps the easiest way to tell the two apart.

The confusion extends to many other philodendron varieties, often called tricolor philodendrons, because the leaves change colors as they mature.

One unique aspect of Prince of Orange is its specific creation for indoor growth.

As a result, this peculiar stemless plant has a more compact design. It grows into a rosette instead of most philodendrons’ usual trailing or climbing nature.

It’s considered a self-header. Erect to nearly erect petioles emerge from a stubby round crown with a concave top and measures half as long as the leaves it supports.

A year-old plant generally measures 18″ to 20″ inches tall and about 36″ inches wide. Its fast growth rate doubles its size annually. Still, no official sources suggest this plant will ever grow higher than 24″ inches.

Of course, the real attraction is this plant’s low-lying foliage, which unfurls as a glossy, bright orange.

As they mature, they turn to apricot, then either a yellow-green, light green, or medium green.

The midriffs remain a pale green color in contrast with the pinkish-red petioles.

The juvenile leaves can take on an almost coppery tone depending on the light exposure.

The leaves are ovate, maturing to a length around 12″ to 14″ inches. The widest point measures around 7″ to 8″ inches across.

The inflorescence is rare and unimpressive, usually white in coloration.

Prince of Orange scorches easily in direct sunlight, but it can handle morning sun with afternoon shade.

It likes bright, indirect sunlight or filtered light, yet is also quite comfortable in medium light.

This preference makes it perfect for dorms and offices.

So 40% percent is more than enough, although it often shows its most vibrant colors at 50% percent or slightly higher.

The perfect temperature range is 60° to 90° degrees Fahrenheit. Warmer temperatures will give the juvenile leaves a more coppery appearance than orange.

Unlike most philodendrons, being in a room with an air conditioner is not a problem. Avoid exposure to temperatures or drafts below 55° degrees Fahrenheit.

This plant is meant to grow indoors, but many growers claim it does fine outside in USDA hardiness zones 10-12. In this case, it’s best to keep it in a container and bring it inside when the temperature cools off.

Prince of Orange can handle a little neglect, so it’s better to underwater than overwater.

But, if you use the soak-and-dry method, you’ll only underwater if you’re on vacation.

Stick your finger in the soil and water if it feels dry 1″ to 2″ inches down.

Water slowly and thoroughly until you see moisture seeping from the drainage holes. Then, workaround the plant and avoid the foliage.

Here are some options:

A loose, well-draining mix such as one for cacti or African violets works best.

A little added perlite or vermiculite will keep the soil from compacting.

Or, you can use pure sphagnum moss or a mix of peat and perlite.

As for pH levels, this plant isn’t picky and can handle anything from a highly acidic 5.0 to a neutral 7.0.

You’ll likely need to repot this plant every 1 to 2 years, either due to root binding or to replace the potting medium.

Only graduate to one container size larger when dealing with a rootbound plant.

There is no need for pruning outside of removing damaged or diseased leaves. There are no stems for the plant to grow leggy.

It’s good to wipe down the leaves once or twice a week to remove dust and keep them nice and shiny.

You may also wish to remove the blooms if they appear.

How To Propagate Philodendron Prince Of Orange?

Prince of Orange is a stable but complex cultivar. Thus, it is impossible to propagate through seeds.

The most common method of propagating outside tissue cultures is through offsets that form on mature plants’ crowns.

There is also some evidence that cuttings may work. But as this is a stemless cultivar, any such cuttings will have to come from the petioles or leaves.

Prince Of Orange Pests Or Diseases

This cultivar is more resistant to bacterial leaf rot and fungal leaf spot.

Yet, it remains susceptible to root rot and powdery mildew.

It’s not particularly prone to infestations, but look out for these:

This plant has a high concentration of calcium oxalate crystals, making it toxic.

The low, broad rosette makes this plant perfect for a tabletop display or in a tall planter.

Its bright colors are a great way to liven up a room.

Also, it is less fussy, making it an excellent choice for offices and dorms where conditions aren’t always optimal.

The presence of calcium oxalate crystals classifies it as a “clean air plant.” Thus, it will help remove dangerous toxins such as formaldehyde and benzene from the air.