Native to the mountainous regions of Central America and Mexico, the plant is distinguished because of its multicolored seeds and scarlet red-colored flowers.

The plant is widely cultivated in Southern America as well. 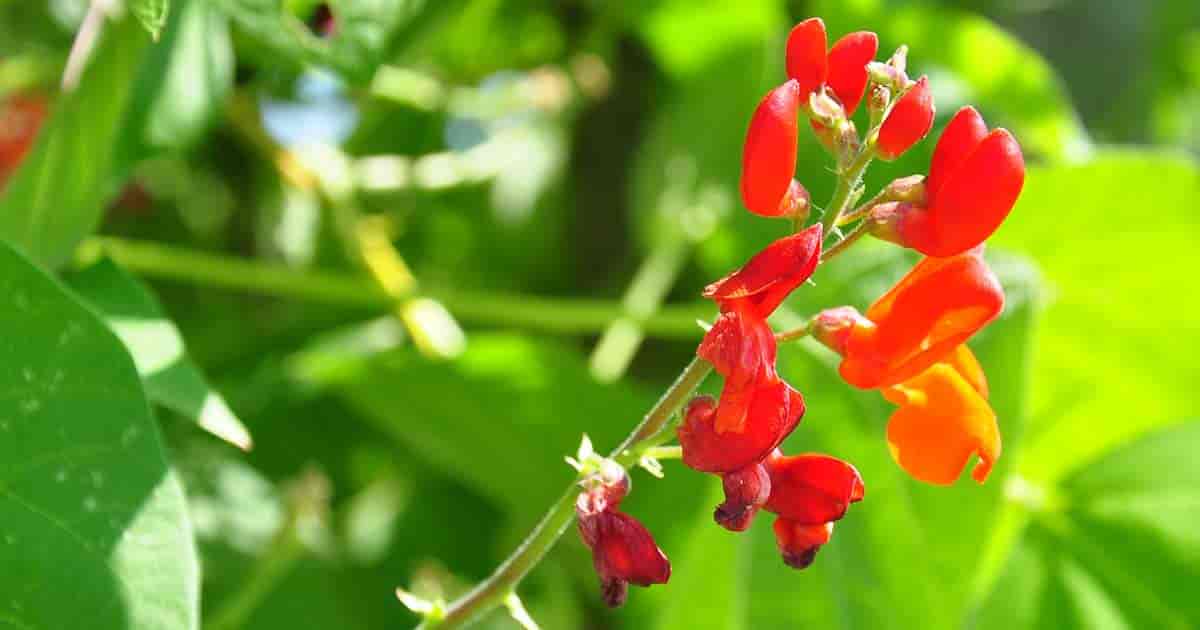 Phaseolus is a Latin name for bean and Coccineus means scarlet, hence the name scarlet beans.

It differs from the Phaseolus vulgaris common bean (P. vulgaris) in several respects: the cotyledons stay in the ground during germination, and the plant is a perennial vine with tuberous roots (though it is usually treated as an annual).

You may also hear it called by its common name including:

P. Coccineus plants grow at higher elevations than the common variety of beans.

Open wooded, grassy areas, steep slopes, edges of a cloud forest, and sides of stream beds are the natural habitats of the plant.

Phaseolus Coccineusvines grow quickly; they can easily grow up to 8’ – 12’ feet height on a trellis in a single season.

Phaseolus Coccineus usually starts to flower after about 40 to 60 days of sowing the seed.

Since it needs long-day conditions to flower, the plant blooms well in temperate regions where the temperature is ideal.

The bloom time starts from June and lasts till October.

Phaseolus Coccineus produces flowers in abundant quantities, even during the hot weather and flowering usually continues till the beginning of the frost season in fall.

The flowers grow in clusters along the vines up to 20” inch long.

However, they are short-lived; flowers only last for a day from sunrise till sunset.

When grown as a food crop, regular harvesting of immature pods should be done as it promotes extra flowering, which then will lead to higher yields.

Some plants will have white flowers and white seeds.

While the young plants can get severely damaged at 34° degrees Fahrenheit (1° C), Phaseolus Coccineus can survive below freezing temperatures when dormant.

In the growing season, red scarlet bean plants require a warm and sunny position; they thrive in full sun.

However, excessive watering can cause rotting of the roots.

For best results, add a significant amount of bulky organic matter, like garden compost, in the soil.

It helps to retain moisture, which is essential for the growth of a good crop.

Phaseolus Coccineus prefers soil within the pH range of 5.5 to 7 but can tolerate soils from 5 to 8.2 pH.

But, it needs protection against slugs.

They seem to adore the plant’s young shoots appearing in the spring.

The scarlet flowers of the runner bean plant are known to attract hummingbirds, bees, and butterflies.

How to Propagate Scarlet Runner Bean

Propagation of Phaseolus Coccineus is done through seeds.

Capable of being done indoors, in pots, around 4 to 6 weeks prior to the last spring frost.

However, most people prefer to plant the seeds in the ground after the end of the frost season.

The seeds can easily germinate in moist soil within ten days.

To ensure growth, soak the seeds in warm water for about 12 hours before sowing.

Don’t grow near fennel, it will prevent growth.

Phaseolus Coccineus is not prone to any serious disease or pests.

However, it may get affected by anthracnose (causes cankered pods), bacterial blight (which causes irregular brown blotches on leaves), or mosaic viral disease (results in yellow-mottled, stunted leaves).

The plant should be watched for leafhoppers, maggots, aphids, Japanese beetles, and Mexican bean beetles; the last two may cause holes in the foliage.

The plant is widely cultivated both as food plants and for ornamental plants.

As a food crop, Phaseolus Coccineus has been cultivated since 900 AD in tropical as well as temperate regions of the world.

The edible bean seeds (green pods) of the plant are widely used as food (green beans), in both fresh and dried forms.

The edible pods, however, are only edible when they are young.

The natives of Central America have also been eating its starchy roots for a long time.

In some parts of the world, the flowers are also eaten by adding them to salads.

In some parts of the world, the roots of Phaseolus Coccineus plant are also used for treating swollen eyes and malaria.

Coccinin, a type of peptide naturally found in the seeds of runner beans, has also shown effectiveness against a number of fungal infections and for inhibiting proliferation in leukemia cells.

Phaseolus Coccineus is also widely grown for ornamental purposes due to its bright-colored red flowers.

The most common areas for their growth are pergolas, fences, porches, and patios.

Use the plant as a cover on a chain-link fence or up a trellis to screen an unattractive view.