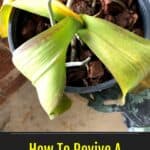 There’s always a tradeoff when growing plants indoors, although the benefits often outweigh the drawbacks.

For example, epiphytes such as pothos or philodendrons tend to reach only about 1/10 their natural height and rarely bloom.

The tradeoff, however, is being able to grow them in almost any hardiness zone and a much easier time providing care.

But there are sometimes other drawbacks that can harm or even kill a plant that isn’t used to being indoors.

Orchids are slowly becoming more popular indoors than outdoors, and many growers are discovering their plants are suddenly dying when they should be thriving.

How To Revive A Dying Orchid?

When growing an orchid like the moth Phalaenopsis orchid, especially indoors, it’s easy to make mistakes in providing care.

Whether your orchid is in the garden or living room, the following potential causes of a dying orchid and the solutions can almost always bring your orchid back from the brink.

Crown rot is a real problem for certain plants, including orchids.

In nature, orchids often grow at odd angles, preventing moisture from collecting in the crown, but this isn’t the case when grown in your home or garden.

Outdoors, it can be difficult to avoid rain getting into the crown, but indoors, you can prevent it by only watering the soil itself and not misting your orchids.

Crown rot is a difficult disease to come back from.

You will need to uproot the plant and remove any damaged roots with a sharp, sterile knife to resterilize between each cut.

Spray the entire plant down with 3% percent hydrogen peroxide and allow it to air dry.

Repot the orchid in a fresh pot with a new potting medium and spray the crown with fungicide.

Alternatively, many orchid lovers swear by ground cinnamon and will sprinkle that on the crown as a natural antifungal.

At this point, it’s, unfortunately, a waiting game to see if the plant recovers.

The dangers of fertilizer burn aren’t brought up often enough.

Fertilizers contain natural or artificial chemicals that can cause chemical burns to your plant’s roots and stem if they come in direct contact.

Using more than the recommended dose of fertilizer will build up chemicals in the soil, resulting in damage to your orchid’s roots.

Similarly, getting fertilizer on the exposed portions of the plant can cause severe burns that can’t be healed.

If you suspect you’ve overfertilized your plant, give the soil a good flush.

This usually involves placing your orchid in the tub and running the showerhead over the soil for 20 to 30 minutes to flush toxins out of the drainage holes.

This method can help, but you need to be careful, as it can lead to root rot or fungal infections if done improperly or too frequently.

A safer option is to repot your plant in a fresh potting medium.

Be warned, if the plant is in bloom, you will likely lose the flowers, and the plant will go through a period of transplant shock where it might not appear to be recovering.

When repotting, prune away any severely damaged roots with sterile, sharp tools and give the root system a good rinse or soak to ensure all of the chemicals are removed.

Skip the next feeding session or two to give the plant time to recover and grow new roots.

Poor watering habits can result in many problems, such as:

Overwatering is especially dangerous, as it invites fungal infections and can also lead to root rot.

In cases of severe overwatering, you will need to repot the plant, but otherwise, your orchid will usually recover in a few days once you switch to the soak-and-dry method.

This method entails sticking your finger in to see how far down the soil has dried.

Root rot is one of the most dreaded diseases and can be caused by several different strains of bacteria and fungus.

The rot attacks your plant’s roots, resulting in symptoms similar to fertilizer burn or underwatering, and there may be a foul odor coming from the soil.

Treating root rot requires you to do the following steps:

Like most tropical plants, Orchids are adapted to live under a forest canopy.

This means direct sunlight can scorch the plant’s leaves when exposed too long.

Bright, indirect sunlight is the best way to go, but you can also place the plant in a window where it will get full sun in the morning or evening and is shaded in the afternoon.

Sunburned leaves will look a little singed or brown around the edges and may feel crispy.

The good news is that simply moving a plant getting sunburned out of the sun’s rays will stop the damage.

Any sunburned leaves can be pruned away, but they will generally fall off on their own after a few days as the plant begins to bounce back.

Just be sure to check the soil, as a scorched plant is likely to be sitting in dry soil.

Temperatures above 85° degrees Fahrenheit will cause the plant to wither and stop growing.

This can lead to leaf drop, bud blast, or other consequences.

On the other side of the coin, the plant will attempt to go dormant if the temperature drops, and it can suffer permanent damage as temperatures dip below 55° degrees Fahrenheit.

It will generally recover if you catch excess temperatures soon enough and get your orchid back into a safe temperature range.

However, some severely damaged portions may have to be pruned away to encourage new, healthy growth.

Orchids are also known to suffer temperature shock due to sudden changes, so keep them away from air conditioners, vents, or doors that are frequently opened or closed.