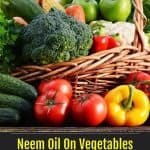 Growing your own produce (vegetables) is both rewarding and time-consuming. The latter usually happens because you don’t want to use harmful pesticides in the garden.

Instead, you might use complimentary planting (sometimes called companion gardening) or research home remedies.

Still, there’s always a risk of infestations or disease. But there’s one miracle product out there that can combat all of these things with very little effort on your part.

That product is neem oil.

But can you safely use this miracle cure on your food?

Can You Use Neem Oil On Vegetables?

The good news, you can spray neem oil on vegetables or fruits.

However, there are a few things you should know before treating your garden.

What Neem Oil Does

Neem oil is the natural extract of Azadirachta indica.

In its pure form, neem oil contains at least five known insecticidal ingredients, the chief of which is Azadirachtin.

Azadirachtin has a chemical makeup that mimics hormones found in most insects.

When ingested, the neem creates a number of side effects, including:

Then the Azadirachtin is extracted from raw neem, the resulting clarified hydrophobic neem oil becomes a contact poison, clogging the airways of any insects that get soaked by it.

This makes it useful against many common fungal infections such as sooty mold and can even help your plants fight off root rot to some extent.

While neem oil is generally safe and even used in a number of healthcare products, there are still some concerns.

DO NOT use neem if:

Azadirachtin has been known to cause seizures and other severe effects in small children. Some evidence suggests it can cause miscarriage or other complications during pregnancy.

Honey and many other natural products carry similar risks during pregnancy and infancy, so this should be cause for caution, not alarm.

When in doubt, talk to your physician before using neem products.

When used responsibly, neem oil isn’t a threat to bees, ladybugs, or other beneficial insects.

However, it’s important to use any sprays at either dusk or dawn to avoid harming these garden friends.

Always remember, neem oil doesn’t discriminate but also dissipates quickly if applied topically, so when you apply is important.

Neem is also mildly toxic to aquatic life, so avoid using near ponds or creeks.

By far, the safest and most common use of neem oil is in foliar sprays.

Next, mix in 2 teaspoons of clarified hydrophobic neem oil and put the mixture into a spray bottle or garden sprayer.

To apply, spray the entire plant, being sure to get the undersides of leaves and any crevasses.

The neem will dissipate in 45 minutes to an hour.

Reapply every other day for two weeks or until the problem is gone.

You may also do an application every 14 days as a preventative.

Foliar sprays are the safest option for expecting mothers and children.

Simply wait at least one full day after the last application before harvesting and wash your produce thoroughly.

This should not only ensure there’s no liquid neem trapped in a crevasse, but it will also remove any traces of soap left behind.

While it’s the safest method, note that foliar sprays take more time and effort than other options.

What Concentration Should I Use?

Clarified neem comes in concentrations, generally ranging from .5 to 3% percent.

The different amounts represent how much Azadirachtin remains, and these concentrations each excel at certain tasks:

While there are other percentages out there, these are the three you’ll use most often.

The opposite of foliar sprays, neem soil soaks are the easiest to apply but the most potent.

A soil soak is made the same as foliar sprays, except you will be adding two tablespoons of 100% percent cold-pressed raw neem oil per gallon.

To apply, choose a day when you would normally water the plant and pour 2 to 4 cups of the mix directly onto the soil around your plant’s roots, being careful not to splash the plant itself.

The neem will last anywhere from 3 to 22 days in the soil, but most will be absorbed by the plant roots.

Once absorbed, the neem becomes a systemic insecticide and will remain in the plant for up to 22 days.

As it mixes with the plant sap, only pests that chew or pierce the plant will be exposed.

There is no evidence to suggest that fruits like tomatoes and other berries or vegetables contain neem from this method, but it is best to err on the side of caution as needed.

Perhaps the most underappreciated type of neem, neem cakes are the solids left from producing neem oil.

The cakes only contain trace amounts of oil and are used as a fertilizer with an NPK, usually around 4-1-2.

Follow any instructions on the package and note that neem cakes will only affect ground-based pests like grubs.

As there is very little neem oil in the cake, it shouldn’t be a risk to infants.

However, there is no firm data on whether any neem makes it to the produce from neem cakes, so use your discretion.