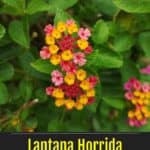 One of the fun aspects of gardening is the attempt to tame nature and coexist with it. A good example of this is the Lantanas, a genus of flowering shrubs in the Verbenaceae family known for their beauty and status as a sometimes invasive weed.

There are around 150 different lantana species, but not all of them are welcome. One particular species that fits right on that borderline between beloved and unwelcome is Lantana horrida (lan-TAN-a HOR-id-uh), better known as the Texas lantana.

This perennial native of Central America gets its species name from the fact that its leaves have a strong odor which can be quite aggressive to more sensitive noses.

What Is Lantana Horrida?

As mentioned, Texas lantana is a flowering shrub that grows throughout Central America, although it doesn’t grow natively north of Texas. While the plant is generally easy to care for, it often suffers from a case of mistaken identity that can make growing it a little less fun.

There are two other plants commonly confused with Lantana horrida and also bear its common name.

Lantana camera is a highly invasive weed that can form thick hedges and often creeps into farmland, where it poses a toxicity risk to livestock.

Many of the warnings you hear about L. horrida are actually referring to this plant, which has a similar appearance.

The other doppelgänger is a species known as Lantana urticoides, which is found growing natively in Arizona, Texas, and New Mexico.

Part of the reason these two are often confused (especially with plant care sites) is that this plant has many attributes formerly thought to be an offshoot of horrida itself before being identified as its own species.

Identifying Lantana Horrida By Its Blooms

So how do you tell these three plants apart? Well, the easiest way is through their flowers.

It should also be noted that the petals have a more coarse texture, and the scent given off by crushing its leaves is much stronger than in the other two lantanas.

Lantana urticoides, meanwhile, begins blooming in early April and lasts until the first frost. Unlike the other two species, this plant only has blooms in orange, red, and yellow, so if you see a lantana with more than these three colors or failing to bloom until summer, it’s not a Lantana urticoides.

As for the infamous Lantana camara, the flowers have softer petals and have a curious habit of turning pinkish or orangish when fertilized, presumably to make pollination more efficient.

This more compact plant blooms from midsummer until the first frost, and unfertilized blooms tend to be vibrant purple, red, white, or yellow hues.

How To Grow Horrida Lantana?

Its wide oval blue-green leaves are quite attractive in their own right but provide a perfect background when the plant flowers.

The plant can become unsightly in winter, as the fuzzy gray stems become visible. These stems can become woodier and increasingly visible among the foliage if not pruned.

One thing you will rarely have to worry about is soil quality. This plant prefers loose, sandy soils with a pH of 6.5 to 7.5 but can also survive on barren land.

For the best results, give it a little mulch each spring, although it will still thrive without fertilizer.

If you’re growing this plant in a container, aim for a sandy mix or add plenty of aggregate, such as perlite or vermiculite.

While Texas lantana can survive in bone-dry soil for short periods, it cannot handle wet or soggy soil, so drainage should be your primary concern no matter where you plant it.

Lantana horrida has a more restricted northern range than its two close siblings, being limited to USDA hardiness zones 8a to 11.

However, it’s extremely robust in drought and heat waves, allowing it to thrive when most other plants struggle.

It loves full sun and rarely requires shade during midday.

Humidity isn’t an issue, but it’s best to keep it under 50% percent. Normal household humidity is fine, but anything above that will result in fungal infections.

Texas lantana needs consistently moist soil until the root ball has become established, but you can safely neglect it after that.

Ideally (and especially when growing in containers), you should water using the soak and dry method whenever the soil becomes dry 1″ to 2” inches down during the growing season.

However, a well-established plant generally won’t mind if you forget to water it here and there.

When growing lantana in containers, repot every 3 years or when the plant becomes root-bound.

You can transplant seedlings or established plants outdoors once the threat of frost has passed.

Question: The lantana which I planted from seed last year did not bloom. What are their requirements?

Answer: Lantanas prefer poor soil. Rich soil produces leaf growth and discourages flower formation. Plants should be set out after warm weather arrives and should have full sun if they are to bloom freely.

It’s best to prune Horrida in spring. You can cut Texas lantana back by up to ⅓ of its size during this time. Doing so encourages new growth, and your shrub will spring back quickly.

You can also do some maintenance pruning throughout the growing season.

Remove any berries as they appear if you don’t want to risk the plant self-seeding.

Thanks to this plant’s prolific nature, you can propagate it through division or stem cuttings.

However, it will also self-seed through its grape-like berries if you allow them to remain on the shrub.

The Borg would hate Lantana horrida, as resistance seems to be its main M.O., with a list that includes:

That said, it’s known to suffer from fungal infections when exposed to too much moisture, including:

It can also be infested or damaged by harmful nematodes, lantana lace bugs, spider mites, and whiteflies.

Avoid using insecticidal soap or other products containing soaps when an infestation occurs, as the plant is highly sensitive.

The other thing to be aware of is that this plant is toxic to both humans and pets.

The attractive, grape-like berries are highly attractive to birds, which can safely consume them, and the flowers will attract a wide range of pollinators.

However, these berries are highly toxic to mammals, and despite some claims that the berries are edible once ripe, there is no scientific evidence to support this claim.