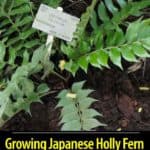 It is one of the types of indoor ferns grown for its sturdy decorative beautiful look and offers a touch of color to any location.

These also look great in outdoor gardens to enhance the landscape.

Cyrtomium Falcatum is a perennial plant and includes light brown large rhizome, which is covered thickly with furry scurf.

The plant height reaches 24″ inches and is made up of various bright green shiny leaflets.

Every leaflet has a wavy to flat, to faintly toothed margin, as well as a netlike veining pattern.

The underside of all the leaflets features sori under black or brown indusial.

The spores which are formed in tiny patches on the leaflets’ underside are initially greenish, but with time, they start turning a shade of light brown.

Ferns do not flower and have no flower fragrance.

This plant prefers filtered bright light but can tolerate poor lights as well for a short period.

Therefore, place this plant in a bright position and move it to a better light periodically for a couple of hours, after every two days.

So, place the pot on a tray filled with a few damp pebbles.

Check the soil surface, if it feels dry upon touching, it is time to water the plant.

Wait for the moist soil to dry out between watering.

If you have placed this plant in a warm position, then it won’t need any winter resting period.

Water more sparingly if the temperature indoor gets to 54° degrees Fahrenheit (12° C) or lower for a few days.

Give this plant a liquid fertilizer after every two weeks if it is a young growing plant.

This plant grows best in a moderately fertile, moist, humus-rich soil which is well-drained.

Make sure you plant this fern under a shelter and mulch well using a straw during winters.

Repot the plant during springtime in a pot which is one size larger than the previous one.

Use a standard pot mixture of coarse peat moss or half leaf mold when re-potting.

The plant prefers well-drained, acidic soil with a pH between 4.0 and 7.0, and thrives in rich soil high in organic matter.

This plant is tough when you grow it indoors as this fern can tolerate gas fumes, low lights, and dry air far better than any other ferns.

It begins shedding during the harsh cold season but thrives during warm climates.

It only requires a bit of grooming when its foliage becomes unsightly or frayed.

The leaves will begin re-growing once they are cut but make sure you don’t damage or cut into the crown.

How To Propagate Holly Fern

Propagate this plant during the early spring by pulling apart old plants.

Its rhizome is hidden in a root ball but can break into different sections easily.

It is ideal to use the rhizome section with a few dark green fronds as they can typically grow feeding roots effortlessly.

Be sure to plant it around 3” inches below the pot surface in a standard medium, which is well moist.

Place the pot under a filtered bright light and water often till it starts growing.

Collect the ripen spores on a paper and sow them during winters on dampened peat moss.

The root of this evergreen fern can start rotting (root rot) when overwatered so make sure you empty the pot of any stagnant water after watering.

Aside from this, fungal spots might become a problem in damp conditions.

To treat this, use an appropriate fungicide and remove dead fronds and wilting leaves when new growth begins.

In general holly ferns are deer resistant, and keep on the lookout for scale insect bugs.

Be careful using any pesticide containing oils on ferns.

This plant is used in partial shade to full shade areas, used in woodland gardens, rock gardens or as ground cover.

They look great as borders for shrubs or trees.

Moreover, Cyrtomium Falcatum also works well as fillers in beds with Caladium, Impatiens, and Hosta species or along with ferns contrasting in texture and color.

This is often used as a porch plant or an indoor houseplant.